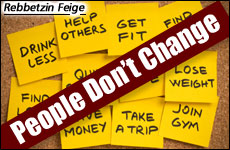 I never live up to my New Year’s resolutions. So this Rosh Hashanah, why bother trying?

Every year Rosh Hashanah comes around and I commit to changing something, and by the year's end, I see I'm the same person. It's hard to take myself seriously anymore and muster up the commitment to try to change again this year. How can I really make this year different?

-- On The Verge of Giving Up

Your lament and frustration over what appears to be the futility of New Year’s resolutions is common to most of us. We would all like to look in the mirror at year’s end and see a changed person. Since that usually doesn’t happen, the teshuva process strikes us as somewhat of a charade, a hypocritical exercise. Whom are we kidding?

But there is some good news. Our sages comment that if we are sincere at the time that we commit to change, to moving in a positive direction, regardless of what in fact ultimately happens, the momentary process is very precious in the eyes of the Almighty. The moment of genuine desire to repent, to do more and be more than the past, is not cancelled out by our inability to live up to that goal long term.

The genuine desire to repent is not cancelled out by our inability to live up to that goal long term.

A point of reference in our collective history includes that glorious defining moment when we experienced the awesome revelation at the time of receiving the Torah. We all stood at the foot of Mount Sinai and pledged our commitment to God and His Torah. Alas, a mere 40 days later, when Moses was late in coming down from the mountain (due to a matter of miscalculation on their part) the nation was complicit in an act of idolatry, the creation and worshipping of the Golden Calf. The people of Israel had figuratively descended from the “top of the mountain to the bottom of the pit.” Yet, we did not lose our status. We remained God’s chosen people. Moreover the holiday of Shavuot commemorating the receiving of the Torah is celebrated annually as the high point of our history – a time forever remembered by God and man alike as the apex of the commitment and dedication. Nothing, not even the unfortunate lapse that occurred so soon afterwards, could take that moment away from us since the resolve and intention at the time it happened was real and genuine.

The Almighty, in His compassion, takes into account our flawed human nature and one of our more serious failings is our inability to follow through when habit and routine take their toll.

But do not give up before even trying, my dear reader. There are tips and safeguards that we can put in place to increase chances of success.

King David spent a lifetime of trying to atone for his illicit encounter with Batsheva – an event inappropriate for a man of his stature. “My sin is in front of me always,” he exclaims in the book of Psalms. Our sages explain that King David was not saying that he was in a constant state of wallowing in guilt over his misdeed. The word “Chatosi,” used for sin, alternatively means “my vulnerability.” “My vulnerability is before me always,” was the statement King David was outlining for us a path for steering clear of past behaviors. He suggests that we identify and remain mindful of our vulnerability to a particular behavior. In so doing, we will be vigilant to avoid falling prey to the given weakness.

Sarah, a woman of great substance, shared that her lurid past made her into a very judgmental person. She judged herself harshly and had unreasonable expectations of others that guaranteed their disappointing her. Because she was aware of the dynamics of her situation, she came periodically to counsel with me and get an adjustment that would bring more balance to her life.

Gossiping was Karen’s Achilles heel. Recognizing her proclivity to share information about others, she invoked the pause button. She took a moment before speaking to envision the potential damage to the person’s life and well-being that her gossip would generate. She asked herself if the enjoyment derived from passing on toxic information was worth the harm done. Subsequently, there was a dramatic drop in her gossiping incidents.

Rachel’s nemesis was negative thinking. Ultimately, she realized that we create our reality by the thoughts we entertain; therefore, since we are the thinkers, it is our prerogative to choose which thoughts to engage and which to let go.

Jack was quick to anger. Steering clear of volatile subjects or absenting himself when a situation got heated protected him from his vulnerability to lose his cool. Moreover, Jack was advised to institute a system of rewards and penalties. If he succumbed to a fit of rage, he would have to pay $500 to a given charity. It worked like a charm. Needless to say, his outbursts were few and far between.

Another tool that is extremely effective is to get a “sponsor.” When one

begins to falter and feels that they are losing ground, having a person in place who is or has been on the same journey is extremely helpful to mitigate against “falling off the wagon.”

Recognizing the enemy, our particular vulnerability, gives us the advantage of preparing for or preempting situations that might undermine the possibility for change.

Say it Out Loud

Another way to optimize the effectiveness of our resolutions, Jewish sources advise us to verbalize our objectives. The spoken word creates a reality, a presence, unlike thoughts alone that are fleeting. Articulating our goals out loud to a friend, spouse, a mentor, etc., will increase the likelihood of their becoming a force with which one is more likely to reckon and take seriously. In fact, words, pronouncements uttered by God, brought the world into being. Human beings, created in God’s Image, likewise have the capacity to create our worlds, the reality in which we exist through the medium of the words that we utter.

Additionally, our sages urge us to follow a moment of inspiration with behaviors so as to concretize and sustain insights. Attending classes of spiritual content, or a program of learning and study one-on-on is a powerful medium to maintain our awareness of the values we would like to strengthen and the growths we would like to achieve. A learning partner of once a week for an hour or a daily phone session of ten to fifteen minutes can make a huge difference.

Rabbi Orlofsky of Jerusalem likened the temporary efficacy of resolutions to photographs taken at a family wedding or Bar Mitzvah. He pointed out that the resulting pictures, particularly of the women made up and elegantly attired, bear little resemblance to the day-to-day appearance of the same woman. Nevertheless, the pictures are displayed on the wall and in albums for all to see.

Why, he asks, does the woman take such delight in viewing herself in those pictures where she looks so different than she does typically? Isn’t she buying into an illusion? His answer is an illuminating insight into human psychology. He states that though the woman may not, in her current state, match the picture on the wall, she knows nonetheless that since she did once look like that, the potential exists and should she so desire, she can replicate that appearance.

Similarly, dear reader, we have moments, especially in these days of personal inventory prior to the High Holy Days, where we sincerely commit to moving forward in realizing our as yet untapped potential. Somewhere along the line, we might lose sight of the vision that we entertained for ourselves at the outset but with some effort we can visit that vision more and more frequently, and drop by drop, in small increments, there will be a perceptible difference.

Finally, dear reader, don’t judge yourself too harshly. Give yourself credit for victories attained, no matter how small they seem to you. Remember that success breeds success. And, of course, partner with the Almighty and enlist His help. With God’s help and your genuine desire, undoubtedly you will be blessed with a good and fulfilling year.

The Urgency of Change

This Yom Kippur, Enter a Radically Different Place
The Promise Of The Land
Which Chat Are You On?: Parshas Behar/Lag Ba’Omer
Do You Like Slow-Cooked Food? Thank the Jews
Comments
MOST POPULAR IN Atonement
Our privacy policy