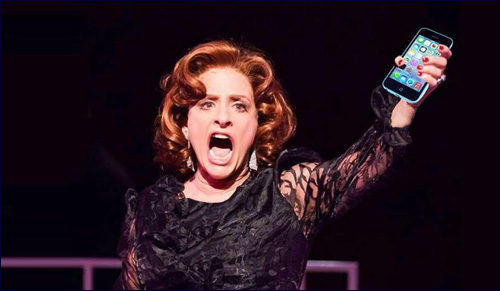 She took the texting scourge into her own hands. Let’s follow suit.

Texting is not just a problem while driving, it’s a problem in our society in general. It is getting in the way of relationships, jobs and even entertainment. It has become an obsession that seems to have taken over our minds and our actions.

At a recent Broadway performance, Patti LuPone took matters into her own hands. Having already experienced four cell phones going off during her matinee performance of “Shows for Days” Ms. LuPone was out of patience – and who can blame her? It can’t even be considered accidental since there is an announcement before EVERY performance reminding theater goers to turn off their cell phones. It seems to be a basic level of human consideration and decency. Although apparently not for everyone…

At the evening performance on the same day, there was a woman sitting at the end of the second row texting throughout the show and not even making a pretense of being interested. (Why did she come and pay those outrageous Broadway prices you might ask?) She even disturbed her husband who, ostensibly, was actually watching the show, to show him her texts.

When the second act began, the texting continued unabated. And Ms. LuPone had had enough. At the end of the scene where she normally shakes the hands of the people in the front row, she walked over and took her phone (reminds me of the high school principal at my girls’ school - which isn’t surprising because that audience member’s behavior was reminiscent of adolescents!).

The audience was on her side and I applaud Ms. LuPone for her actions. But will it really make a difference? Instead of feeling gratified Patti LuPone spoke of feeling defeated. It is making her question whether she wants to continue live stage work. And that would be a shame. Yet all behavior has consequences.

I still remember that there was a woman in my criminal law class who liked to bring her knitting. The professor was not amused and loudly and publicly berated her. While there might have been a better strategy for getting his message across, I understood his frustration. It’s not just that you work so hard and someone appears uninterested. It is distracting. It makes it hard to concentrate. It affects the mood in the room. It is, not to put to fine a point on it, rude.

And, unlike high school, attendance at a Broadway show is not mandatory. If you would rather sit and text, save yourself the money and wait outside. Or go to Starbucks…It’s about time we took a stand against people who are so focused on themselves that they don’t think about the impact of their actions on others. Texting is just one example (Have you ever tried to walk down the street past a group of teenagers? Does anyone move out of the way?). I could go on and on.

But I hope more people like Ms. LuPone will take a stand. I hope audience members will react against this behavior. If we ostracize those who behave this way, their very goal (social interaction) will be subverted. But we have to be willing to take a stand.

My children showed me a clip on YouTube recently – someone parked in a handicapped parking place who didn’t have the requisite permission. I’m sure we could have a lengthy discussion about the inconsiderate nature of this action. A group of people took blue and white post-it notes and covered his car in them, creating the handicapped symbol in white amidst the blue. It was brilliant. Needless to say, he was not a happy camper when he returned to his car. Seemingly totally in character, he did not express remorse but rather anger. I don’t know if he will grow as a person from the experience but I’m willing to bet he won’t park in a handicapped parking spot again!

And I’m willing to bet that young lady, if she does go to the theater again, will not text. And probably neither will anyone who was in that audience.

We can make change – one considerate and thoughtful person at a time.

Eli and His Little White Lie

Cooking Says I Love You