Passover and My Son’s Broken Femur 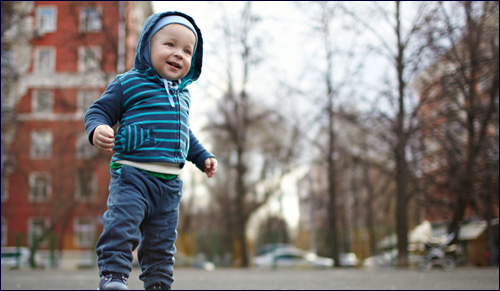 Why thank God for taking us out of Egypt? Didn't He put us there in the first place?

It was one of my most frightening incidents of being a father so far. I was studying for my MBA. It was a typical Tuesday; I was able to go home to be with my family for lunch because my classes for the day finished in mid-morning. What was atypical was the way I was greeted at the door – my son was screaming in a manner I had never heard, and my wife appeared quite shaken.

After some deep breaths, my wife informed me that she had just she tripped down the stairs holding our 9-month-old son and landed hard on the floor. She heard his head hit the tiles, but she wasn’t sure of the extent of his injury. Was he injured or just very startled?

After ensuring that my wife was okay, I held my son, eventually calming him down. But he seemed more subdued than usual and it looked as though he was in pain.

The doctor's office advised us that if he wasn't back to his regular self in another couple of hours, we should bring him in. A few hours later the doctor was checking for a head injury, but found nothing. He began to check other parts of our son's body to see where an injury might have occurred. When he stood my son up, holding his hands, my son lifted his right foot, showing that he wasn't able to apply pressure there.

We were sent for x-rays and while waiting for hours in the waiting room, we witnessed our son's gradual improvement. We almost decided to take him home because, in our estimation, everything was probably all right – and we were exhausted.

My wife and I felt a sense of gratitude. It could have been much worse had he fallen from higher up the stairs.

But the x-ray results indicated otherwise. Our son’s femur bone had a crack just above his knee and they would have to put his entire leg, from his waist all the way down to his toes, in a cast for at least a month. Our precious little boy behaved so well while they plastered his leg, after which they finally sent us on our way, with a referral to see a specialist the next morning at a different hospital to reinforce the cast with a layer of fiberglass.

Through this dramatic episode, my wife and I expressed how appreciative we were. No, a cracked femur bone for our son who was on the verge of crawling was not going to be easy, never mind all the additional time and resources that would be required during the month of my final exams. Nevertheless, my wife and I felt a sense of gratitude. We recognized that if he cracked his femur bone from a short fall (only a few steps up from the ground), it could have been much worse had he fallen from higher up the stairs.

But I remember being asked, somewhat incredulously: Appreciative?! He fell down the stairs and cracked his femur bone and his walking was delayed by a number of months! Was I appreciative that God made my wife and baby fall?

And then an interesting parallel occurred to me. Passover was a few days away. Millions of Jews from around the globe were going to be celebrating the fact that God miraculously saved the Jews from 210 years of grueling slavery and led us into the Land of Israel.

But why thank God for taking us out of Egypt? Didn't He put us there in the first place?

This question weighed on me for a couple of days, until I watched a near-horrific incident which clarified everything.

Over Passover while my wife and I were taking a pleasant stroll down the street, we saw halfway up the block a young mother pushing her infant in a stroller while her husband walked alongside their toddler daughter. Suddenly the young girl turned and headed for the street, running at full speed. On cue, just like it happens in the movies, a car appeared, moving too fast for driving on a residential street. Everything seemed to move in slow motion: the father's shocked expression as if he were thinking N-O-O-O-O as he chased after his daughter, while the mother watched helplessly, in horror, from the side.

My wife and I stood there stunned, not knowing how to prevent the seemingly inevitable from taking place. The girl was darting into the road and the fast-approaching car did not seem to see her.

Then a small miracle happened. The little girl tripped and fell hard onto the ground. Astounded, her mother and father scooped her up and embraced her, feeling renewed appreciation for having her in their lives.

After my wife and I let out a sigh of relief, we watched an interesting scenario unfold. The little girl was crying in pain and her parents were just so happy and appreciative. The girl looked at them, confused: Don't you love me? Don't you care about me? Why are you so happy when I'm in so much pain?!

This taught me a powerful message. Very often I’m like that little girl. My scope of understanding is limited and there is a Higher Source whose view far surpasses that of my own. He sees what came before and what will come after; He knows what is truly best for me, even though I think I know better. And most importantly, He loves me and cares about me far more than I can possibly fathom.

Just like that little girl, I can cry and get upset that I got hurt. But if I recognize that what just happened was done with the greatest attention, love, and care possible, I rise above that arrogant spirit inside of me that feels like it knows it all.

We naturally like to feel that we are in charge, that we know it all. But letting go and realizing our limitations is perhaps one of the greatest gifts we can give ourselves. Leaning on the Source far wiser than ourselves provides us with a great sense of comfort, serenity, and happiness. Everything does happen for a reason – a reason that is ultimately for our greatest benefit. If we can internalize the fundamental principal that God loves each and every one of us far more than we can possibly comprehend, then we can begin to inch toward understanding how the different variables in our lives were uniquely tailored for us, allowing us to reach our individual mission in this world.

What you can accomplish, I cannot; and what I can accomplish, you cannot. Therefore, we each are given different circumstances in which we lead our lives. Our families, our unique talents, our geographical setting are all designed solely with us in mind, serving as our guidepost for direction.

With this in mind, generation after generation, we have been celebrating Passover – thanking God for having taken us out slavery – because we understand that, notwithstanding the apparent need for us to be there (commentators provide numerous reasons for this), we are eternally appreciative for having been taken out in such a miraculous fashion.

The little girl who tripped taught me an invaluable lesson. As much as her parents might have tried to explain to her that had she not tripped she could have been hit by a car, she was simply too young to have understood.

So, too, with us – if we recognize our smallness, we can truly reach a level of greatness.

Excerpted from the newly released book, The Gift of Stuttering (Mosaica Press, 2016).

Moe is the Founder & CEO of Winfluencers, an early-stage startup that empowers micro-influencers to monetize their passion. Previously, he was the Head of BizDev for Hometalk, Strategy Consultant for Deloitte, and Regional Director for the Lauder Foundation. He holds an MBA and semichah, and published his first book, The Gift of Stuttering (Mosaica Press, 2016). He also teaches a Daf Yomi shiur, produces inspirational videos for Aish.com, and gives lectures to audiences worldwide. Moe lives in Israel with his wife and children. (Learn more at www.MoeMernick.com)

Inspiring Insights to Share at Your Passover Seder
Why Are The Prayers Of Yom Kipur So Repetetive?
Ha'azinu 5783: A Time for Unity!
Twisted Thinking
Comments