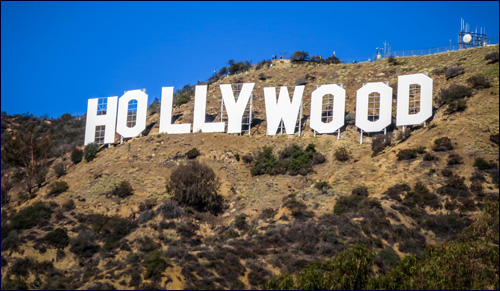 My struggles in Hollywood feel like my own personal wandering through the desert.

I’ve been wandering the California desert for 33 years in pursuit of the gods of show business.

Forty years in the desert – until nearly an entire generation came and went! I can’t believe it. I can’t believe that come this July, I will have been wandering the Southern California desert for 33 years, in dogged pursuit of the gods of show business, as multiple generations have come and gone. (Just because I’ve had the patience to wander that long doesn’t mean I had the patience to wait another seven years to write this.)

How goes the climb up that mountaintop? Next to cutting through the red tape of Hollywood, cutting through the Red Sea is an unleavened cakewalk. Still, the trudge through the desert hasn’t been all mirages. I’ve earned over a dozen credits, wrote for iconic shows. I won a CableAce Award. Unlike the calf, it wasn’t golden, but I worshipped it just the same. Till the show biz gods later killed the CableAces. Was there a message there?

I’ve let my people go. My agents. My managers. I think a few of them let me go. They didn’t return my calls before freeing me either, so who can tell? The question I continue to ask during my slowing slog through the sands of time: Why is this night different from all other nights? Will it be the night my latest people return my calls during their long commute home? (Their bumper stickers read, “How am I multi-tasking?”) Or will it be the night God finally beckons, “Pencils down!” and I discover firsthand that life is indeed a test.

Have I learned enough to pass that test? Over a third of a century, one would hope. (It’s nice to channel the positive connotation of “pass,” versus the show biz gods’ “Loved the script, but it’s a pass” pass.)

After all of this wandering, I feel obliged, dear readers, to relay the true test of what I’ve learned, “the commandments” that have been handed down to me. Think of them as Wikimandments. Constantly evolving, open to further editing by the likes of you. After all, life – like show business – is about collaboration. Still, my tombstone will read: “To be rewritten over my dead body.”

Welcome to Wikimandments,
the free Commandments that anyone can edit.

1) Thou shalt not covet thy neighbor’s connection to Steven Spielberg's second cousin twice removed. [edit]
2) Thou shalt not make for thyself an idol, unless it’s Kelly, Reuben, Fantasia, Carrie. [edit]
3) Honor thy father and mother, especially if you’re Suri Cruise. [edit]
4) You shall not make wrongful use of the name of your Two and a Half Men Creator. [edit]
5) For six days you shall labor and do all your work, or have lackeys do it for you. [edit]
6) You shall not kill, but it’s okay to pretend to kill on Boardwalk Empire. [edit]
7) You shall not steal, unless it’s ten years off your age. [edit]
8) Remember the Black Sabbath. [edit]
9) You shall have no other gods before Justin Bieber. [edit]
10) Thou shall not cram in something lame just to fill up the last slot of a top ten list. [edit]

Why More Arab Countries Should Make Peace with Israel

Passover in the South of France: My Behind-the-Scenes Report

Top Sukkot Decorations
Vayelech 5783: Regret and Repent
Rabbi Sacks: Focus On the Important, Not the Urgent
Put Your Foot Down: Are Human Feet Poorly Designed?
Comments
MOST POPULAR IN Jewlarious
Our privacy policy
Aish.com Is Looking for Great Writers