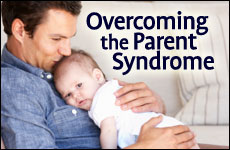 I did not naturally love my baby son. Was something wrong with me?

“Suddenly my heart was overflowing with love for my new baby,” glowed my friend, a new father.

I crumpled my brow. I didn’t feel that way when my son was born. Sure, I was proud. I was fascinated by the little being who suddenly landed in my life as if from another world. But my heart wasn’t brimming with love.

Maybe there’s something wrong with me, I wondered.

Six months passed. The little guy was cute. I hugged him a lot, but he didn’t do much. It was hard to relate to him. I confided my feelings to a friend.

“Yeah, for the first six months, babies are a bit like tadpoles,” he said. “You don’t really know what to do with them. It’s hard to feel emotionally bonded. But don’t worry. Things will change once they start moving around and developing personality.”

My son’s moving around didn’t help me feel love. If anything, my emotional block worsened. Everything became a target for him to be toppled over or torn apart. Every time I had to clean up his mess, I felt my emotional iron curtain thicken. What made it worse was a sense that my heart was unable to share and experience love, a love as natural as that of father to son.

Then some friends came over for dinner, new infant in tow. I offered to hold their little babe.

An amazing thing happened. I felt like a new father. I patted him as he cried, and he calmed. What a cute kid, I thought to myself. The baby was beaming and purring in my arms. It felt so natural. My heart was flowing with feelings of affection.

What’s the matter with me? I pondered, confused. Why don’t I feel this way toward my own son?

Then the answer hit me. This kid is not mine. I’m not responsible for him. “No obligations” means “no stress." I can just focus on his sweet little soul and feel love.

Related Article: 9 Lessons My Baby Taught Me about God

This must be what grandparents feel like as they lovingly watch their grandkids wreak havoc on someone else’s house, I concluded. And I am afflicted with “parent syndrome.”

“Parent syndrome,” as clinically defined (by me) is “an overabundance of anxiety at one’s own feelings of inadequacy that bar one from being able to feel and express love.”

I was in a quandary. I didn’t know if I should be more bothered by my loveless heart, or by the prospect of raising a child who would grow up with a grudge against his loveless, anxiety-ridden father. I decided the latter was scarier. It wouldn't affect only me, but also my child and my wife. I needed to find a cure for the “parent syndrome."

In a flash of revelation, the answer dropped into my head. I had to learn to be a “grandfather.” Why wait another 30 years to appreciate my own descendants. If I could figure out how to act like a grandfather, I could enjoy my own child right now.

So without further ado, here is my “Grandparent List" – seven observations of how to use grandparenting techniques to be a better parent.

(1) Grandparents schedule time to spend with their grandkids.

As busy as life gets, how could I use the time with my kids more efficiently? I looked for misused moments. For example, rather than rushing to get to work while dragging my son screaming to school behind me, I decided to wake up 10 minutes earlier. Now we can leave without stress and I can actually focus on my son, telling him a story as we walk to kindergarten.

(2) Grandparents do not pressure their grandchildren to perform.

When my son was born we bought a lot of “skill-building” story books. I used to get stressed out when he was unable to perform the “age two” skills even at age two-and-a-half. Now I let him turn the pages and point out whatever he wants. When I actually do teach him something, he is much more receptive. He probably feels it’s coming from my happiness of discovering with him, and not my need to see him perform. I let his curiosity take the lead, and it leaves him feeling appreciated and valued.

I somehow associated kids having enjoyment with kids being “spoiled." Anytime I’d give my son a treat, I’d make him do something for it. But now I choose times to “do pure good” for my son with out any agenda. I try to quell the worried voice and take pleasure in his pleasure.

(4) Grandparents don’t try to get a dozen other things accomplished while with their children in order to feel accomplished.

I like to feel productive. Anything else I do feels more “productive” than spending time with my son. But in truth, there is nothing more productive than building a human being with care and love. I now dedicate times where I don’t allow myself to do anything else - no computer, no phone – just focused attention on my son.

(5) Grandparents share from their own lives in order to convey values.

As a Jewish parent, there are values I want to give over. At first I tried to impose the values as rules, and got upset when my son wasn’t listening. Then I tried disguising them as stories – and still got annoyed when he wasn’t listening. Nowadays, I haven’t discarded the rules, but I do look for opportunities when I have to tap into a certain trait, and make sure to I include my son in what I’m going through. For example, returning a lost object to its owner becomes a process I share and discuss with my son. The value becomes much more real for him than if I simply told him a dry set of rules.

(6) Grandparents focus on the good – even when their grandchild is acting like a “little monster."

I used to be over-focused on what my son was doing wrong, because I was worried I’d look like a bad parent. Now I take mental snapshots of good character traits I see in my son. I try to hold onto them when he is misbehaving. For example, the teacher recently called and said that my son was beating up boys who picked on smaller boys. I was able to focus on my son’s good heart that felt the pain of others, while helping him understand that hitting is an inappropriate response. Every day I try to review my mental snapshots of his good nature. It gives me clarity when he is misbehaving.

I frequently found myself saying “yeah” and “wow” to my son in a very fake voice. He’d show me a drawing he’d made. “Wow!” Kids sense when we are fake. So now when he shares with me something, I take a real look at it and say in a normal voice: “You used green? What’s this big brown spot?” He feels that I am really with him. And for my son, that’s a big “wow.”

So where do things stand with my now-five-year-old son? I can’t say that I’m overflowing with love, but my heart is a lot more open, and my pulse is much calmer. And I know that the more I act in a way that shows my love, the more my natural love will emerge.