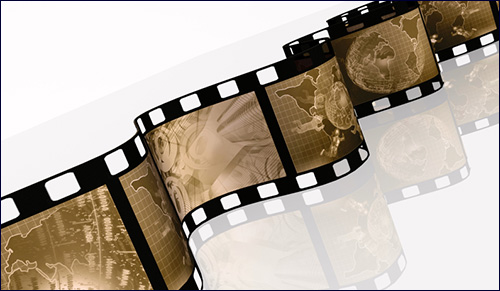 You certainly can't include the entire range of Jewish history in just one 5-hour retrospective. So, naturally, in Simon Schama's recent PBS 5-hour, 5-part "The Story of the Jews," some things had to be cut. Here are some of the perhaps less-important segments of Jewish history that failed to make it on the air for this series. Should they have been included? You be the judge.

Among the most fascinating of prehistoric creatures were the Jewish dinosaurs, a segment bafflingly left out of not only this TV series, but also most school textbooks. Let’s remedy that now with a quick overview of one of the more remarkable of the species – the Menschasaurus. Measuring an average of 13 feet high, 20 feet long and weighing 3,000 pounds, the Menschasaurus, despite its awesome size, placed a high value on education – both teaching and learning. As for diet, he spent his days searching for leaves, roots, berries and fish, which he would invariably form into a crude blintz. There is evidence that the adolescent Menschasaurus experienced a very basic bar mitzvah – and then was encouraged to pursue a career in medicine or law. These Jewish dinosaurs did experience discrimination, though they chalked it up to the envy of the other species. In fact, some historians theorize that Moses’ “Let my people go” was derived from the Menschasaurus’ “Let my people growl.”

In tracking the evolution of modern Jewish comedy, it is often traced all the way back to early vaudeville days. Yet its origins actually go back much farther – to the Jewish medieval court jesters – or “Jewsters,” as they were then known. The Jewsters’ job was entertaining the king. Talk about effective motivation to perform well – if the king didn’t die laughing, the Jewster would be put to death. One of the best known of the Jewsters, Shecky Laughalot, would open with his famed matzoh juggling routine. He’d then do a monologue consisting of jokes such as, “"Of all the knights at King Arthur's Round Table, the largest was Sir Cumference. He got that way from too much pi."

If the king wasn’t cracking a smile, the Jewster would immediately switch to his “A” material:

“Question: When a knight in armor was killed in battle, what sign did they put on his grave?
Answer: Rust in peace!”

The rich American heritage of Jewish cowboys throughout the Old West is a topic seldom covered in journalism, literature, TV or film, so it’s at least consistent that it would have been cut from the show. And yet there were many decades where you couldn’t go for a ride on the prairie without hearing the plaintive Jewish cowboy exclamation, “Yippee-Yi-Oh-Chai-Yay!” Cattle preferred being under the care of the Jewish cowboy, who treated them more humanely. Easily recognized by their six-gallon yarmulkes, tzitzit protruding from beneath their leather vests, and Stars of David carved into their saddles, Jewish cowboys would frequently ride into town, belly up to the local bar, order a whiskey and seltzer, and entertain the locals with Jewish versions of popular cowboy songs, such as, “Ghost Shleppers in the Sky,” “Mamas, Don’t Let Your Babies Grow Up to be Rabbis,” and “The Man Who Shot Yitzchak Valanceberger.” After a long day on the trail, the Jewish Cowboys were fond of sitting around the fire, with heaping plates of matzoh brei, reminiscing over humorous stories of their bar mitzvah party receptions.

Albert Einstein was so incredibly successful as a physicist that it seem incongruous to hear about any failure on his part. Perhaps that’s why the segment on Einstein’s prom experience was cut from the show. The sequence highlights the seventeen girls who turned Einstein’s prom invitation down, and the eighteenth, Marta Chaya Coopershmit who finally said yes. Apparently the young Ms. Coopershmit was convinced by Einstein’s romanticism and his promise to name a certain theory of his for the two of them. On a nearby tree he carved, Einstein = Marta Chaya Coopershmit, or for short, E=MC2.

On May 14th, 1948, David Ben-Gurion, the Executive Head of the World Zionist Organization and president of the Jewish Agency for Palestine, declared "the establishment of a Jewish state in Eretz Israel, to be known as the State of Israel." On May 15th, a meeting was called to brainstorm a slogan to best represent the new country. We all now know that the chosen slogan was “The Land of Milk and Honey.” But rare existing footage of the brainstorming session reveals the additional slogans which were proposed and rejected. They included: “Let My People Stay,” “The Land of Kugel and Blintzes,” and “It’s Our Country – What Jew Gonna Do About It?” There were supposedly many more slogans proposed, but so much time was spent arguing over what to order in for lunch, that the camera ran out of film in the middle of a bitter discussion over the merits of Chinese versus Mexican take-out.

86 year old Benny Rosenblatt is alive and well, living today in Bismarck, North Dakota, which is unusual enough in itself for a Jew. But beyond that, Rosenblatt is one of the few, if not only, Jews, according to the Guinness World Book of Records, who has never tasted a bagel, and has no intention of ever doing so. “I don’t like the look of them,” explains Rosenblatt. “I prefer my sandwich breads to be square or rectangular. Bread shouldn’t be round. Never had an English muffin either.” Rosenblatt’s wife Esther assures, “He’s normal in every other way, though.” His profile was cut from “The Story of the Jews”, but included in the DVD extras.

Puttin' on the Shmutz