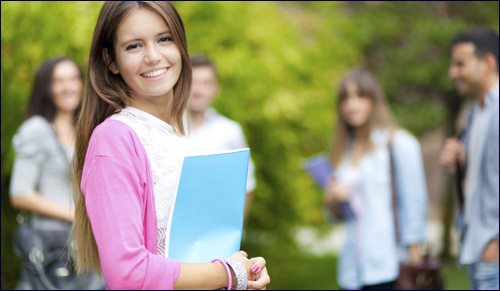 From an Orthodox all-girls high school to a secular British University. In two words: culture shock.

When I first started attending university after having spent my teenage years at an all-girls, orthodox Beth Jacob high school, I was in for a massive culture shock. Nothing scary, don’t worry; it’s just that I think I was the first Jew to set foot in the quaint Yorkshire village where I studied since, oh, 1922? Although no one actually asked me, I did get many suspicious glances in the direction of my curly black hair (perfect for concealing horns...). Only once, though, did someone have the courage to actually sneak up on me and run her fingers quickly across my scalp, saying nervously – ‘just checking, just checking!’

“I baked your Jewish ‘challah’ so we could break bread together”!

Being approached by the Christian chaplain one day still came as a surprise. She approached me crooning that she had ‘just the thing’ for me, and then generously presented me with an enormous shopping bag on which the words ‘SCHLEP THIS’ were emblazoned. I graciously accepted her gift – apparently left at the university by the last Chabad emissary to pass through the town. To be fair, the bag makes a great conversation piece (‘did you buy that thing?’).

Meanwhile, a member of the university staff who was always particularly kind to me once baked a challah in order that she and I could ‘break bread’ together. ‘I made your traditional bread so I knew it would be kosher!’ she beamed. ‘Um, actually...’ I stammered, eyeing the not-so-kosher challah warily. When she saw my reluctance to eat the challah, the lady turned it over, revealing a large red cross on a dry cracker that was stuck to the base of the challah. ‘But I had some monks especially bless some communion wafer for you, and I baked it into the bread, especially for you, to bring you blessing!’

I really was lost for words at this point, eventually gifting the seriously-not-kosher challah to my non-Jewish colleagues in class. ‘Do all Jewish breads have crosses on them?’ one girl asked, surprised.

I was looking to get married at this point – or as we call it in my community, “in shidduchim” – and I was keeping in mind everyone’s advice about trying to remain open minded. However, when one of my classmates bounded into class excitedly one day, leaning forward to whisper in my ear; ‘Esther, I know a Jew and I think you should date him,’ I had my reservations.

‘Just like that?’ I asked, stalling. ‘I don’t know anything about him!’

‘So what do you want to know?’ the lady asked.

‘Oh, don’t worry about that, so is he,’ the lady reassured me.

‘Are you sure...?’ I hesitated, thinking that the conversation was getting so weird.

What can I tell you? Nothing came of that shidduch. Who’d have though it, eh?

When I did actually get engaged, I was right in the middle of my degree and had just turned twenty. When they discovered that I was getting married, everyone at university was in shock. ‘What? You’re getting married? Like, for life? Why? How long have you known him? Did your parents just come up to you and say: yo, here’s some random dude and a ring?’

Suffice it to say, shidduch-dating was very hard to explain. On the other hand, this conversation which I once overheard among a few older students sounded strange to me:

Lady 1: ‘I mean, Bill and I, we had the dog, we had the cat, we got the house – and after the boy came along, well, the next thing was to get married?’

Lady 2 (nods wisely): ‘Well recently, Bob and I are sitting in a restaurant, and I propose to him. First thing he does is laugh, then he yells for the waiter and says: you won’t believe this, she’s just proposed to me!’ and so I’m hiding my face behind one of those massive wineglasses, I’m that embarrassed! Anyhow, he accepts and I say, now keep your socks on, we’re not getting married for at least four years – when I’ve finished my studies – I’ve got my priorities right , y’know!’

(The two women cluck in sympathy with each other.)

At the end of the day, all I can do is try to be polite and try to act normal ( – well, apart from regular afternoon disappearances for Mincha, not shaking hands with males and leaving early on Fridays). Despite my best efforts, I find that people still peer at the hat I cover my hair with since I got married. I watch a glimmer of understanding spark in their eyes as they discern ‘ah, this must be her way of concealing those famous Jewish horns...’

Crash Course in Texting for Parents
Don’t Believe in Other Gods Versus God is One
Seeing Without Eyes
Why Shouldn’t We Eat Whatever We Want?
Comments
MOST POPULAR IN Jewlarious
Our privacy policy
Aish.com Is Looking for Great Writers