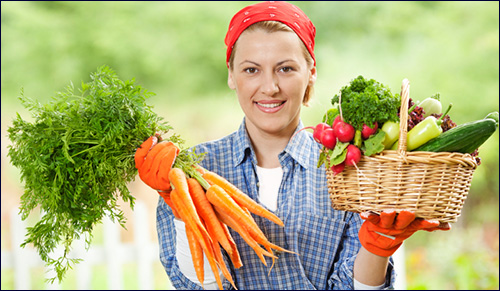 Success and failure in my back yard organic garden.

Standing at my kitchen sink, I look at the clock and realize I have slavishly devoted an hour and a half to cleaning ten heads of lettuce that grew in my tiny organic garden. After all my effort, I am bugged to discover a few white bugs that almost look like little white flowers. How dare they try to trick me like that! Bugs are in no way kosher, so I had to scrupulously keep checking my home-grown produce to ensure I wouldn’t serve or swallow a little creepy crawly thing. I also spy a caterpillar, slyly camouflaged in the exact pale green as the leaves. Man, I bet it’s easier to de-bug the Kremlin than a head of organic green leaf lettuce. Beginning one last rinse, this time with an extra drop of vinegar, I think, Maybe pesticides aren’t so bad after all.

If pesticides were so bad, could someone explain why were we all living longer?

For years I easily resisted the hoopla over organic produce. If pesticides were so bad, could someone explain why were we all living longer? Organics are also pricey, suited to the Lexus crowd, but we are on a Honda budget. I began to reconsider a few years ago when one of my closest friends went on a strictly organic, vegan diet as part of her treatment for cancer, and I wanted to cook for her and her husband. After three months, she was certain her diet was helping her gain strength while vanquishing the cancer, one cell at a time.

I nearly fainted when surrendering my credit card to pay for my organic shopping spree. For that amount of money I could have sponsored the Kiddush at shul. And all I bought were some vegetables, fruits, rice, spices and cooking oils! I’d have had to have won the lottery to afford the organic kosher chicken! On the other hand, I had to admit that the meal I made was tastier than usual. Even my husband, who had not seen the Whole Foods receipt, agreed. I continued to buy organic to cook for my friend. Sheepishly, I also began to buy for my family when prices didn’t induce sticker shock.

Had I become brainwashed under the avalanche of “organic, organic, organic” marketing messages, with photos of organically fed families promising an irresistible apple-cheeked wholesomeness? Yeah, probably. And maybe I read one too many articles sowing fear about the so-called “dirty dozen,” a list of produce said to harbor the most pesticide residue. The list includes many family favorites: sweet peppers, broccoli, apples, cucumbers, and strawberries.

Whatever the tipping point, last year I decided to pull out a row of useless rosemary bushes to start an urban organic garden of my own. My greatest botanical achievement has been learning not to kill an orchid after only two weeks, so I hired a professional for the job, and bought a pair of gardening gloves, giving me the conceit I was a faux farmer. I tried to persuade myself that this connected me more closely to my Jewish ancestors: In the desert we weren’t all accountants, dentists and therapists. We were an agricultural people! I could be a little agricultural, too, if I wanted to. But if I thought buying all organic produce was expensive, it was chump change compared to funding an organic garden, even one as miniscule as mine: less than two feet deep and fifteen feet long. Seeds are inexpensive, but new soil, mulch, fencing, labor and the drip irrigation system add up fast.

I was excited just reading the little tags jutting out from the fresh soil, identifying where snap beans, zucchini, lettuces, tomatoes and peppers would sprout. I waited for the magic to happen. But for every promising new shoot, I also saw trouble: Was that mold assaulting the leaves of my zucchini plant? How dare bugs nip at my neo-natal peppers? I tried to coax the defiant snap beans to grow with encouraging words, but, seemingly against their will, they yielded a miserly sixteen beans. I chose not to try to amortize the price of each bean.

My gardener returned to deal with the bugs and mold, but he explained that yields were always unpredictable. “What did you expect in such a small space?” he asked. I watched my garden with equal measures of concern and anticipation, a worried Jewish mother. I bent low to the ground and pulled weeds, channeling my ancestors in ancient Israel. Five weeks later I had bright, fresh butter and red leaf lettuces. A few weeks after that, I snipped kale with a sharp gardening tool whose name I do not know and twisted off scrumptious orange and red grape tomatoes from the vines. I served the scanty yet tasty bounty at dinner with pride. One night, we had as many as three grape tomatoes each.

My escapades in organic garden have been expensive, and I think I am going to give it up. I only have so many hours in a day to pull out the Chinese garlic, which I didn’t plant but is somehow taking over the entire area. Why are even my weeds made in China? I don’t get it. I admit I felt great satisfaction in gifting my lettuces to friends and neighbors, ensuring them that they were kosher-certified from my laborious bug-checking. But I don’t care to become a mulch maven. Let someone else worry about the ideal nitrogen levels required for soil to yield broccoli (a lot) versus blueberries (a little). I’ve got other things to worry about.

I appreciate the Almighty even more now, having seen how much attention to detail, patience and hard work goes into the process of growing our food. No wonder we say a bracha both before and after we eat! He provided amazing variety in the universe of food for us to enjoy. And thankfully, He also made enough people willing to work hard to plant and harvest it, so I don’t have to!