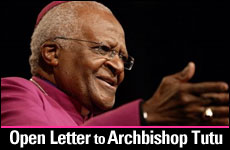 The Arab/Israeli conflict is not a struggle against apartheid or occupation.

I write to you with a heavy heart.

You are a revered leader in South Africa, but recently have added your iconic voice to the campaign for sanctions against Israel.

Archbishop, I believe you are making a terrible mistake. Without truth there can be no justice, and without justice there can be no peace. The Talmud says: “The world stands on three things: justice, truth and peace.” These three values are inseparable. Archbishop, I am convinced that the sanctions campaign against Israel is morally repugnant because it is based on horrific and grotesquely false accusations against the Jewish people.

The truth, archbishop, is that Israel is simply not an apartheid state. In the State of Israel all citizens – Jew and Arab – are equal before the law. Israel has no Population Registration Act, no Group Areas Act, no Mixed Marriages and Immorality Act, no Separate Representation of Voters Act, no Separate Amenities Act, no pass laws or any of the myriad apartheid laws.

Israel is a vibrant liberal democracy with a free press and independent judiciary, and accords full political, religious and other human rights to all its people, including its more than 1 million Arab citizens, many of whom hold positions of authority including that of cabinet minister, member of parliament and judge at every level, including that of the Supreme Court. All citizens vote on the same roll in regular, multiparty elections; there are Arab parties and Arab members of other parties in Israel’s parliament. Arabs and Jews share all public facilities, including hospitals and malls, buses, cinemas and parks. And, archbishop, that includes universities and opera houses.

Related Article: What Really Happened in the Middle East

The other untruth is the accusation of illegal occupation of Arab land. Like the apartheid libel, this is outrageously false. There is no nation that has a longer, deeper or more profound connection to its country than the Jewish people have to the land of Israel and the city of Jerusalem.

Archbishop, you and I as religious leaders always turn to the Bible as a source of truth. What does it mean that Israel is the “promised land”? It means, as we both know, that it was promised by God to the Jews – the descendants of Abraham, Isaac and Jacob. This promise was first fulfilled by God more than 3,300 years ago, when Joshua led the Jewish people into the land of Israel. Since then there has been an unbroken Jewish presence in the land, albeit small during the Roman exile.

Three thousand years ago, there was no London or Paris, no Washington or Moscow, but there was a Jerusalem, capital of a Jewish state.

All the books of the Old Testament – Joshua, Judges, Samuel, Kings, Isaiah, Jeremiah, etc. – describe the deep connection between the Jews and the land of Israel, including the West Bank, known in the Bible as Judea and Samaria – the area that contained the great cities of the two previous Jewish commonwealths, such as Jericho, Shiloh (where the Tabernacle stood for hundreds of years), Beit El (where Jacob had his vision of the ladder) and Hebron (where Abraham, Isaac and Jacob are buried with their wives Sarah, Rebecca and Leah).

Three thousand years ago, there was no London or Paris, no Washington or Moscow, no Pretoria or Cape Town, but there was a Jerusalem, capital of a Jewish state.

“If I forget thee O Jerusalem, let my right hand forget its cunning... if I fail to elevate Jerusalem above my foremost joy.” Those words from Psalms are recited by Jews at every wedding. At every funeral, the statement of comfort given to the mourners refers to Zion and Jerusalem. Jews pray for Jerusalem three times a day, and also after every meal.

Archbishop, the Arab/Israeli conflict is not a struggle against apartheid or occupation. It is a century- long war against the very existence of Jews and a Jewish state in the Middle East. There have already been seven major Arab/Israeli wars since the birth of modern Israel.

Today the front includes an alliance between Iran, Syria and Hizbullah, the latter now with 40,000 rockets aimed at Israeli cities. Iranian officers train Hizbullah forces, while Iran pursues nuclear weapons and openly declares its intention to wipe out Israel. Hamas, the terrorist Palestinian government in Gaza, sides with Iran and Hizbullah in rearming with the declared aim of destroying Israel.

Since 1967, one aspect of this century- long conflict has been the demand for a Palestinian state. In spite of the deep historical and religious roots of Jews in all of Israel, generations of Jewish leaders have been prepared, for the sake of peace, to give up ancestral and covenantal land to establish a Palestinian state.

So why has there not been peace? The ANC taught us you can’t make peace on your own. No matter how deeply the ANC was committed to a peaceful resolution of the South African conflict, until the National Party was prepared to accept that black South Africans had a place in their own country, there could be no peace. And so too, until the Arab/Muslim world accepts that Jews have a right to a state of their own on their ancestral land, there will be no peace.

In 1948, the Jews accepted the UN resolution establishing a Jewish state and a Palestinian state, but the Arab world rejected it and five Arab countries invaded Israel to destroy it.

After that, the West Bank and Gaza were in Arab hands until 1967.

There was an opportunity then – every day for almost 20 years – to establish a Palestinian state. It never happened. And since then there have been numerous opportunities – each rejected by Arab leaders.

Why? Because this war has been more about the destruction of the Jewish state than about the establishment of a Palestinian state. Even today, so-called moderate Palestinian leader Mahmoud Abbas denies Israel’s right to exist as a Jewish state.

In 2000, the Palestinian leadership launched a massive wave of suicide bombers into Israel, leading to more than 1,300 civilian deaths and 10,000 injuries. Proportionately, such carnage in South Africa would mean more than 10,000 killed and over 80,000 injured! Israel erected a security fence with checkpoints to shield it from such attacks launched from the disputed territories.

Archbishop, you compare these checkpoints to apartheid South Africa. But they are not about pass laws, which don’t exist in Israel. The checkpoints are on the border between sovereign Israeli territory and the disputed territories of the West Bank and Gaza in order to keep civilians from being murdered, and have been very successful in doing so. These checkpoints – like those found in all airports – are there to prevent suicide bombers from blowing up innocent people.

Archbishop, do not bestow respectability on an immoral sanctions campaign that is an affront to truth and justice, which prevents peace and prolongs the terrible suffering of people on both sides of this painful conflict. Archbishop, let us pray for an end to all this agony, and for the fulfillment of the verse in Isaiah: “And the Lord God will wipe away the tears from all faces.”

The writer is chief rabbi of South Africa.

UN's Theatre of the Absurd

Ariel Sharon's Speech at the UN

The Fog of War
The Blue Beyond
Great Place to Live
Is Eating Supposed To Be Spiritual?
Comments
MOST POPULAR IN Israel
Our privacy policy