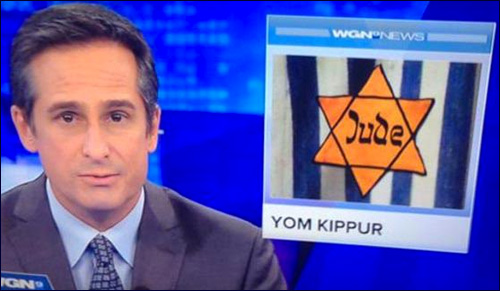 A recent spate of offensive statements and images are being excused as shockingly dumb errors.

It was a mistake, an oversight. So sorry! Lately, a number of institutions and companies have found themselves saying "Oops!" after making anti-Jewish or anti-Israel slips. While it's welcome when organizations admit errors, anti-Jewish statements and images can have lasting effects – and raise questions about how they happened in the first place.

Here are some recent examples of supposedly smart organizations that made surprisingly dumb mistakes where Jews and Israel are concerned, and the concerned citizens who called out their mistakes and demanded accountability.

WGN-TV News in Chicago called it an "oversight" when the image accompanying a September 28 story about Yom Kippur on the evening news showed what someone at the station apparently considered a standard stock Jewish symbol, suitable for airing on the evening news: a yellow Nazi star with the word "Jude" on it sewn onto a concentration camp prison uniform. 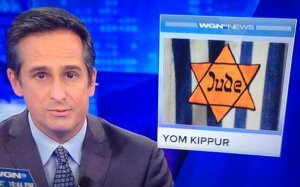 While thousands of people watching absorbed the message that an offensive Holocaust-era symbol represents Jews today, some alert viewers took the time to notify the station that the illustration was offensive – and ask how such an outrageous visual could have been aired. WGN apologized, assuring viewers they are "reviewing (their) in-house policies" to ensure a similar error never happens again. Left unexplained was how a news worker could have ever made such an outrageous "mistake" in the first place.

Just a few weeks earlier, London's Imperial War Museum explained it was an "accident" when their website mislabeled Jewish veterans of World War II “terrorists". An online photo of members of the Jewish Brigade – a British army division made up of Jews from modern-day Israel who fought Nazi forces with distinction in Italy in 1944 – was accompanied by the caption "Terrorist activities: Men of the First Battalion Jewish Brigade during a march past". A further description mischaracterized Israel's army as illegal, pointing out many of the soldiers "went on to join the Haganah and other illegal formations". (The Haganah was the nascent defense force of the Jewish State and went on to become the Israeli Defense Forces.)

It was only after the Simon Wiesenthal Center wrote to the museum, pointing out that far from being "terrorists", Jews who fought Nazis as part of the British Army were in fact heroes that the museum apologized and promised to "review" procedures to make sure such a "mistake" doesn't happen again. 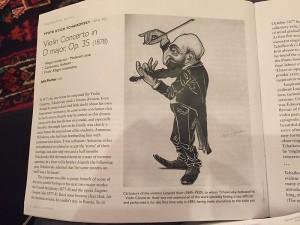 British Jews called out the BBC in September, 2015, after it bizarrely chose to illustrate its official Proms Concert Program with a crude, Nazi-like caricature of the 19th Century Jewish violinist Leopold Auer, featuring an enlarged head and grotesquely hooked nose. "It is an anti-Semitic cartoon and it is completely out of context" Nigel Goldberg, a violin teacher one complainants who contacted the BBC, explained, "Anyone I've shown it to, Jewish or not, has been stunned". The BBC apologized, claiming it never meant to offend with the anti-Semetic image, but left unanswered the question of how anyone could possibly have approved such an outrageous image for publication.

With programs for the prestigious concert series already distributed, the damage had already been done, with thousands viewing the program and its anti-Jewish imagery – absorbing the implicit message that the picture was acceptable. 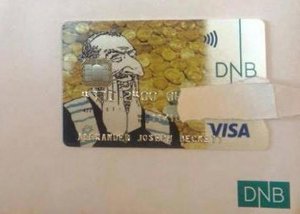 That same month, DNB, Norway's largest financial services company, issued a personalized credit card decorated with a Nazi-like cartoon of a hook-nosed Jews laughing in front of piles of gold coins. Only after the Israel-based Hallelu Foundation, which combats negative depictions of Jews and the Jewish state, queried how such a shockingly offensive card could ever be issued, DNB blandly blamed a "failure" of its internal "controls" and issued an apology. No mention was made of how such an inappropriate image could ever have been included in its collection of stock credit card templates in the first place.

Terrible mistakes do happen, but sometimes there is a simpler explanation behind the anti-Jewish sentiment: blatant anti-Semitism.

Light in All the Dark Places