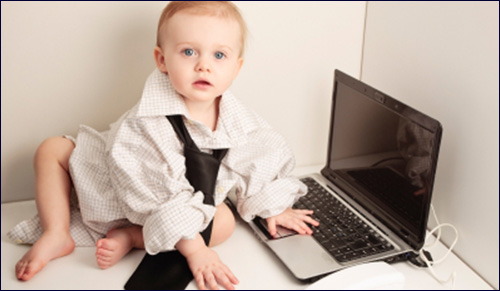 Having a 15-month-old baby in your house that can walk but not talk is kind of like having a really short, slightly-insane foreigner living with you.

One of the most annoying things about being a parent is the undeniable urge to teach your children to do things that will invariably make your life more difficult. You teach them to crawl, to walk, to talk, and to drive, and it’s all for their own good, but no parent goes, “Whoo hoo! My son finally knows how to drive! Now I can rest easy.”

Why do parents have the urge to teach our children things that will make our lives more difficult?

That’s what’s currently happening with our youngest son, Gedalyah. Gedalyah, who is fifteen months old, has just learned to walk, and he does so in that stumble that babies do that look like they had a little too much to drink. Now obviously, it’s great that he’s walking. My oldest daughter didn’t learn to walk until well after her brother was born. And she weighed twenty-five pounds. So whenever my wife wanted to leave our basement apartment when I wasn’t around, she would have to pick up both children, as well as any packages or baby supplies she would need, trudge up the stairs (which were outside the building), walk to wherever we parked the car, and figure out how to unlock the door with a baby under each arm.

But now that he’s mobile, Gedalyah is everywhere. For example, he likes to crawl under my desk while I’m working, usually to follow a dropped toy, and then, once he’s down three, he will decide to turn off the power strip. That the entire computer is plugged into. So I’m working, not bothering to save anything – I’m going to keep hitting save every ten seconds just in case? – and suddenly, everything goes black. I don’t know why they design those strips so that the “off” button glows when it’s on. That’s just a magnet for baby fingers.

One of the main incentives that got Gedalyah to start walking, I think, was the realization that he would finally be able to carry things. It used to be that if we gave him a lollypop, he’d crawl around with it and rub it on the floor, and it would get covered in dirt and occasionally a four-foot strand of hair, and he’s still be happily eating it. So now, when we give him a lolly, he licks it and walks around with it, and we cringe every time he comes near the sofa.

He has also discovered that he can carry things that are like five times his size. He comes over to me carrying an enormous plastic stepstool, puts it down right next to my desk and stands on it, staring at my monitor and watching letters magically appear on the screen.

Yes, that’s how my columns get written. The letters magically appear on the screen. I definitely have nothing to do with it, because I’m spending the whole time trying to get him to leave. And it doesn’t help that every time he gets on and off the stepstool he manages to hit the caPS LOCK BUTTON WITH His elbow. Sometimes he also tries to help me type. I guess he figures there’s a lot of buttons, and he should at least help me press some of them. He also spends a lot of time touching all of the stuff on my desk, such as my pad, my lunch, my paper clips, and my folders. Like he’s playing “Duck duck goose”.

“Hey! Why is everything sticky?”

Another thing that he does, when he comes over to me while I’m working, is give me things to hold. That’s his main hobby, these days. He will not be happy until he has handed me everything in the entire house. I take what he gives me because I know that if I ignore him, he lets go anyway, and the item rolls under my desk. And the last thing I want is for him to go looking under my desk. And I can only put him in for so many naps.

So for example, right now, as I type this, I am holding a sippy cup, two cars, three Fisher Price Little People, a set of fake keys, a children’s snow shovel, and a pair of shoes that are neither his nor mine. (No, I don’t know how I’m typing this either.)

“Here,” he seems to be saying. “You hold my toys, and I’ll sit here and push all these buttons.”

It turns out that having a 15-month-old baby in your house that can walk but not talk is kind of like having a really short, slightly-insane foreigner living with you, who spends his days poking your food with his finger and handing you things. And he’s one of those foreigners that doesn’t seem to be aware that you’re not speaking the same language that he is. (I get phone calls from these people all the time. I pick up and say, “Hello?” and they go off into a whole long rant in some other language, and I’ll say, “I’m sorry sir, you’ve got the wrong number,” like it’s my fault that he can’t dial a phone. And then he goes on in his other language, like the fact that I told him it was a wrong number in English wasn’t at least a clue that I don’t really know Spanish. And I’ll say, “Look, sir, I don’t speak Spanish. Even if you got the right number, there’s no way we can have a conversation like this. Why is the phone sticky?”)

And it’s the same with the little guy living in your house. You’re like, “Sir, go play with your toys. I don’t need you making tiny finger holes in my sandwich.” And he’ll say, “Gah! Oogah! Mah!” Like he thinks you’re going to say, “Well, in that case, keep making holes.”

I suspect that he does understand a lot of what I say, but based on our recent conversations, I’m not sure that he fully understands the word, “No”. I think the next thing we should concentrate on with him should be that word: “No”. It’s not one of those things we’ll regret teaching him, is it?

The Ten Commandments of Jewish Worry: Part 2
In the Shadow of David and Goliath
Where Do the Laws of Nature Come From?
Saadiah Gaon, Rashi and Maimonides: How Three Rabbis Revolutionized Judaism
Comments