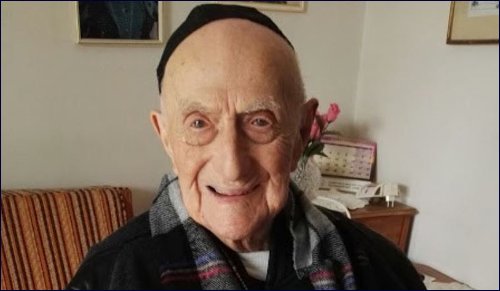 Most boys celebrate their bar mitzvah when they turn 13. Yisrael Kristal, the world’s oldest man, plans to celebrate the day he became a bar mitzvah a century late, when he turns 113. Over a hundred friends and relatives plan to visit him at his home in Haifa and celebrate with him.

Born on September 15, 1903, in the town of Zarnow, Poland, Yisrael grew up in a religious family. His father was a Torah scholar, and Yisrael attended Jewish school as a child. “He’s happy” is how Yisrael’s daughter, Shulamit Kuperstoch of Haifa described her father. (Click here to read Aish.com’s interview.) “This is the most important thing to be in every situation.” Throughout his long life, Yisrael’s overriding faith and trust have sustained him, even in the most terrible times. 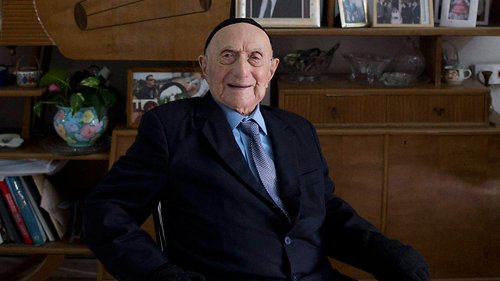 Yisrael’s idyllic childhood was interrupted by the outbreak of World War I, when he was eleven years old. Yisrael’s father was drafted into the Russian army to fight, and died soon after. Yisrael’s mother had passed away when Yisrael was eight and Yisrael was raised by his uncle.

In 1920, Yisrael moved to the town of Lodz to work in his family’s candy business, and in 1928 he married a Chaja Feige Frucht. The couple had two children.

Their lives were upended by the outbreak of World War II. The Kirstals were forced to live in Lodz’s infamous overcrowded, unsanitary Jewish ghetto. There, both their children perished. In 1944, Yisrael and Chaja were deported to Auschwitz, where Chaja was murdered. Liberated the following year, Yisrael weighed only 81 pounds.

Somehow he found the strength to rebuild. “I believe that everything is determined from Above and we shall never know the reasons why,” he told reporters soon after being named the world’s oldest man in 2015. “There have been smarter, stronger and better-looking men than me who are no longer alive. All that is left for us to do is to keep on working as hard as we can and rebuild what is lost.”

Yisrael never lost his faith. He married a fellow Holocaust survivor, Batsheva, and together they made aliyah, settling in Haifa, where they raised their two children. Yisrael revived his candy business, making confections and selling them from a kiosk. Today, in addition to his children and grandchildren, Yisrael has, thank God, over 20 great-grandchildren.

In the coming weeks, as Yisrael celebrates his 113th birthday, they will be among the hundred-plus family and friends coming to Haifa to celebrate with him. “They will bless him and sing with him and dance with him and give out candies…. We are excited, we're happy, it is a great honor to celebrate his bar mitzvah. He has children, grandchildren, great-grandchildren and cousins and everyone is coming,” explained his daughter Shulamit.

Yisrael has said that he plans to have an aliyah on a Torah reading during a weekday morning service to mark the occasion. Although he has been a bar mitzvah for a century, he will finally enjoy the party that so many bar mitzvah boys receive.

His daughter describes Yisrael as an optimist who enjoys making others happy. “The Holocaust did not affect his beliefs…. He believes was saved because that’s what God wanted. He is not an angry person, he is not someone who seeks an accounting. He believes everything has a reason in the world.”

7 Ways You Could Help Israel

This Bus Driver Was So Impressed with a Group of Jewish Students, He Flew In for Their Graduation

How Instagram Brought Back This Nostalgic Soup
What Makes Eli Run?
The Tyranny of Materialism
Science Enters the Mysterious Inner World of Consciousness
BBQ Bourbon Cheese Kugel Recipe
Korach 5782: Visit to Lift the Spirit
That Time The Ivy League Found A Way To Limit Jewish Enrollment
Would You Rather Be Right or Happy?
Korach’s Unique Punishment
Who Was Josephus? The Controversial Backstory of the Famed Historian
1 2 3 … 2,888 Next »