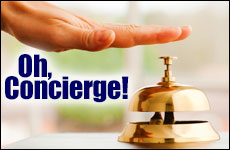 Actual results of a recent poll of hotel managers as to the strangest objects people have ever requested from the concierge.

It’s summer; time to pack up and go on vacation, where you can let go of the worries of everyday life and have carefree thoughts and feelings, such as the feeling that you probably forgot something at home.

I forget my Shabbos suit more often than I remember it.

This always happens. Even if we take the time to carefully pack everything into a suitcase, at some point we look up and realize that we’ve been carefully packing for several days now, because carefully packing takes a long time. So we quickly finish up, get out on the road, and go, “Shoot. We forgot the suitcase.”

Actually, we don’t say that whole long sentence. Most of us, when we realize we forgot something, do the same thing: We yell out the name of the object. Like that’s going to help.

But no matter. If you’re staying at a hotel, chances are you can always call down to the front desk and see if they can send something up for you. Such as a replacement child to take to the theme park. If you’ve forgotten something, chances are someone else has forgotten it at some point, and the hotel, which does this for a living, either has some to spare or knows where you can get it.

We’ve all called the front desk at some point, probably for phone chargers. Also we ask for sewing kits, because, for some reason, whenever we go out of town for a wedding or bar mitzvah, our buttons start popping off as soon as we get to the hotel.

But you might as well bother them, right? They’re asking for it. They put a phone in your room that you’re going to use to contact absolutely no one else in the world, because you have a cell phone. Assuming you didn’t leave it at home, plugged into the charger.

But the thing about forgetting something is that you learn a lesson from it and never forget it again. Unless it’s my Shabbos suit and you’re going to my in-laws, apparently. I forget my suit more often than I remember it.

And that’s why I’m presenting the results of a recent poll of hotel managers as to the strangest objects that people have ever requested from the concierge. My hope is that if you read these stories, you can resolve never to forget to pack those things. Unless you’re already on vacation, in which case I’ve provided helpful things for you or your loved one to yell out over the course of the article when you realize that you’ve forgotten whatever it is we’re talking about. Like this:

For example, one guest in England asked a hotel manager, “Can I borrow your shirt? I have a wedding to go to.”

Another guest called the front desk before she got there and said, “I would like a fish tank in my room that is sized approximately 30 cm wide, and fully stocked.”

You know how it is. Sometimes you get to a hotel, and you’re like, “Oh my goodness! I can’t believe we forgot the fish! Who’s going to feed them while we’re gone?”

And you can’t actually travel with a fish tank. Your car has like 28 cup holders, but nothing that will hold a fish tank. What are you supposed to do? Scoop out the fish and put them in 28 separate cups? What a pain. You might as well not even bring the fish.

So now you need to make a note that, when you get home, you need to buy new fish to replace them, because otherwise you basically just have, in your living room, a big glass bowl filled with murky water and fake treasure, which does not really class up your living room. But now, thanks to some quick thinking, this woman has them. Now she just has to figure out how to get them home.

But yeah, a lot of times, people forget their animals.

One hotel guest, for example, had come over to attend a small animal fair. (Meaning the animals were small. Also, I imagine, the fair.) But he forgot his small animal.

So generally, what experts recommend is that you always put your car keys directly on whatever the thing is you’re trying to remember. Unless it’s something that might eat the keys.

Of course, some people are way more responsible when it comes to travelling with pets. One guest at Seaport Boston was in town for a Travel Show, and he brought along his penguins, of course. Why would you not?

His wife chose not to come, though.

The penguins, meanwhile, stayed in his suite, although he kept them in the bathroom, so they could swim around in the various bathroom fixtures and whatnot.

– so that his friends would be comfortable, other than the fact that they were in a hotel bathroom. (“Hey! Why are all the towels so small?”)

The ice wasn’t a big deal, though, as every hotel has ice machines, and when the typical Jewish family goes to a hotel, they take at least that many ice cubes just to nosh on. The big deal is more about running back and forth with that tiny bucket, as well as holding down the button for five minutes while the machine makes weird noises and boots up and then finally spits out about 2/3 of a bucket worth of ice cubes. So then you hold down the button and wait again, and it makes more noises, and spits out another 2/3 of a bucket, which is way too many, and that’s why the floor near the ice machine is always slippery.

Maybe they should just bring the bathtub to the ice machine.

I’m not sure what this guy was feeding the penguins, though. Especially if he didn’t have ice to keep it on.

I also can’t believe we have to sneak our kids in so they can sleep on the floor, but this guy can just waddle in with his penguins.

But people forget other things for their bathtubs as well. One guest at Kiev’s Premier Palace Hotel called down to request that his entire bathtub be filled with milk.

“What? You said complimentary breakfast!”

It took room service several hours to fill his request, probably because they kept looking around to see if he’d brought along a really big jungle cat.

Or maybe he did bring milk, in his cup holders, but by the time he got there, it wasn’t milk anymore. And now he had nothing to put on his Costco-sized crate of cereal.

And one guest at a hotel requested a member of the staff come up and comb his hair.

I can see that. It can be hard to get the back of your head in a mirror, especially with penguins all over the bathroom. It’s bad enough they ate the shower cap.

Come to think of it, there are way too many things to remember to pack. So you might as well stop stressing, and resign yourself to the fact that you’re going to forget something. But don’t worry. Whatever you’ve forgotten, chances are the front desk has seen worse.