Obsessed with the Holocaust 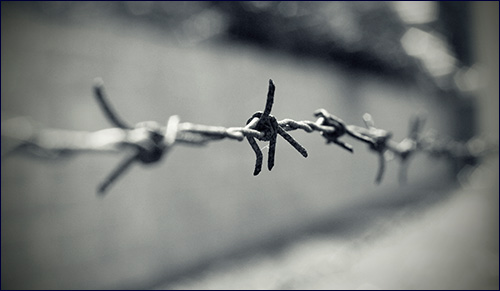 It’s crazy, I know, but I often imagine another Holocaust is right around the corner.

Once, when my youngest was going through a miserable teething bout, yelling ad infinitum, crying to no end that piercing baby cry, I randomly thought: What if we were in an underground bunker in Warsaw or Kovno? What if someone had taken us in to hide us? Would my baby and I have been thrown out? Would comrades have smothered her, God forbid? Then I stopped and had to ask myself, Isn’t it weird to be thinking like this?

I ran the obsessive thought past my husband, expecting him to dismiss it, but then he admitted the same idea had crossed his mind.

Is this just a reflex of being Jewish?

Truth is, ever since my first Holocaust documentary which I saw in fifth or sixth grade (who can forget the devastation of skeletal bodies stacked on wagons like pick-up sticks), I’ve been in a state. I’d call it a Holocaust state of mind but that feels sacrilegious. I have fed this state with books, starting with Eli Weisel’s Night, and throughout my teens and into my adult years. I read these books like I’m reading my own life. The obsession comes, it lessens, then returns. Always I’m wondering, What could I have done differently so I and my family would’ve escaped? Where would I have hid them when they came for us? In a laundry basket, beneath a load of dirty clothes? Inside the boiler – or the piano? Most of the time, they sniffed out the person anyway.

I can’t stand that feeling of no exit, no way out – makes me feel like a bug in a box, I will get squashed no matter what I do – and so I’m constantly concocting new rescue scenarios. Nuts, I know.

One of my writing students tells me a story how when the Nazis came pounding on her grandmother’s door, she offered the officer a mug of hot chocolate and the family was spared. A friend says how her father’s jokes had the Nazis rolling on the ground at the pits, convulsed with laughter, and how in this way some Jews managed to escape. Someone else relates how his father found favor in the eyes of the Nazis, and once, when his tooth rotted, a Nazi officer even arranged for expert dental treatment. The son shows me a picture of his father, short, thin, balding, utterly nondescript but with a goofy, enchanting smile. These improbable stories actually happened, as unlikely as they sound. I find myself practicing my own version of a goofy enchanting smile, but when that fails (it looks weirdly psychotic), I go out and buy boxes of hot chocolate. You never know.

It’s that “You never know” which follows me each morning as I pass the crossing guard, Anna, a sturdily-built, potato-faced woman in her late sixties. I emphatically say good morning and thank Anna for her work, and encourage my daughters to do the same. Why do I do this? Sure, I believe in showing gratitude and being polite, and Anna is one conscientious crossing guard, but something more calculated is at work here.

In the iconic Hassidic Tales of the Holocaust, a rabbi stands in line, waiting to be sent to the right (life), or most probably left (death) like most of the people before him. Finally he stands before the dreaded Nazi who will decide his fate, and just then recognizes his old neighbor, the one he used to greet every morning, in former, more peaceful days. Once again, he says, quietly, “Good morning, Herr Mueller.” The Nazi’s eyes flicker in recognition. He wishes his old neighbor a good morning back, and sends the rabbi to the right, to life.

How dreadful to feel that saying good morning is now freighted with imagined hopes for rescue at some later date.

It’s a well-known story, and its message – the power of a civic formality to foster a deeper connection, indeed to turn a monster executioner into a human being, even if only for a minute – still moves me, no matter how many times I re-read it. But how dreadful to feel that a normal human impulse, to say good morning, a civility for its own sake, is now freighted with imagined hopes for rescue at some later date. Say good morning now to all the “service” people, the gardener, the school crossing guard, the bus driver, the mail lady – after all, goes the thinking, you never know when you will need this person.

The tale has so seeped into my consciousness it has ruined – no, poisoned – harmless exchanges between me and my non-Jewish neighbors. I’ll be chit-chatting with Mrs. Paz, a more considerate and wonderful neighbor one could not find. She regularly drops off toys on everyone’s porch, fairy-godmother-style, games that she no longer needs, making sure to distribute them equitably among the neighbors. Her lovingly tended garden is a feast for my eyes. Still, when I casually admire her exquisite rosebushes or offer to bring a bag of her groceries to her front porch, I sometimes wonder (as horrible as this sounds): Am I secretly storing up credit in case of a Holocaust? I glance sideways at our non-Jewish neighbors and acquaintances: Which ones would squirrel us away in their basements or attics, and which ones would give us away? In Poland, 1942, neighbors turned their Jewish neighbors in for bags of sugar.

I’m caught between feeling ashamed of this line of thinking and justified in my anxiety. After all, there is a daily barrage of bad news for the Jews, what with an almost nuclear Iran frothing at the mouth to blast Israel off the map, the international community’s unremitting obsessive attention to Israel’s perceived failings, where the egregious abuses of other nations are totally ignored, fresh attacks against Jews across the globe. And every time an overtly religious-looking Jew does a disgraceful thing that’s reported in the press, I cringe even more. Now we’re really sunk, I think.

Of course I know all this focus on what they might do to us isn’t a way to live. It’s as if I’ve forgotten, really forgotten, that God runs the world. Basically, instead of praying and doing something positive and useful, I worry and get anxious, as if worry and anxiety were its own form of prayer.

Okay. I’ll try to relax, pray, and do something good for someone else. Somehow I’m brought back to Anna, the crossing guard. As the months pass, I can tell Anna has come to love my daughters and craves our hellos, and I too feel a real affection for her. There is something in the way she stands there at her post, in cold, rain or hot days, both soldier-like and motherly, making sure everyone safely crosses, that gets me each time. The last week of school, my daughters want to do something to show their thanks, so we buy and give her a beautiful mug and her face collapses a little as if she’s not used to getting tokens of appreciation, and we’re both smiling at each other, taking in this nice New Jersey moment. But then I go and ruin it all by thinking, Now I’ve really nailed it. For sure, she’d hide me in her basement at least a week.

But my affection for Anna is genuine!

The Hidden Message in Hinei Ma Tov
Why Are The Prayers Of Yom Kipur So Repetetive?
Ha'azinu 5783: A Time for Unity!
Twisted Thinking
Comments