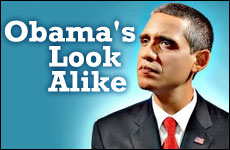 It’s not only the inside that counts.

Louis Ortiz was an unemployed Puerto Rican living in the Bronx. One night while sitting in a club, the bartender said to him, "Do you know who you look like if you would shave off your mustache? Obama! You look exactly like the President."

Ortiz went back to his cramped, dilapidated apartment and looked in the mirror. He shaved off his mustache and gasped at his image. He did look like the President! Staring down at his stained, ragged clothes he suddenly felt a sense of hope. He went to the closet and put on his nicest clothes. The stares of people on the street when he emerged from his apartment told him that he had a new job opportunity on his hands.

He has since posed for pictures and appeared in movies. He is thrilled with his new job. Everywhere he goes people ask to shake his hand and crowd around him. "Sometimes I want to shout out, ‘It's just me!’ But it's not just me anymore." Dressed in a suit and tie, he stands on the corner of streets in Manhattan and signs people's photos. "I'm living some weird dream right now." Ortiz says. "I looked in the mirror and thought: I can turn my life right side up."

I heard a related incident by Rabbi Yaakov Galinsky who spent four years imprisoned in Siberia. He was sharing a room with a Polish prisoner and every night this prisoner would put on his army uniform that he kept under his bed. He would stare at himself in the mirror, and then quickly remove his uniform and hide it under his bed. This went on every night. “Why are you doing this?” Rabbi Galinsky asked him.

When Ortiz dressed like the president, he began to actually act presidential.

Sometimes we are too quick to dismiss the importance of our appearances. “It's the inside that counts,” we hear repeatedly. That’s true, but it's more complicated than that. Yes, who we are is far more important than what we look like. But what we wear does affect our character and behavior. When Louis Ortiz dressed like a poor street beggar, he thought of himself that way. When he dressed like the president, he began to actually act presidential. He started to walk differently, to speak differently. And ultimately, he started to see the world and himself differently.

Studies show that students who dress up for an exam outperform students dressed in their regular clothes. This is why top athletes and coaches wear suits to big games before they put on their uniforms. When a person dresses seriously, he begins to take himself seriously and he begins to believe that he can win.

Putting effort into a dignified appearance also makes people happier. Like the general who put on his uniform every night to keep himself sane, a person who dresses in a respectable way feels better.

Obama's look alike is a poignant example of what psychologists call a "keystone habit,” a habit that creates a significant rippling effect. Exercise is a prime example. Researchers find that those who begin and maintain an exercise routine suddenly start eating better, working more productively and spending less money.

"Embodied cognition" is a growing scientific field that explores the keystone habit of changing one's clothing. It purports that we think with our bodies as well as our brains. Our thoughts are often based on physical experiences that trigger related abstract ideas. Clothing is one of those physical experiences. We look at ourselves in the mirror, and we take on the role that the dress or suit is associated with in our minds. Other people's perceptions of us change as well.

Think of how differently most people interpret a person dressed in ripped jeans versus a man wearing a designer suit. Clothes don't make the man, but they may make the mind. A white lab coat induces people to pay more attention to their environments. An artist's smock may make us more creative. And dressing like people we admire may bring us one step closer to becoming like them.

It's the inside and outside together that count, connecting everything we do and wear with our true inner selves.

The Comfort of Blame

Step Off Your Cliff

Three Responses to Coronavirus
It Takes A Lot Of Faith To Be An Atheist
How Instagram Brought Back This Nostalgic Soup
What Makes Eli Run?
Comments
MOST POPULAR IN Spirituality
Our privacy policy