Now is the Time to Move to Israel 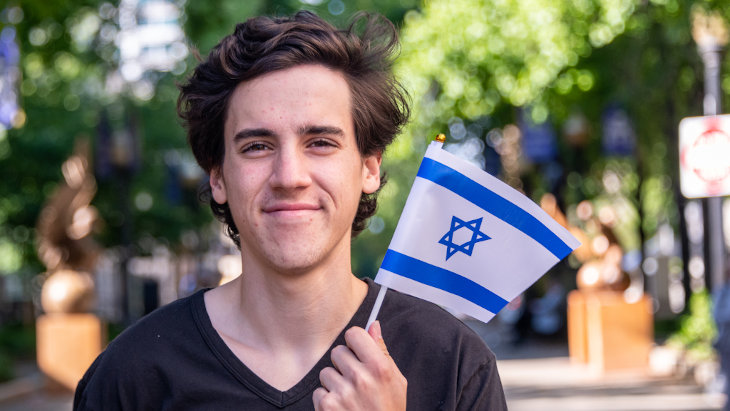 We needed a final push to get us there. The pandemic and rise in anti-Semitism were it.

My fiancé Daniel and I just boarded the plane at Ben-Gurion Airport to go back home to Los Angeles and I burst into tears.

“Yes. I’ve never felt this before,” I say between sobs. “I don’t want to leave.”

“That’s because Israel is your home.”

The year was 2015. I’d just spent three glorious weeks in Israel studying at a seminary in Jerusalem and then touring the country for a few days. During the trip, Daniel proposed to me at the Kotel on a snowy night. I was going home with a beautiful ring on my finger and hopes for our bright future together, but I was still melancholy.

I didn’t want to leave; I was on a spiritual high. When I prayed at the Kotel, delved into Jewish wisdom with incredible teachers, heard Israeli music for the first time, tasted the delicious shawarma and saw the stunning sea in Tel Aviv, I knew I belonged there.

But I had to get back to my normal life. How could I just move to another country that was over a 20-hour journey away from LA? I wasn’t born Jewish – would they accept a convert? I didn’t speak Hebrew, so how would I get by?

There were just too many questions. It was way too complicated to even think about. And so I focused on our wedding and marriage instead.

A few years later, after Daniel and I had gotten married, anti-Semitism started increasing in the United States. I felt scared to go back to shul after the Pittsburgh massacre and encouraged our board to hire an armed guard. I told Daniel to cover his yarmulke with his baseball cap after the attacks in Crown Heights and a Persian synagogue just down the road from us was ransacked one Shabbat. I was freaked out that Daniel was at our local Chabad during Pesach last year when just two hours away a shooter had attacked the Chabad of Poway that same day.

So we started planning to make aliyah. “That’s it. We’re really leaving this time.” But then I got pregnant with our first child, our daughter, and we focused on her.

When our daughter was five months old, COVID-19 lockdowns began in LA. We were suddenly forced to stay inside and celebrate Pesach and Shavuot, two of my favorite holidays, alone. And on Shavuot, as I was taking my daughter on a long walk around the neighborhood on a beautiful sunny Shabbat, a man came up to me and told me to get inside by 8 p.m. because of a curfew. I saw helicopters circling downtown. I heard sirens in the distance. I couldn’t turn on my phone to see what was happening, so I ran home.

After Shabbat, I turned on my TV and saw live aerial footage of the shopping mall next to me after it had just been looted. I wrote articles about Jewish businesses looted during the riots, as well as synagogues and pharmacies spray-painted with anti-Semitic language.

I’d had enough. I logged onto Nefesh B’Nefesh and spent the next few weeks filling out all my forms for making aliyah. This time, I was for real.

Though the aliyah process will take several months, my husband and I hope to go as soon as we can. It’s been our goal to live in Israel for a long time; he loved it when he spent a year there post-high school. We needed a final push to get us there. This is it.

We’ve heard from a few Holocaust survivors that the kind of events occurring in the U.S. now are eerily like what they experienced. I hope that things get back to normal in America but I no longer feel completely secure.

But we aren’t making aliyah for that reason. Instead, we see that it’s now or never. Many people have told us that if we don’t do it while our daughter is young, then we never will. A lot of friends have told us they wished they’d made aliyah when they were in our position, and they regretted not doing it. I absolutely love America, but I can’t envision staying here for the long term because Israel seems to offer so much more.

In Israel, hopefully our daughter will have Jewish pride, something that is tough in an anti-Semitic environment and in our anti-religious LA culture. We want to be surrounded by our Jewish brothers and sisters, especially if another world crisis happens again.

We want to contribute to Israel’s economy and bring our unique skills there to build it up, helping to ensure the future of the state. We want to feel safe under the protection of not only one of the finest militaries around, but also, of course, God where we palpably feel His presence. We want to experience what it’s like to live in the only Jewish state in the world and feel its history, as well as realize a dream that so many generations before us could not.

I imagine returning to IsraeI, smiling at the people greeting us with Israeli flags, and tears are running down my cheeks. But this time, they'll be tears of joy.