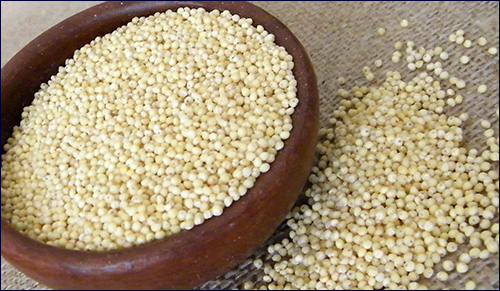 Millet is the world’s sixth most important grain. And it’s delicious. A short primer on how to cook with it.

The grain millet is woefully overlooked. It is mildly sweet and nutty and so versatile that it can be used in soups, pilafs, and cookies, to name a few. Millet has a soothing, comforting quality that makes it ideal for winter meals. It’s nutritious – providing fiber, iron, B vitamins, manganese, phosphorus, magnesium, folic acid, calcium and zinc.

Millet is the generic name given to more than 6,000 species of wild annual grasses found all over the world. Millet grains are usually small and yellowish in color. They are reminiscent of quinoa. There are many types of millet. The main types are called pearl, foxtail, proso and finger. Yellow proso is the type most often found at health food stores. (The millet sold for pet food has the indigestible outer hull.) Depending on the variety, millet can grow anywhere from one to 15 feet tall. Most millets grow best in dry, warm climates. Millet matures in about 65 days, which is quicker than most grains. 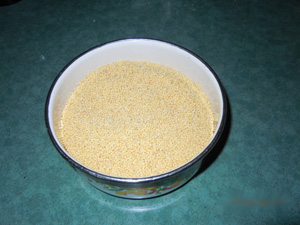 There is mention of millet in the Prophets. The prophet Yechezkel states, “Take wheat and barley, and beans and lentils and millet and spelt and put them in one vessel and make bread from them.” (4:9) In the Middle Ages millet was more widely eaten than wheat.

In Western Europe and North America, millet has mostly been relegated to bird and feed for livestock. However, since the 1970s millet has been gaining popularity as a nutritious, quick-cooking and tasty whole grain.

Millet has many health benefits:

Today, millet is the world’s sixth most important grain. It sustains more than one-third of the world’s population. The world’s largest producer is India, with eight African countries and China comprising the rest of the top ten producers of millet.

Because millet is gluten-free, it does not make good leavened bread when used alone. However it can be combined with other flours to make delicious breads. The Hunzas, who live in the remote Himalayan foothills and known for their excellent health and longevity use millet as their staple grain. They make whole grain chapatti flat bread, soups and porridge with millet. In western India, since ancient times, millet is used to make roti, a dense, flat cake made from millet flour. In Eastern Europe, especially Poland and Hungary, millet is used to produce fermented drinks as well as sweet and savory porridges called kasha. In Ethiopia the ancient flat bread called injera is still made from teff millet. Millet is used to make beer in much of eastern Africa. Millet stalks are still used in making brooms.

You can substitute up to 30% millet flour in your favorite baking recipes, and even more in foods like cookies since they don’t have to rise very much. For a nuttier flavor, toast the millet before cooking. Toast it in a dry skillet over medium heat, and stir it constantly until fragrant, about 3 minutes.

Lorna Sass, in her book Whole Grains Every Day, Every Way recommends these ways to cook millet: 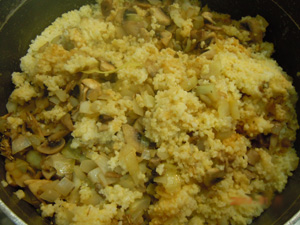 A recipe that my family loves is Millet Pilaf. Depending on who is home, I sometimes double the recipe. For this recipe I cook the millet the following way:

Bring water to a boil. Add millet, butter and salt. Return to a boil, stirring frequently. Cover and simmer over medium-low heat for 25 minutes or until the water is absorbed, but it should not be dry.

Sauté mushrooms and onion. Mix with millet. Season with thyme and tamari sauce.

To vary, try different vegetables. Or use leftover vegetables and omit steaming step.

For those who like to make their meals in a crockpot so that they can return from work with a ready meal waiting, here is a tasty option.

Toast millet in a dry frying pan over medium heat for about 5 minutes; stir constantly to avoid burning. Add all ingredients to a crockpot and cook for 4 hours on high or 8 hours on low.

Bring water and salt to a boil in a pot. Add millet and return to a boil. Cover, reduce heat to low and simmer for 35-40 minutes.

Heat oil in a large pan over medium-high heat. Add onion and cook until soft, about 5 minutes. Add garlic and ginger; cook for 1 minute. Add broccoli, carrots and water chestnuts. Cook until vegetables are tender, about 7-10 minutes. Add millet and cashews.

Combine soy sauce, rice vinegar honey and cornstarch. Pour over stir-fry and cook until sauce is absorbed, about 2 minutes. Remove from heat and serve. Makes 4 servings.

So now you know that millet is not just for the birds! Enjoy these recipes and enjoy better health.

One Drink Too Many: My Journey of Breaking Free from Alcohol
The Scandalous History of the Aleppo Codex
Who was Two-Gun Cohen?
Why Really Everyone Believes in Free Will
Should Jews Support Ukraine?
The Jews of Cuba
Comments
MOST POPULAR IN Kosher Recipes
Our privacy policy