Not Everyone Deserves a Trophy 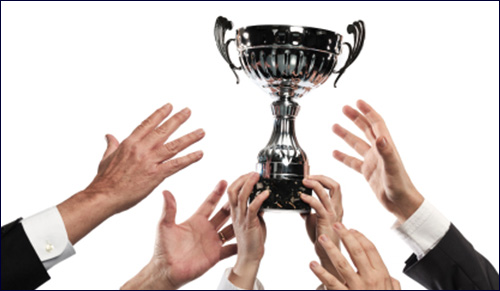 In a recent, NY Times op-ed piece, “Losing is Good for You,” Ashley Merryman comments on the common practice of giving children numerous trophies and awards just for participating in a sport. She writes:

As children return to school this fall and sign up for a new year’s worth of extracurricular activities, parents should keep one question in mind. Whether your kid loves Little League or gymnastics, ask the program organizers this: “Which kids get awards?” If the answer is, “Everybody gets a trophy,” find another program. Trophies were once rare things. Today participation trophies and prizes are almost a given, as children are constantly assured that they are all winners…Po Bronson and I have spent years reporting on the effects of praise and rewards on kids. The science is clear. Awards can be powerful motivators, but nonstop recognition does not inspire children to succeed. Instead it can cause them to underachieve. Carol Dweck, a psychology professor at Stanford University, found that kids respond positively to praise; they enjoy hearing that they’re talented, smart and so on. But after such praise of their innate abilities, they collapse at the first experience of difficulty. Demoralized by their failure, they say they’d rather cheat than risk failing again.” (NY Times, September 24, 2013)

I was raised in this trophy culture; every child in our Sunday Little League received a little gold soccer player that would join the other meaningless awards on my dresser each year. And it was true that ‘trophies for all’ dulled our motivations to give the game our best efforts. Indiscriminate rewards taught us to quit when we were frustrated. Instead of learning the art of perseverance, we gave up as soon as we were tired. We needed to learn to take the option of quitting off the table.

We needed to learn to take the option of quitting off the table.

I remember the summer that I learned this on my own. It was the summer after my freshman year in college, and my best friend and I wanted to go on a camping trip in Maine. At first our parents protested. But we showed them the maps and the camping ground locations and our list of supplies, and they reluctantly agreed. Driving with the windows down on open highways with our tent stashed in the trunk, I remember the aroma of freedom. The smell of light and evergreen trees and black coffee all blending into each other. We were on our way, and it didn’t even seem to matter where we were going.

This heady feeling lasted until we reached the first camp site and it began to pour. Our tent was supposedly waterproof but after 45 minutes of dropping and picking up and trying to connect the pieces, we began to wonder if sleeping in the car would be a better option. The rain was coming down harder and we looked at each other across the pile of canvas and poles heaped between towering pine trees. We were sopping wet, exhausted and totally clueless. We didn’t want the humiliation of sleeping in a car on our first camping trip, so we kept trying, the ground becoming muddier and the tent becoming wetter by the minute.

But we were slowly making some progress. Half way through, a nice family camping beside us offered to help, and within minutes, we were finished. Our tent was up. Later that night, I looked up at the still soaked roof of the tent and felt a sliver of new confidence drip down on me along with the sporadic drops of water.

The next morning, we set out on our planned mountain climb. The trail was challenging and long. In the middle, we reached a narrow section that required us to cling onto steel rails that were jutting out of the rocks. My friend wanted to turn around, but building that tent in the pouring rain had begun to change something inside of me. “We can make it to the top. We can do this.”

Climbing the last steep section of the trail, I felt the exhilaration of accomplishment. We sat on the highest rock absorbing the piercing beauty. And then we heard the cries. At first we thought it was an animal caught in the bushes below us. But when we climbed down to investigate we saw him – an elderly man lying on the rocks. There was a huge gash on his head and blood all around him. For a second we stood there in shock, and then knelt down beside him. I tore up my sweatshirt from my knapsack to wrap around his head while my friend pulled out the heavy, ancient cellphone that our parents had insisted that we bring in case of emergency. There was no signal for an agonizing minute, but then it worked. We took out our map, gave the emergency operator the name of the trail and explained that we were at the summit. We reassured the injured hiker that help was on the way, and a half hour later the sun began to descend, a helicopter arrived with paramedics.

I discovered how effort itself becomes its own reward.

What would have happened if we had turned around in the middle of the trail? If we hadn’t built up our confidence by persisting to build that tent in the pouring rain. If we had quit when we were frustrated, this man might have died alone on the top of the mountain. And as the rangers guided us down the mountain in the cobalt twilight, I knew that I would always remember that first sliver of newfound confidence. I learned the power of not quitting. I discovered how effort itself becomes its own reward.

Which is why the conclusion of the op-ed piece is so crucial: “If children know they will automatically get an award, what is the impetus for improvement? Why bother learning problem-solving skills, when there are never obstacles to begin with? If I were a baseball coach, I would announce at the first meeting that there would only be three awards: Best Overall, Most Improved and Best Sportsmanship. Then I’d hand the kids a list of things they’d have to do to earn one of those trophies. They would know from the get-go that excellence, improvement, character and persistence were valued.”

In life, we lose far more often than we win. We encounter obstacles more frequently than we travel along smooth paths. We find ourselves stuck in the mud in the pouring rain and on the edges of steep cliffs, and we need that confidence that only comes from our own genuine effort. In spiritual matters, the Talmud says: “If you work and don’t succeed, it means that you didn’t work hard enough.” We have a guarantee of spiritual success if we put in maximum effort. Because deep down it’s not the trophy that we want; it’s the challenge. We want to sit on the highest rock at the summit and know that no matter how long it took us to climb up that mountain, we struggled and pushed until we made it to the top.

Life is not just about showing up. It’s about playing our hardest until the end.

Drop Your Armor: Don't Be Afraid to Be You
Why My Iranian Mother Didn’t Want Me to Become a Religious Fanatic
The Jewish History of Prague
Why the Sexual Revolution was Bad for Women
Comments
MOST POPULAR IN Spirituality
Our privacy policy
Aish.com Is Looking for Great Writers