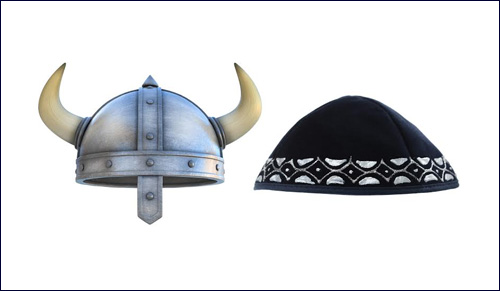 One is 6’5”, blonde, with suspenders, rocking in his chair reading: “Lutefisk Fishing.” Despite his depression, when the main character, Ole the fisherman, describes falling into a fjord, the man picks up his pipe, thinks, then says “Uff Da.” His wife Lena asks why he’s laughing hysterically.

The other is 5’7”, weighs 195 pounds, wearing plaid shorts, reading “The Odd Couple.” Despite his minor indigestion, he hollers for Leah, his wife when Oscar tells Felix: “I told you I can't stand little notes on my pillow!” The hysterical couple decides to make the play their next fund-raiser.

If you haven’t figured out whose Nordic and who’s Jewish yet, go take three matzoh balls and call me in the morning.

I have two female friends who are of Scandinavian descent. Each, a gorgeous blonde tower, could be the figurehead of a Viking ship.

I, on the other hand, am 5’1” with hair that resembles fucilli that got caught in the spin cycle.

We took a picture together. There’s them … and on the very bottom, a few spirally curls (me). Our favorite game is standing next to each other and telling strangers we’re the Larsson-Cohen triplets who were separated at birth.

Today, my dear readers I give you:

Nordish: For Scandinavians depression is not only normal, it’s a festival of misery. Even the Vikings were depressed (I looked it up). What can you expect from people who spend almost 365 days in the freezing dark and consider flying “South” a trip to Minnesota? More, what can you say about a region where Ingmar Bergman’s favorite film was “Winter Light” (“Nattvardsgästerna”), which follows Gunnar Björnstrand around a church talking about his existential crisis – for two hours – in Swedish. When I saw it, there was some comic relief. The guy behind me was snoring so loud, even the sub-titles quaked. This, while his artsy wife kept knocking him awake with her stiletto.

Jewish: Our depression comes from having rotten neighbors who’ve sent us running while trying to kill us for 3,500 years. But instead of making movies about a rebbe shlepping around the shul hocking himself silly about our tsouris, we go to see “Winter Light” and make it a 1,000 word anecdote about “the snorer and the stiletto.”

Nordish: In 10 degree weather, what DNA could mutate, especially when it’s the same DNA. I ask you, when was the last time your neighbor said, “You know, I need a change! I’m moving to Jyväskylä!” One Sven or Lena can create a nation of tall, blonde, blue-eyed, depressed Svens and Lenas, which is why they have no interest in cloning. They invented it.

Jewish: OK, there is a Jewish stereotype; a Jack Klugman nose, a Sylvia Fine figure, and

true, more of us sport “Jew-Fros” than your average Finn. Ah, but as we’ve wandered from place to place, our DNA does offer us a range. We can be short and curly, curvy and curly, or zaftig and curly. We can look like Woody Allen or Marty Allen. Some of us also look like Bar Refaeli (Urgent! Get the DNA Ancestry Kit!)

Nordish: They adore fish and white stuff. If the food isn’t white, they scrape off the color and add more white stuff like gravy, to carry other white stuff (sugar, salt or butter) down their throats. Who else would have a Cream of Wheat cook-off? One traditional dish is lutefisk, which, according to author John Anderson, is “codfish dried in icy Nordic air, then soaked in lye, like Drano.” To up the survival rate, their meals are little appetizers without toothpicks, such as white fish balls, meatballs in mushroom soup, and Jell-O smothered with cottage cheese. A successful smorgasbord has the power to cause snow blindness.

Jewish: True, we have herring in common. The difference is we didn’t necessarily catch it. We have, however, made a fortune from it when two young Czech Jews, Victor and George Heller, started selling it in jars the U.S., expanded their line to “foods of color,” then formed Vita Foods (1930) which makes millions, not just from herring but from orange lox.

Nordish: Scandinavians love ice fishing, boat fishing, dock fishing, fly fishing, eating fish, putting little dolls inside of bigger little dolls, staring, and sleeping. The adventurous might ski, then drink, fish, eat fish, stare, and sleep. Anything that induces a coma is a worthy hobby or failing that, anything that doesn’t require talking – unless it’s about making fun of people from other Scandinavian countries who they feel are dumber or drunker.

Jewish: Jews have something called ITH (“intent to hobby”). This is of course beyond napping, eating, and watching people sleep and eat. We do a lot of “signing up” to gyms, sports teams, fitness programs, and Boards. Then we return to our real hobbies – eating, talking, and arguing over whose shul is more frum.

What can you say about a people whose favorite color is black, who value bait, staring, and Melmac, go to costume parties as themselves in clogs, and named their high octane favorite wine Glögg, pronounced glooog? However, they think they’re funny, which is the funniest thing about them.

What is a party game played by Swedes?
One Swede goes into a box and the other Swede tries to guess which Swede is in it.

The difference between a Finnish wedding and a Finnish funeral is that at a funeral there's one person not having vodka.

Wait, catch a breath from your hysterics. Like Jews, their humor is based on hardship – but not theirs; other people’s. If their neighbor’s rice pudding turns brown, it’s a knee-slapper capable of bringing on a whopping “Uff Da!” Of course laughing is not involved.

Jewish: "How do you tell an extrovert Finn? When conversing with you, he's actually looking at your feet instead of his own!" If you laughed, trust me, you’re farmisht ancestors took a wrong turn running out of Russia. Ah, but what happens when you cross Nordish with Jewish? You get the Great Dane Victor Borge (Rosenbaum), a magnificent Clown Prince, which only goes to prove, no matter where we are, a Jew can even milk a joke out of a sauna.

Step Bubbiehood
What Makes Eli Run?
The Tyranny of Materialism
Science Enters the Mysterious Inner World of Consciousness
Comments
MOST POPULAR IN Jewlarious
Our privacy policy