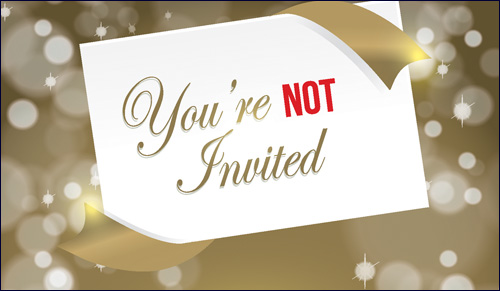 We’re not schlepping to Israel for the bar mitzvah of our neighbor’s son, so why are they sending us a fancy schmancy invitation?

Some Jews living in the United States, when planning a bar or bat mitzvah, choose to celebrate their event in Israel. That certainly is a wonderful decision and anyone who so chooses should be roundly applauded. Some of these Jews, however, also elect to send out full-fledged, fancy-schmancy invitations to all of their friends and acquaintances, knowing full well that the vast majority of invitees will not be schlepping to Israel for their celebration. Some hosts will even invite their annoying neighbors, mortal enemies and backstabbing colleagues, all because they know that none of these invitees will actually make the journey overseas. Thus, a (cynical) argument can be made that, under certain circumstances, such an invitation to the Promise Land promises to be one of the most disingenuous invitations ever issued.

There are of course legitimate reasons for choosing the Kotel over a hotel.

So, the question is: if someone is making a bar/bat mitzvah celebration in Israel, why would they go to the trouble of inviting those who obviously will not be attending? What is the purpose of these “non-vitations”?

As a preliminary matter, we all can agree that Jews have celebrations in Israel for a variety of very valid reasons. For example, some Jews have oodles of family living in Israel so it makes perfect sense to party in the Holy Land. Others, however, abuse this notion. They mendaciously claim that they have "family in Israel" but then it turns out that they only have a (i) third cousin twice removed who sublets an apartment in Ashdod for two weeks during the year, (ii) distant in-law who is a freelance flight attendant for El Al or (iii) deceased relative buried on the Mount of Olives. That is not what is commonly meant by having "family in Israel."

Other Jews make bar/bat mitzvah celebrations in Israel for admirable spiritual reasons, believing that a celebration in the Holy Land will be far more . . . holy. That, too, is an absolutely legitimate rationale for choosing “The Wall” over a gala ball or for choosing The Kotel over a hotel. But, not every activity in Israel is necessarily filled with such spiritual splendor. Guess how much spirituality there is in zip-lining? You guessed it: zip. The beaches of Eilat are known for many things but spirituality is not at the top of the list, though parasailing is an uplifting experience. Eating the fabulous food at Jerusalem's Machane Yehuda market is not really a spiritual experience, although I know some fanatical foodies who would vehemently disagree.

Some Jews make celebrations in Israel based on thoughtful, responsible and logical financial considerations. They run the numbers and decide that a larger affair in the States will not be as worthwhile as a smaller affair in another state, the State of Israel. This, too, is totally understandable, especially for nuclear families who have not spent meaningful time in Israel together. (Yes, if your parents and siblings are experts in fission, then you literally have a "nuclear family." And yes, an insecure, narcissistic nuclear physicist who is desperate for praise is just “fission” for compliments.)

Unfortunately, there are a few overly-judgmental cynics out there who believe that some "invitations" to celebrations in Israel are resoundingly insincere, regardless of the rationale behind the location choice. These cynics insist that the hosts are simply looking to curry favor in their social circles and to earn extra credit for what actually are empty invitations. Sadly, when these cynics receive such an invitation, they sardonically interpret it as saying: “You are NOT cordially invited to join us for our celebration.” If you are among these cynics, there is something you can do to retaliate: show up! That's right, call their bluff, throw down the gauntlet, buy a plane ticket and make a personal appearance in Israel. You also should try to convince some of your similarly invited friends to do the same, thus blowing the party’s head count sky-high. Just imagine you and your entire gang of bogus invitees storming into the celebration in Israel, completely unexpected and unannounced. As the leader, you may wish to walk right up to the host and have a conversation that goes a little something like this:

HOST: Oh, wow. I can't believe you all actually showed up.

YOU: Of course we did. How could we not? You invited us, right?

YOU: Well, we were equally touched by your generous and sincere invitation.

YOU: Anyway, we're all starving but I'm sure you've ordered enough food to feed all of your invited guests. Otherwise, why invite us, right?

HOST: Yeah, right. Of course. Would you excuse me for just a moment?

Bottom-line: As the shocked host goes into an emotional cardiac arrest, and as the caterer scrambles to make emergency arrangements, you nod to your followers and, with a wry smile, proudly exclaim: "Our work here is done."