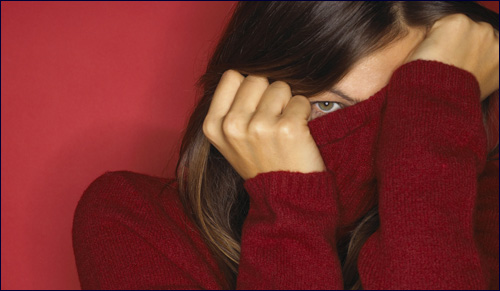 I really want to make my dreams come true, but I’m too scared of what people will think.

I have so many dreams that I want to follow. Some of them include being a public figure. I want it so badly but I get so insecure in front of people. What if they think I look ugly or act weird? You might tell me to not care what people think but that doesn't work. I DO care. I know I have the talent but I'm scared to actually show it to the world. But I want to. I want to make a difference. I just don't know if I can really do it. I don't have the confidence. I always feel like I don't have the poise and charisma for it. I'm a teenage girl who really wants to make her dreams come true, but I'm too scared I'll look like a nerd.

About 10 years ago, I gave my husband a gorgeous green marble smooth stone with the word “confidence” stamped on it. He keeps it on his night table. The other day, I found my 6-year-old son holding that confidence button, and I could see him thinking about it and pondering it.

Do the right thing no matter what anyone thinks.

I’ve always considered it my job to teach my children certain basic things. Once I’ve transmitted those few basics to them, I can relax a bit and know my job is done. One of the major ones is to transmit to them the feeling and the thought: do the right thing no matter what anyone thinks. You might be nervous and worried about “What will people say? What will people think of me?" but push through the nervousness and do the right thing anyway. I’m not telling you not to care what other people think. I’m telling you to do the right thing anyway, no matter how nervous you are about what they think of you.

After I found my son considering the “confidence button,” he got a scratch on his thumb. I offered him a Snoopy Band-aid, but he balked. “The other kids might make fun of me.” “Well,” I replied, “you can have an Elsa one instead!” He got a good laugh out of that. (If you don’t know who Elsa is, let’s just say a Disney princess Band-aid would probably be more embarrassing than a Snoopy one for a six-year-old boy to wear to school.)

But I used it as a great opportunity to impart a lesson to him. I said, “Honey, if you're just totally confident, it doesn't matter what kind of Band-aid you wear.”

Do you know what my 6-year-old son answered? "But I don't have confidence." How adorably true!

Then I told him what I’m telling you now.

The way you build confidence: Just do it.

Nike’s slogan is brilliant because it’s true. You build muscle by “just doing it”—“it” being whatever is hard for you. You keep doing it, a little at a time, until your capabilities grow incrementally and incredibly. You’re scared? So what? Just do it anyway. Do the right thing, no matter what other people might think of you. That’s how you build confidence.

I know I've I told you about my cliff jump experience already, but that was a long time ago, so I think it's time to break it out again! When I was about 9 years old, I went to a camp in the woods in Missouri, and we swam in a lake and did all kinds of lake-related activities. One of the activities was called “The Cliff Jump.” There was a wooden platform jutting out of a cliff about 12 feet above the surface of the lake, and the activity was to climb up the cliff, jump off the platform into the lake, swim to the cliff, and do it all over and over again.

I was 9, the platform was really high, and I got the sense that there were probably snakes in that open-water part of the lake. So I was too scared to jump. I sat on that wooden platform in the sun, getting hotter and hotter. I had legitimate concerns: what if I get hurt? What if there’s a poisonous snake? What if there’s a non-poisonous snake that swims right near me??

Just do it. Take the plunge. Power through your fear, building up your confidence as you go.

But the bottom line is that everyone else was having fun, and I was just getting hot. Finally, I decided to take the plunge. It was amazing! It was so much fun! I was so excited to do it again—and just then, the counselor said, “Okay, time’s up!”

What did I learn? Just do it. Take the plunge. Power through your fear, building up your confidence as you go.

I always like to turn to literature when I want to see how different kinds of people deal with an issue. Because of your question, I’ve compiled a list of good books about overcoming fear. About people being brave and doing what needs to be done, despite their feelings that maybe they weren’t up to the challenge. Here it is:

(FYI: some of these books are so good that they’ve been made into movies. But often movies based on books fall far short of their literary parents. For you to get the benefits I intended for you from these books, you probably have to do it the old-fashioned way, and read them.)

My dear questioner: if you try, it's true that you may fail. But if you never try, you definitely will never succeed. And you’ll constantly wonder what might have been. Failure doesn't scare me: that's how we learn. Embarrassment doesn't scare me: it keeps us all humble.

Because it’s the summertime, I have time to share with my kids books and Ted talks and experiences that we don’t have time for during the year. One of the experiences I shared with my daughter this month was a movie that I saw as part of my high school curriculum: The Karate Kid (the old one, from 1984). There were so many lessons to be learned from that story. Namely, in your case, that the way to overcome your fears is to repeat and repeat and practice and practice so that you become an expert. And so that your knee-jerk, first, automatic reaction is so deeply engrained in you that you’ll automatically respond that way. So I say to you: practice, practice, practice. Wax on, wax off. All day long.

When my now 22-year-old was in first grade, a substitute teacher taught the class for a day. One very intelligent child stood up as soon as the sub had introduced herself, and informed her, “I’m the smartest kid in the class.” My son immediately stood up and told her, “We’re all the smartest kid in the class.” And he was right: you have a dream, and you have just as much ability to fulfill that dream as anyone else does. All you have to do is just do it.

Q&A for Teens: Homesick at Camp

Q&A for Teens: Nobody Loves Me

How You Can Deal with Pain

Q&A for Teens: I’m Being Bullied
Scientific Curiosity and the Divine Encounter
Mind Over Milkshakes
Love the Convert
Comments
MOST POPULAR IN Current Issues
Our privacy policy
Aish.com Is Looking for Great Writers