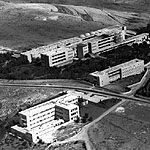 In 1948, a convoy of 78 Jewish medical personnel, en route to Hadassah Hospital in the Jewish enclave of Mount Scopus in Jerusalem, were killed in an Arab ambush. The ambush cut off the hospital from the rest of Israel and forced Hadassah to relocate, eventually opening a larger medical center in 1961 at Ein Kerem. The Mount Scopus facility would reopen after Jerusalem was reunited in 1967.

Breaking Barriers and Baking Babka: How One Jewish Mom Became a YouTube Sensation
Is Grease the Word?
In the Shadow of David and Goliath
Scientific Curiosity and the Divine Encounter
Dried Fruit Compote
King Sennacherib and the Siege of Lachish
Is Grease the Word?
Dried Fruit Compote
Scientific Curiosity and the Divine Encounter
Comments
MOST POPULAR IN Day in Jewish History
Our privacy policy
Aish.com Is Looking for Great Writers