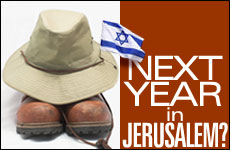 Since declaring its independence in 1948, Israel has been in conflict with many of the neighboring Arab countries, resulting in several major wars and decades of violence until this day. I myself have never visited Israel. Part of the reason is no doubt due to the frequent news images of this violence, particularly the random suicide bombings in civilian gathering places such as cafes, stores and busses. So, when my 21-year old son Joey informed me that he had the opportunity to take a 10-day trip to Israel, I naturally had mixed feelings -- on the one hand, I didn't want him to go. On the other hand, I really didn't want him to go.

Actually, I envied him. While Joey has already lived abroad for a year, I've never been to Europe, or for that matter, anywhere outside of the U.S., Canada and Mexico. Unless you count Hawaii as foreign travel, which I do, since many of its words and names sure sound foreign. I guess you could call me an armchair traveler. That's right – I've traveled to some of the loveliest armchairs in our nation. It's sad, I know. Most of my "world travel" has taken place in front of the TV, watching the Travel Channel, or reading "National Geographic" magazine. On the positive side, packing for these trips has been an absolute breeze.

In college, I had the opportunity to spend junior year abroad in England, but was so jazzed about getting into movies and restaurants for free as my school paper's movie and restaurant reviewer, not to mention the ego value of seeing my reviews in print, that I passed it up. But Joey wasn't passing it up. It would be a wonderful adventure for him – not to mention the fact that it would be free – paid for by an organization called Taglit-Birthright Israel. That's right – free. Always a big plus in my book.

It would be a wonderful adventure for him – not to mention the fact that it would be free. Always a big plus in my book.

But then, there was that pesky violence thing. Despite my limited travel experience, I was of the firm opinion that nothing throws a damper on a delightful foreign trip more than perishing in a terrorist attack. What are you going to write home on your postcards then – "Having a wonderful time – wish I was still here"? And I didn't want that to happen to Joey. Or to anyone, for that matter. Okay, maybe to a political figure or two, and they know who they are. But I digress. I decided to check this organization out for my own peace of mind and for Joey's safety. At the very least, maybe some reassurance could diminish my hyperventilating.

I discovered that Taglit-Birthright Israel provides the gift of first time, peer group, educational trips to Israel for Jewish young adults ages 18 to 26. Its founders created this program to send thousands of young Jewish adults from all over the world to Israel as a gift in order to diminish the growing division between Israel and Jewish communities around the world, to strengthen the sense of solidarity among world Jewry, and to strengthen participants' personal Jewish identity and connection to the Jewish people. Okay, cool. So far, so good.

And why is it free? The gift of the 10-day trip is provided by Taglit-Birthright Israel's partners: private philanthropists through the Birthright Israel Foundation; the people of Israel through the Government of Israel; and Jewish communities around the world (North American Jewish Federations through the United Jewish Communities (UJC), Keren Hayesod and the Jewish Agency for Israel). One thing was immediately clear – philanthropists rock. That would be one job I'd love; And I seemed to have all the traits necessary for being one, except, you know, for that, um, whole lot of money thing.

The itinerary was amazing and exhausting just to read, let alone do. Joey would be visiting Independence Hall, in Tel Aviv-Jaffa, where the State of Israel was born and read aloud the inspiring Proclamation of Independence. He'd visit Jerusalem's Western Wall, the center of Judaism's spiritual existence, and its ancient Roman marketplace. The world-renowned Bahai Gardens in Haifa was also on the itinerary, as were the ancient synagogues and modern art galleries of Galilee. Joey would hike through Tel Dan's nature reserves, with its canyons and waterfalls and remnants of cultures thousands of years old. He'd go on archaeological digs and cave explorations, rappel down a cliff in the Mitzpe Ramon crater, visit Israel's Holocaust Memorial. He'd even ride a camel in the desert, float effortlessly on the Dead Sea, and enjoy a mud bath at the Ein Gedi Spa. Then, on his second day…

Okay, so he'd be busy. But would he be safe? According to the Taglit-Birthright website, "We are constantly reviewing all security measures and will implement the most stringent security measures throughout your trip to ensure that we provide a comprehensive safety umbrella." My only son is travelling in Israel and you're offering him an umbrella? Okay, granted, a "comprehensive safety umbrella," but what the heck is that? Must be one really strong umbrella to withstand any attacks. But it turns out the organization takes special care to avoid potential problem areas, does not use public transportation, clears the itineraries through government authorities, carries a Global Positioning System so that authorities are aware of each group's location at all times, and changes the group's itinerary immediately to reflect any heightened risk or security concerns. Armed escorts and highly trained medics accompany the group. Plus, families of participants are given plenty of contact information. My normal breathing started to return and I thought maybe I won't need those daily therapy appointments after all.

It was quickly becoming apparent to me that Joey would be far safer in Israel than I am in Los Angeles. If I had half that amount of protection here, I'd sleep better at night. Joey's back now, so I am sleeping better. 17,000 participants visited Israel during the Winter break with Joey, from 20 different countries. He said he had an amazing time, that it was the most beautiful place he'd ever seen, and can't wait to return. He took many wonderful photos and brought me back some lovely gifts. So, while I may not have been to Israel myself, at least I now own things that have. Hey, it's a start. I hope to visit Israel some day soon, too. Maybe even with Joey – that is, unless I hear back from my college paper to see if they want me to make a second go around as their movie/restaurant critic.

The way I look at it, if I'm strong enough to make it through my son's visit there, I should be strong enough to visit Israel on my own. And then, who knows? One day I may even become as brave and worldly as my son. ‘Til then, it's good to have a role model.

A Letter to My Soul Mate
The Promise Of The Land
Which Chat Are You On?: Parshas Behar/Lag Ba’Omer
Do You Like Slow-Cooked Food? Thank the Jews
Comments
MOST POPULAR IN Cool Stuff
Our privacy policy