2102 News from Israel You May Have Missed 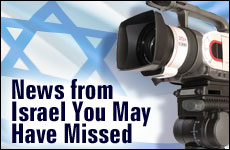 2012 was a busy news year. Here are some less-reported stories you might have missed.

In Israel, rain is regarded as a blessing. In that case, 2012 started off on a wonderful note, with January 2012 breaking all-time Israeli record with 29 days of precipitation.

“Eye from Zion” marked its one-thousandth operation – saving the sight of 1,000 people around the world in the previous six months. The charity, partly funded by the Israeli government, sends leading Israeli doctors to poor countries where they set up temporary, mobile clinics. Founder Nati Marcus said: “We see ourselves as the goodwill ambassadors of Israel and the Jewish people.”

The Organization for Economic Cooperation and Development ranked Israel as the second-most educated country in the world. 92% of Israelis graduate from high school, and 46% have a post-high-school degree. 2012 also saw the beginning of free preschool in Israel. 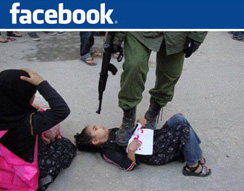 A malicious photo went viral on Facebook, purporting to depict an Israeli soldier pointing his gun at a young girl. The photo was removed after it was pointed out that neither the gun nor the uniform in the photo were those issued by the Israeli army, and the picture was likely shot during protests in Bahrain.

The killers of the Fogel family, murdered in their beds back in March 2011, were praised on official Palestinian TV; one was described by his aunt as “a hero and a legend.”

“For My Next Illusion I will Use Wings,” a collection of short stories by award-winning Israeli author Alex Epstein, became the first book ever “published” entirely on Facebook. Epstein explained that the format gave him a chance to connect with new readers and create a dynamic relationship with his many fans.

Israeli scientists found that starting the day with chocolate cake was ideal. Prof. Daniela Jakubowicz of the Wolfson Medical Center in Holon compared high-calorie chocolaty breakfasts with low-calorie options. Obese patients eating 600 calories of chocolate cake as part of a balanced died lost an average of 33 lbs. after 16 weeks; patients who ate a chocolate-less 300 calorie breakfast gained weight instead.

Scientists at Ben Gurion University of the Negev startled the world by announcing that plants can talk! Pea plants which were deprived of water sent transmissions via their roots to nearby pea plants, which then copied their stressed neighbors and likewise prepared for drought. 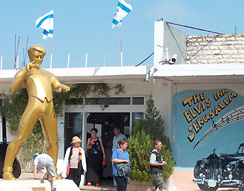 The “Photoshop Law” went into effect in Israel, banning the use of underweight models in advertising. The law also mandates that magazines disclose which photos have been digitally manipulated.

Business Week reported that Israel Theme Tours has launched full-package Elvis-themed tours of Israel. The tour features backup singers who toured with the King, Elvis impersonators, and takes in Elvis-themed sites in the Holy Land, as well.

Israel’s Ezer Mizion Bone Registry celebrated saving 1,000 lives since its founding. The registry has expanded thanks in part to the Israeli Defense Forces, which gives every Israeli soldier the option of giving a blood sample to become a potential bone marrow donor.

Naim Araidi, a Druze Muslim citizen of Israel, was appointed Israeli envoy to New Zealand. Araidi, an acclaimed Israeli poet, teaches Hebrew Literature at both Haifa and Bar-Ilan Universities; he won the Prime Minister’s Award for Hebrew Literature in 2008. Araidi said: “After years of representing Israel unofficially, it would be a great privilege for me to do so in an official capacity and show Israel’s beautiful side, as well as the co-existence that, despite all the hardships, can only be maintained in a true democracy.”

As the top official in Hamas, Ismail Haniyeh, sends rockets into civilian centers in Israel and is dedicated to the Jewish state’s destruction. But this month, his brother-in-law, accompanied by Haniyeh’s sister, traveled to Israel to undergo emergency treatment for a heart condition in Beilinson Hospital in Petach Tikva.

Psychologist Tal Ben Shahar, Harvard’s most popular professor, returned home to live in Israel. The professor, who became best known for his class on positive psychology, decided he’d be happiest back home in the Jewish State, one of the world’s happiest countries, according to international rankings.

Interpol’s annual international crime-fighting convention, held in Tel Aviv, focused in part on cyber-crime, an area which Interpol Secretary-General Ronald Noble said, “The Israeli Police have an extraordinary reputation, worldwide, for being able to investigate, fight it, prevent it, from a crime perspective, a fraud perspective and also from a security perspective.”

At age 24, Israeli mountain climber Nadav ben Yehuda was set to become the youngest Israeli ever to scale Everest. But he gave up his own conquest when, just 300 meters from the summit, he spotted the unconscious body of another climber, Aydin Irmak, of Turkey. “Other climbers jut passed him by and didn’t lift a finger, but I had no second thoughts. I knew that I had to save him,” said ben Yehuda, who carried the unconscious climber down the mountain.

Gilad Shalit, the Israeli soldier held by Hamas for five years with no contact with the outside world, was hired by Yediot Aharonot to be their basketball correspondent.

Dr. Daniel Hillel, whose micro-irrigation techniques revolutionized food production first in Israel and then throughout the world, won the World Food Prize, the foremost award recognizing those who have increased the quality, quantity or availability of food in the world. Acting sensation David Arquette celebrated his bar mitzvah at Jerusalem’s Western Wall. The Scream star was attending a Bar Mitzvah when he was invited to have his own. Rabbi Shmuel Rabinowitz, the official rabbi of the Western Wall, officiated.

A group of Jewish Russian philanthropists donated $1 million for Israel’s newest award, the Genesis Prize, which recognizes excellence in a variety of fields, honoring those who ascribe their success to Jewish principles.

Eric Schmidt, Google’s CEO, praised Israel as the world’s leader of innovation and a “tech miracle” – describing Google’s Israeli innovation centers as the company’s most prized, which Google is constantly expanding.

Israeli scientists developed a marijuana that has all of that drug’s anti-pain properties, but without the high-inducing chemicals that make cannabis so contentious.

The stunning remains of a magnificent Roman-era synagogue were uncovered in Huqoq. The synagogue features preserved mosaics, including biblical scenes and inscriptions.

A planned UN-sponsored concert in Jerusalem by Daniel Barenboim’s “East West Orchestra,” which brings together Jews and Muslims to perform together, was cancelled after anti-Israel protestors complained that having both Jews and Muslims in the orchestra implied too much “balance” between the two groups.

Mohammed Morsi, Egypt’s new President, sent a warm letter of introduction to Israeli President Shimon Peres – and then strenuously denied ever making such a statesman-like overture to the Jewish state, claiming his initial letter was a hoax.

A researcher in Israel was able to control a robot in France, simply by thinking about it. Student Tirosh Shapira was hooked up to a computer which sent his brain waves to the robot in France, which he then directed to walk around the room, and seek out people and objects.

Israel tested a new missile alert system whereby messages in Hebrew, Arabic, English and Russian were sent to every mobile phone in the country. In the event of an actual attack, the messages could warn residents of incoming missiles.

Israel increased its ranking in the annual Academic Ranking of World Universities list. Hebrew University, the Technion, Weitzman Institute, Tel Aviv University, Bar Ilan University, and Ben Gurion University of the Negev all made the list of the world’s top spots.

Israeli pilot Noam Gershony, who was critically injured during 2006 fighting in Lebanon, won the gold medal in wheelchair tennis at the Paralympics in London.

Hamas stopped sending mortars into Israel for 48 hours so Israeli workers could lay high speed internet cables into Gaza, to replace the slower dial-up service that previously served the area. “This is Israel’s answer to the hundreds of mortars, to connect the people in Gaza to the world,” said Maj. Adam Avidam, who coordinates security for Israel in the area. 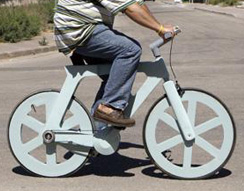 A “Tolerance Walk” in Bethlehem had to be cancelled after participants objected to the presence of Israelis taking part.

Amateur Israeli cyclist Izhar Gafni developed a working bicycle made almost entirely of cardboard. He estimates the bike will retail around the world for about $20.

Operation Dove’s Wings began, bringing the remaining Jews in Ethiopia to Israel. The operation will take approximately one year, considerably longer than the two days in 1991, when over 14,000 Ethiopian Jews were airlifted to Israel.

Lonely Planet named the Negev as the second best travel destination in the world. (Corsica in France came in first.) The travel company described the region as a “giant greenhouse of development. Think eco-villages, spa resorts and even wineries.” 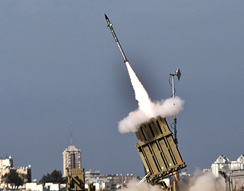 A study found that 88% of Palestinians support “violent struggle” against Israel, with a minority wanting to resume peace negotiations. By contrast, 71% of Israelis favor peace negotiations, even though many – 67% – feel they won’t ultimately be effective.

Coming full circle, this year is shaping up to be the “rainiest winter” in the past 20 years, raising the Sea of Galilee to near-record levels.

Why the Left Should Love the Jewish State, Again

Hung Up on Israel

"Lightly Injured"
What Makes Eli Run?
The Tyranny of Materialism
Science Enters the Mysterious Inner World of Consciousness
Comments
MOST POPULAR IN Israel
Our privacy policy