New Year’s Resolutions for the Media 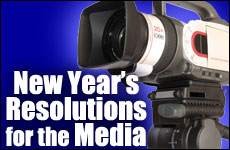 13 suggestions for stopping media bias in the Arab-Israeli conflict.

Gaza is not occupied, not a “prison camp” and the people are allowed to fish. The Palestinians in Gaza rank above-average in the Arab world by all indicators: health care, immunizations, education, nutrition, longevity, and low childhood mortality.

Israel withdrew every last soldier, civilian and interred body from Gaza in 2005, the Israeli naval blockade of Gaza is legal and Israel does not control all of Gaza’s borders – Gaza has a border with Egypt which Egypt controls. Hamas rules the Gaza Strip and responsibility for any suffering on the part of its residents lies primarily with the terrorist organization.

Since succeeding Yasser Arafat as Palestinian Authority president and leader of Fatah, Mahmoud Abbas almost invariably has been described as a “moderate.” This, despite the fact that Abbas, Arafat and a few colleagues founded Fatah in 1959 to “liberate” Israel – not the West Bank (then occupied by Jordan) or the Gaza Strip (then held by Egypt).

The Department of Defense definition recognizes that terrorism is a crime: “The calculated use of unlawful violence or threat of unlawful violence to inculcate fear, intended to coerce or intimidate governments or societies in the pursuit of goals that are generally political, religious or ideological.”

“Militant,” on the other hand, is undefined by American law and its consensus usage journalistically – militant unionist, militant environmentalist, militant vegetarian – is as an adjective. It suggests vehemence and persistence but not illegal violence. Farmers farm, lawyers practice law, and terrorists commit terrorism – they don’t advocate causes.

4. Report accurately on the security barrier.

The Israeli security fence is a nonviolent way to reduce terrorism and it has been extremely effective in saving lives – both Jewish and non-Jewish. It was constructed in response to the second “intifada” and has significantly reduced terror attacks originating from the West Bank. It does not “completely surround Bethlehem,” it is not “a wall” nor an “iron curtain.” Furthermore, there are security and separation barriers all over the world that get no criticism – or coverage – whatsoever.

5. Report that it is the Palestinian Arabs – not Israel – who refuse to negotiate peace.

While Israel has repeatedly invited Palestinian leaders to return to the negotiating table for peace talks, Palestinian have insisted they won't do so unless Israel first satisfies their preconditions. Even after Israel in 2009 announced a 10-month moratorium on new settlement construction, Mahmoud Abbas avoided talks until just weeks before the moratorium was set to expire. And when the moratorium did expire, he again spurned negotiations.

6. Report on the incitement to hatred of in Palestinian media.

Major media have failed over many years to report accurately, consistently and with due prominence, the pervasive and genocidal rhetoric against Israel and the Jewish people. Blood libel, the false accusation that Jews murder children, is a favorite theme of Arab media, used as the story line for comedy sketches and dramatic programming. Palestinian Media Watch has documented numerous instances of Palestinian Authority dehumanization and vilification of Jews and Israelis.

Does this incitement have any effect? According to Abdelghani Merah, his brother perpetrated the Toulouse massacre early last year because he was exposed to “hatred, racism and anti-Semitism.”

7. Report on the Jewish refugees from Arab lands.

The media report frequently about Palestinian refugees, but of the 850,000 Jews living in Arab countries who were dispossessed and forced out between 1947 and 1972, almost nothing is said. Ancient Jewish communities had existed in Arab countries for millennia until the Arab League defined all Jews as enemies of the state in 1947. State-sanctioned violence, arbitrary arrests, and forced expulsions followed. Arab governments confiscated billions of dollars of Jewish property. The total area of land seized from these Jews is five times the size of the state of Israel. Yet few major media outlets cover the issue.

8. Shed the false narrative that the Israeli-Palestinian conflict is at the heart of all the problems in the Middle East.

The phrases “the Middle East conflict” and “the Middle East peace process,” as applied to Israeli-Palestinian affairs, has always been more an exaggeration than a synonym. The Iran-Iraq war and Algerian civil war are examples of inter-Arab bloodshed that dwarfs the Israeli-Palestinian conflict. Others include the Lebanese civil wars from 1975 to 1990, with hundreds of thousands of casualties, and Syria's annihilation of the Muslim Brotherhood in Hama in 1982, with an estimated 10,000-40,000 fatalities.

Today, a bloody civil war rages in Syria with over 60,000 dead and tens of thousands more wounded. Of course, the “Arab Spring” demonstrated clearly that turmoil in the Middle East frequently has nothing whatever to do with Israel.

9. Report on the suffering of women, homosexuals, and religious and ethnic minorities in Arab and Muslim countries.

Women's rights are grossly constrained in Arab countries, where so-called “honor killings” are still common and largely unpunished. Gay Iranians, if caught, face execution. Gays in Saudi Arabia, if arrested, face, at best, flogging or imprisonment. In Gaza, homosexual acts are illegal and punishable by up to 10 years in prison.

Palestinian Christians, like other religious and ethnic minorities in the Middle East, are the target of mistreatment, harassment and in some instances, violent oppression at the hands of their Muslim neighbors.

10. Report that both the Hamas charter and Fatah constitution call for the destruction of Israel.

The Hamas charter calls for Jihad against Israel and dismisses any political solution. “Israel will exist, and will continue to exist, until Islam abolishes it,” reads an introductory quote on the document. It also asserts genocidally that that Hamas’ battle with the Jews extends beyond Israel.

The constitution of the Fatah movement also calls for the “complete liberation of Palestine, and eradication of Zionist economic, political, military and cultural existence” through violence, and similarly dismisses political solutions.

11. Stop suggesting that Israel’s democracy is under threat.

At this very moment, the Syrian regime is murdering its own citizens. Lebanon is run by a terrorist group, Hezbollah. Jordan is an absolute monarchy that recently revoked the citizenship of thousands of residents of Palestinian descent. Gaza is run by Hamas, a terrorist group that hasn’t had elections in years. And the West Bank is run by a corrupt kleptocracy whose term also expired years ago and continues to hold office illegally. These governments are truly embattled and their citizens suffer, yet Israel’s internal politics attracts the lion's share of media scrutiny and, usually, criticism.

If the media were not obsessed with hectoring Israel, imagine the column-inches and airtime that could be freed up for coverage of... the Chinese occupation of Tibet, the continued imprisonment of Christians in Iran, deadly Turkish attacks on the Kurds, police brutality throughout the Arab Middle East, the plight of Liberian, Angolan, Congolese, Ivorian and other refugees. Not to mention world-leading breakthroughs in medicine, agriculture, communications, micro-technology and other fields by Israelis and others around the globe.

13. Follow the Society of Professional Journalists’ Code of Ethics.

From the preamble: “Members of the Society of Professional Journalists believe that public enlightenment is the forerunner of justice and the foundation of democracy. The duty of the journalist is to further those ends by seeking truth and providing a fair and comprehensive account of events and issues.” Just a reminder.

An Open Letter to Jimmy Carter

Media Critique #40: Critique of the Washington Post
How I Learned to Love the Multiverse
10 Big Jewish Inventions
A Journey through Jewish Sicily
Comments