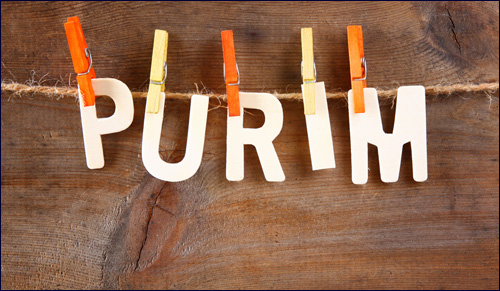 Brush up on the following new Purim vocabulary because you never know when there might be a “poppy” quiz!

Grogger Hogger: Proper Noun – When you show up for the Megillah reading and all that’s left are some paltry New Year’s Eve hornblowers, the Grogger Hogger is to blame!

MegillahDrilla: Noun – “Alright now, you know the MegillahDrilla,” the Rabbi says as congregants file into shul to hear the reading the whole Megillah.

BoooooBallyhoo!: Noun – The cacophony of sound when children’s booing at the mention of Haman reaches a Tylenol crescendo.

A Filler Thriller: Noun – Someone who takes great pride experimenting with putting new flavors inside their hamantaschen. Nutella anyone? “She sure makes a killing by chilling her thrilling filling.” Can be quite the “fulfilling” career!

Fastivus For the Rest Of Us!: Exclamation – Seinfeldian phrase used to justify why some Jews needn’t participate in the important Fast of Esther, citing a prior famishment on Yom Kippur.

Esther Investor Impresser Dress Her: Verb – One who shells out lots of dough (but not for hamantaschen) on an authentic royal outfit so their daughter will win the Purim Carnival Contest. The antithesis of…

Esther Protestor: Verb – Vehemently opposing the notion that a female’s only costume option on Purim is to dress up as the Queen. Warning: Can lead to the following…

CrownGownLetDown: Noun – Serious syndrome with symptoms striking a young girl who looks forward all year to wearing frills and jewels, only to realize she is the daughter of a women’s libber.

Mollifying Mordechai-ing Modifying: Verb – The act of placating anyone who changes his or her mind and states this hero was actually Esther’s Uncle when you’re quite certain he was her cousin. Or vice-versa. Note: It’s never okay to Mordechai Mortify someone for his or her ignorance.

P.O.P: Acronym – (Purim Opposition Punim) The guaranteed right to decline to have your face painted at a Purim Carnival.

Bossy Boogyman Booth Boychicks: Proper Noun – Scary, mean fathers (coerced into running Purim carnival game booths by their volunteer wives) who act like the mafia so they won’t be invited back next year.

Shpiel Appeal: Adj. – A flair for comedy or drama. “Hey, he has real shpiel appeal – let’s cast him in this year’s Purim Play!”

M.O.M.M.Y: Acronym – (Mishmash Of Mishloach Manot Yummies) A current trend to put a hodgepodge of elaborate gourmet food items inside the gift baskets we bestow on the Jewish community. “It was a true act of M.O.M.M.Y when we found an entire rack of lamb, a spinach salad, plus mashed potatoes with pareve sour cream underneath the traditional dried fruit and nuts!”

EsthernotEaster!: Exclamation – When non-Jews see the above baskets of treats, they make faulty assumptions about chocolate bunnies, marshmallow chicks, and cellophane grass. Shouting this phrase will quickly set them straight!

Masquerade Parade Charade: Verb – Marching enthusiastically around in all sorts of Purim get-ups to prove to your child this Jewish holiday is far superior to Halloween.

Pockets and Ears and Hats…Oh My!: Exclamation – Chanted like Dorothy, it’s a fun way to espouse the different theories of why hamantaschen are shaped like 3-cornered triangles. You do know which one is correct, right?

Charity Clarity Care-ity: Adverb – Having a clear understanding that donating to the poor is an extremely important part of Purim.