Never Too Old to Learn 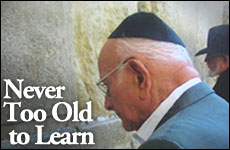 My grandfather started learning Torah when he was 80 years old.

I recently graduated from university. It is a major identity change. Going from student to graduate out of college is a major step in life. I thought how I got here. My parents, teachers, friends, rabbis, and then one person really popped out -- my grandfather, may his memory be a blessing, William Bernard Clayman. 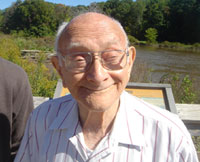 On October 16th, 2006, at the age of almost 82, my grandfather passed away. Saba used to always dress impeccably, was on time to everything, and considered one of the greatest duties in life to be responsible in everything you do. He grew up in the small town of Nile,Ohio, one of four Jewish children in his entire school system. He liked to tell the story why he was born in Youngstown, Ohio, some 20 minutes away from Niles. The Klu Klux Klan had their largest rally in the area on November 3 and his mother was staying with her family outside of Niles. This is just one of many childhood events that began to forge an breakable connection with Judaism.

He grew up with a minimal Jewish education in a third generation American family. He was a boy scout, worked in his father's scrap yard during the summer, and was an altogether normal Depression-era lower-middle class all-American boy. He went to Oberlin College to become a history professor. Almost any conversation with him would include either a quote of Shakespeare, a Roman battle, or Colonial American history.

Saba was also plagued by depression his entire life. After a year at Oberlin, he came back home due to his illness. My great-grandfather, Morris Clayman, gave him a pick-up truck and told him to start buying and selling scrap metal. Saba told me that saved him life, the feeling of accomplishment by earning an honest living kept him going throughout even the worst periods of manic depression.

At the age of 28, he got married to my grandmother, Hilda Fish, may she live until 120. They had four sons, Gary, David, Joel (my father), and Michael. David inherited the same mental illness and died at the young age of 19. The shocking event did not stop my grandparents or make them bitter, it inspired them to help others.

This is the necessary background to the real story...

Rabbi Noach Weinberg, may his memory be a blessing, was fond of telling the story of Rebbe Akiva and how he only started learning Torah when he was 40 years old. He was a very successful businessman, running the operation of his future father-in-law's herds which were the greatest in all of Israel. He believed anyone could come and learn about Judaism regardless of their age or background. My grandfather was 80 years old before he set foot into a yeshiva to learn.

Starting from an early age, against his parents political views, he became an ardent Zionist and later a supporter of all kinds of Jewish-oriented projects from arts and cultural of Jewish life to Israeli scientific research to investment in emerging Israeli companies. His home, a modest place where he did not move from for 50 years, was literally overflowing with books on Israel, Jewish culture, and history. When I was 15, I asked him what made him care so much about a country so far away? He answered me with a dead serious tone, staring me straight in the eye, "I'm a Jew and I'm a romantic. I believe in the Jewish people."

Rabbi Noach Weinberg would ask me every time I'd come to Israel how my grandparents were and he would send them his best regards. My grandfather understood Rabbi Weinberg's mission -- to invigorate the Jewish people to reach their potential – and stood behind it.

My grandfather and parents suggested I go to Aish HaTorah right after I turned 17 for the summer. I came back from the three-week Essentials program with a greater commitment to Judaism and the Jewish people. My grandfather was excited and wanted to talk of nothing but Israel and learning in yeshiva. With God's loving kindness, I was blessed with approval to attend Aish HaTorah's Intermediate Program the following year. My grandparents, both aged 80, not able to walk so well, with no family in Israel other than me, decided that it was their turn to delight in their heritage and learn more about Judaism.

Realizing you're never too old to learn, he called Baruch Rabinowitz of Aish HaTorah, asking for his help to arrange a stay in Israel to learn in yeshiva and spend the High Holidays there. They arrived soon after me, and the very next day, my grandfather was the oldest yeshiva student while I was the youngest, learning side-by-side. He told me it was the greatest trip of his life, the fulfillment of dreams and aspirations. His learning partners all said he was very bright; he was one of the first students in yeshiva to learn every day.

He was there for the month of Elul, Rosh Hashana, and Yom Kippur. During Chol HaMoed Sukkot, my parents and younger sister came to Israel and we celebrated her Bat Mitzvah in Jerusalem. Saba got sick during Sukkot and came back after the holiday to America for tests. He wanted to almost exclusively reminisce about his time at Aish HaTorah and his love of being in yeshiva in Israel. He died exactly a year after his return on the 25th of Tishrei.

He never got to graduate university or spend more time in yeshiva, but when I walked down the aisle to accept my degree, he was there with me. And later that day, when I finish the sixth and final section of Mishnah at my graduation party/Siyum HaShas, it was in his merit and honor.

Ben Clayman is a student of Yeshivas Aish HaTorah. Whenever he is psychically not in Jerusalem, he is still always trying to get back to Yeshiva. He graduated from the University of Chicago and is now travelling, training for a marathon which his rabbis at Aish inspired him to do, and working at a start-up company, His online digest/blog is AkivaSociety.com.

Ben Clayman is a student of Yeshivas Aish HaTorah. Whenever he is psychically not in Jerusalem, he is still always trying to get back to Yeshiva. He graduated from the University of Chicago and is now travelling, training for a marathon which his rabbis at Aish inspired him to do, and working at a start-up company, His online digest/blog is AkivaSociety.com.

In the Heart of Jerusalem

In Praise of Abnormality