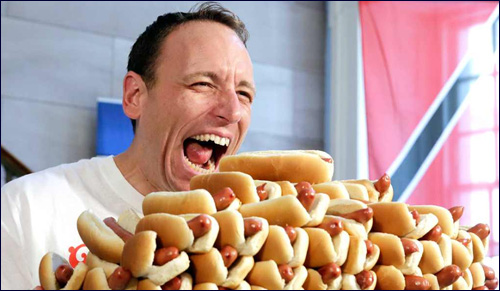 When I heard about Nathan’s contest, I knew I had found my sport.

It was right before I moved to Israel, that I had the honor of competing in the Nathan’s Hot Dog Eating Contest. Known to many as the Super Bowl of eating, I always wanted to be a professional athlete. The one thing holding me back was my athletic abilities. Then I heard about Nathan’s contest, and I knew I had found my sport.

It was around fifteen years ago when the only kosher Nathan’s at the time was in Los Angeles, so I flew in and competed in the Nathan’s Hot Dog Eating Contest. The competitor I am, I showed up ready to eat.

They didn’t just take anybody. It was a serious competition, and I had to pass the weigh in. At the time, I was well over 200 pounds and I was able to fit into an XXL shirt with no problem. I was accepted. They were worried, as I was 40 pounds lighter than the closest competitor. This is a story of David and Goliath.

I was competing against bigger men, but I have taken down bigger men before on the way to the cholent at Shabbat Kiddush. Nothing was going to get in my way. I claimed my spot at the table, planted my feet and did not move; the same way I had done so many times while other famished people were trying to get to the herring after Shabbat services.

I went up against Ray ‘The Bison’ Meduna. A man ranked as the number 12 eater in the world, due to his powerful jaws and lungs; even as an amateur, he claimed fame as the Texas State Kolache Sweet Dough Eating Champion. Going up against ‘The Bison,’ I had to use tact. I tried psyching him out. I went up to his face and said, “I am David ‘The Mensch’ Kilimnick and I eat hot dogs with a fork, because I am a mensch. He was not fazed. ‘The Bison’ wasn’t competing for a place in heaven and he didn’t know Yiddish. He told me that he drank gallons of water the night before, just to extend his belly. I knew I was dealing with a superhuman. I can’t even drink a cup before I go to sleep.

Doing it for the Children

Whenever eating as much as you can, you have to think about who you are doing it for. Me? I do it for the children, the two Yeshiva boys who came out to see what eating is like when your parents aren’t around.

After trash talking the competition, Jewish Style, I was neck and neck with Ray ‘The Bison’ Meduna on the first four hotdogs. I could see Jewish pride on the two Yeshiva boys’ faces; reminiscent of Jews watching Sandy Koufax play baseball for the LA Dodgers in the 1960s. The resemblance was uncanny. I saw a future of young Jewish boys, full of newfound inspiration, thinking they too could be a food athlete and eat like a mensch; knowing they too could fulfil their athletic dreams of saturated fats.

‘The Bison’ and I were neck and neck. As the Yeshiva boys and crowd were cheering ‘Mensch! Mensch!’ Four hotdogs against four hotdogs, the first minute down, and then he kept on eating. Ray must’ve been trying to prove something. That was too much already. I was full. I needed a little schnapps.

It Was Rigged Against Jews

There is no place for a religious Jew in an eating competition. They said, “On your marks, get set, go.” I turned to the announcer as he said the word ‘go’ and asked, “Where is the washing station?” I had to do nitilat yadaim (pre-meal hand washing). The competition included bread. What was I to do? Wash and eat a little bread beforehand? Filling up on carbs, before the competition?

If You Compete, You Are A Winner

Eating is about competition. As seen at Kiddush, only the strong survive. It was probably the way I scarfed down those first four dogs in record time, after I washed, to catch up to the competition. They also stopped me from using my elbows, used for keeping the other competitors away from the food; a technique developed at Kiddush. At the end of the eight minutes, I had taken down a good nine hotdogs. I was a winner, after all, it was a decent lunch.

The competition didn’t include mayonnaise and chili, but I requested the toppings. If I was there already, I was going to get the works. They said that it was the first time on American soil that anybody packed up the food and asked for a to go bag at the Nathan’s Contest.

I am a Hero if that is the Ending

Did I ruin a couple of Yeshiva boys’ dreams, skipping class that day? I might have. But maybe today they are rabbis, out there telling their students about a great Jewish legend who competed in the hardest of circumstances and washed his hands, like Sandy Koufax. Maybe they are playing baseball. Maybe they are bowling. Whatever they are doing, the story of inspiration lives on with those two kids who flunked out of Yeshiva. One thing is for sure. Whatever they are doing, they will never let being overweight get in the way.

David ‘The Mensch’ lost the battle to ‘The Bison’ that day. If my opponent had been Goliath, I might have won. Nothing in the Bible says that Goliath was able to eat 35 dogs in one sitting, in eight minutes, with buns.

The Jewish Grinch
Morality and Abortion: Three Views
There Are No Limits
Adam and Eve Were Vegan
Comments