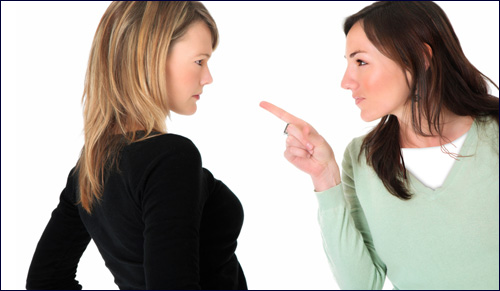 Aloof and rude, I think my self-respect demands that I distance myself from my husband’s sister.

I have tried and tried to be close to my sister-in-law but she just won’t let me. She is just constantly rude and nasty. On top of that, I’m the one that takes my mother-in-law to all her doctor’s appointments and even to the hairdresser, so if anyone has a right to be resentful it’s me not her! I know it’s painful for my husband (her brother) but I’ve had enough. I think my self-respect demands that I distance myself from her and not put up with her rudeness and criticism anymore. Do you agree?

I certainly understand how you feel. There is no excuse for rude behavior, especially under these circumstances. Perhaps there is some reason that your sister-in-law can’t be there for her own mother and she is resentful that you, her daughter-in-law and not her biological daughter, can. Her feelings of inadequacy and guilt may express themselves as nastiness and rudeness. This is a possible explanation but, as mentioned, not an excuse. It may just help if you have some compassion for her.

Beyond that, you are NOT responsible for her behavior, only your own. You have to continue to behave in a way that you are proud of. You need to look at the long term. What is the kind of person you want to be and what is the best outcome for you? Is that kind of person achieved through responding with equal nastiness to your sister-in-law, through ignoring her or through continuing to reach out? (Or none of the above!)

I think we could all agree that equal nastiness or ignoring her are not solutions we would be proud of. On the other hand, I don’t think you have to continue to open yourself up to her critical behavior. I think you could say something like, “I would really like us to have a better relationship but this type of conversation is abusive and unacceptable and I am hanging up the phone or walking away (or whatever is appropriate to the situation).” This allows you to stand firm against this behavior without lowering yourself to her level. It’s possible that once she’s forced to face this behavior and no longer allowed to get away with it, she will actually change. Even if she doesn’t, you have taken a stand and preserved your dignity and still left open the option of a future improved relationship. The ball will now be in her court.

My three-year-old daughter is very precocious. She understands everything and has a large vocabulary. It is actually a lot of fun to talk to her. She is also very pretty and even a little coquettish. She is very aware of her own abilities and charms and can be a little manipulative. She knows how to smile and get away with things and sometimes her “cute” behavior borders on chutzpah. I don’t want to dampen her spirit and she makes me laugh but I get nervous when I think of her as a teenager. Is there anything you think I should do now to ward off a really awful adolescence?

While hormones will be hormones and there is nothing you nor I nor anyone else can do to stop it, I do believe there is action that you can and should take immediately. I feel strongly that there should be a zero tolerance policy for chutzpah. It is one of my (very) few hard lines.

This has nothing to do with my honor – or yours – but with our children’s character. What is adorable and oh-so-clever in a three year-old is rude and obnoxious a few years later. We don’t want to set a precedent of permissible talking back to parents or teachers or any other authority figures. Because our children need to respect authority figures, because learning to subject ourselves to a “higher authority” is an essential part of character development. Not only is it a practical tool for life but it teaches us about what it means to have a relationship with the Almighty.

Children and adults are NOT equals and we should not encourage that perception. I can’t repeat often enough that the goal of parenting is to help raise successful adults and not to have the cutest or wittiest or best-dressed 6-year-old! To that end, we sometimes need to put our foot down and take a stand against chutzpah or meanness or other unacceptable behaviors. It will be a greater kindness to your daughter.

My daughter turned 10 a few months ago and had a big birthday party with the whole class invited. Now one of her friends is having a party with a smaller group and she didn’t invite my daughter. Did I mention that she lives around the corner and we frequently carpool together to school? I can’t believe how insensitive these parents are and I’m ready to march around the corner and give them a piece of my mind. My daughter is begging me to stay out of it. Who is right?

As frustrating and painful as it is, I believe your daughter is correct here. Around the age of 10, during fifth grade, some switch seems to turn on in young girls that brings out a lot of meanness and a lot of possessiveness. It is the age where friendships need to be exclusive and where the competition for a best friend is intense.

I remember a number of my daughters coming home from school crying at that age. I only once made the mistake of trying to intervene. It was very unsuccessful and, despite what I thought was my tactful and diplomatic approach, only provoked the wrath of the other parent. Like I suggested here, it is actually better for them if we don’t. We can certainly express empathy and understanding but, as we adults know all too well, these types of behaviors are not limited to 10 year-old girls. These types of occurrences will happen throughout your daughter’s life and what she needs is a coping strategy, not a mother at war.

She needs to feel your love and the stability and safety of your home despite what goes on out there. She needs to learn how to value herself whether she gets the “right” invitations or not or moves with the “in” circle or not. You need to help her develop a sense of self-worth that is based on character, on effort and on internals and not on externals such as her physical appearance, her material possessions and her supposed popularity. This is the job of all parents, whether their children are invited to the birthday party or not. But sometimes it takes external circumstances to provoke us to reflect on these issues and to have those important conversations. The lack of invitation to this party could be a gift in disguise for both you and your daughter. It’s up to you to use it wisely.

My Husband’s Idiosyncrasies are Driving Me Nuts

Caught in the Middle of My Fighting Parents