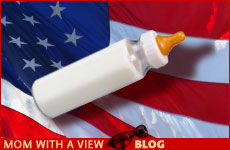 Do you want the government involved in your parenting?

MSNBC host Melissa Harris-Perry says your children are not yours – they are owned by the community. “We have to break through our private idea that kids belong to their parents or kids belong to their families,” says the professor of political science at Tulane University, where she is founding director of the Anna Julia Cooper Project on Gender, Race, and Politics in the South. Kids belong to whole communities, she insists, and once we realize this we’ll make “better investments” in them. Ms. Harris-Perry believes that children are our communal responsibility and not the responsibility of their parents and families, that they “belong” to the whole society.

As Dennis Prager always says, “You have to be very highly educated to come up with ideas so divorced from reality.”

Actually, our children don’t “belong” to anyone. They are a gift to us, on loan from our Creator and our job is to help them become successful, moral, giving adults.

While it’s true that we want society to take seriously the needs of families and children and for the government to allocate its resources with that in mind, we certainly don’t want control taken out of the parents hands and placed in those of the government.

What’s troubling about Ms. Harris-Perry’s attitude is that it seems to take the humanity out of child-raising. Children are not machines or corporations or countries. They are complex human beings whose most basic needs of love and security could certainly not be satisfied by the government. (It seems absurd to have to say it.)

Perhaps the author has never heard of the early kibbutzim. A number of them embraced this theory, although certainly in a smaller environment. The children were raised in the children’s houses and not with their parents. They “belonged to the collective” just like in Melissa’s vision. Needless to say, it didn’t last. Even within the relatively homogenous setting of the kibbutz and even within the small community, it didn’t work. For two reasons – it was harmful to the children and it went against human instinct (the same reason that socialism will never actually work however wonderful it may sound in theory, and another way in which the subsequent collapse of kibbutzim have demonstrated the fallacy of this idea).

Would we really put something so precious in state hands?

What’s troubling is that the idea has any traction, that anyone would continue to suggest it. I don’t know if this television host has any children. I assume not since I can’t believe she would advocate such a preposterous concept once she has held her own child in her arms.

And even, if as some say, her words have been distorted and all she meant was that the government should be more involved in child-raising, her idea is disturbing. Whenever government control over any aspect of our lives is advocated, someone always raises the specter of the disastrously-run United States postal system. Would we really put something so precious in state hands?

But beyond that, I think that while it is certainly wonderful to live in a community and to turn to neighbors for help when necessary, all the clamoring for government assistance in child care, child raising, flexible work hours, work-life balance and on and on is symptomatic of an unwillingness to take responsibility for ones own life and to accept the consequences of our choices.

We’re back to the “you can’t have it all” argument which just won’t go away. I’m certainly an advocate for having children (if you catch me on the right day!) and I believe that there is nothing more valuable you can do with your life. But I also believe that, like every other choice we make, it has consequences. It opens up certain options and it closes off others.

And no one wants to accept that. When you get married, that ends (or should end) your ability to have an intimate relationship with any other members of the opposite sex. Some may find that restrictive. It is a price we are generally willing to pay in order to reap the benefits of marriage. But it certainly shuts some doors.

If you sign a business contract with a corporation or a sports team or commit to a certain movie or television show, you have shut some doors. You have curtailed your options. That is the reality of life.

I shudder to think what would happen were Ms. Harris-Perry’s ideas to be embraced. But I’m not really worried that they will. The parent-child bond is so strong and so primal that few of us would ever give it over to anyone else whatever the pundits may say.

Warmth on the Glacier
The Promise Of The Land
Which Chat Are You On?: Parshas Behar/Lag Ba’Omer
Do You Like Slow-Cooked Food? Thank the Jews
Comments