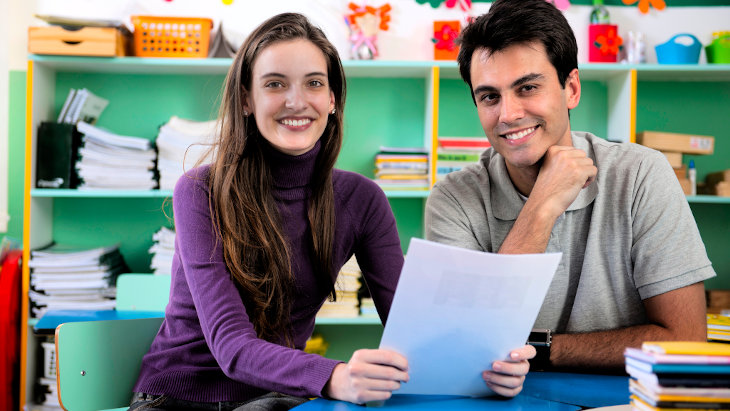 Everyone knows what nachas is – that particular joy that leads to kvelling that we experience when our children exhibit exemplary behavior. (It’s even greater nachas when someone outside the family notices it!) They are the moments that seem to make all the drudgery, all the exhaustion, all the effort worthwhile. And sometimes, they are few and far between.

Especially when it comes to their schooling. Which is why I was particularly moved when I heard that one of my grandchildren’s teachers calls the night of parent-teacher conferences “nachas night.”

What a difference a word can make! While I certainly remember some parent-teacher conferences that were a source of nachas, I have much more vivid recollections of the ones that weren’t! The words of the teachers who didn’t understand my child (and often made no effort to), the teachers who began and ended with only criticism of my child, the teachers who couldn’t even be bothered to notice my child – these are the experiences that lasted – probably for my kids too even though they weren’t there!

I used to hate parent-teacher conferences, dreading the night, unsure of what kind of experience we would have and how best to guard myself against the wave of accompanying discouragement.

What a different night it would have been had the evening been named nachas night! How my anticipation of the experience would have changed. And I assume that of the teachers as well.

It’s not that I think there shouldn’t be an honest evaluation of the child – their strengths and weaknesses. I just believe that if the focus is on nachas rather than criticism and complaints, the evening will proceed in a completely different fashion.

The teacher can still offer suggestions for improvement but in order to adhere to the theme of the evening, he or she would presumably begin with words of praise and even couch the criticism in more palatable, upbeat terms.

Parent-teacher conferences can be a traumatic experience. We may expect something bright and cheery and hear the exact opposite, frequently with little to no preparation. And when a teacher attacks our child (even assuming a good motivation) we tend to get defensive. It is counterproductive to the goal of helping the student as well as the goal of working cooperatively with the teacher. We have now become adversaries instead of allies.

But if instead it’s called nachas night, if we’ve heard a lot of positive comments along with some suggestions for growth, if we sense the teacher’s desire to see the good in our children, we will respond in kind. We will be better able to work together to benefit the student. And we will both benefit as well – with a healthier, happier child, both in the classroom and outside it. This is a powerful example of what a difference reframing can make.

It’s a very simple wording change but it leads to a much more important change in attitude. And I know that my daughter, instead of replicating my experience of dreading parent-teacher conferences, is actually looking forward to it.

Show Up and Show You Care

Yom Kippur: Our Second Chance
Is Grease the Word?
Dried Fruit Compote
Scientific Curiosity and the Divine Encounter
Comments
MOST POPULAR IN Family
Our privacy policy
Aish.com Is Looking for Great Writers