My Son, the Fanatic 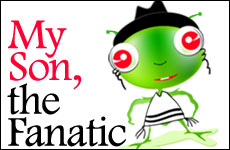 My son was becoming religious, and I wondered where did I go wrong?

I was pacing in my hotel room at the Hyatt Hotel in Jerusalem, eagerly awaiting the arrival of my 19-year-old son, Richard, whom I hadn't seen in six months. He was spending his junior year at the Hebrew University in Jerusalem, as I had done 30 years earlier. It was Saturday morning, so things were pretty dull for a secular Jew such as myself. I was relying on Richard to provide some amusement. Perhaps we would visit the Arab shuk.

Finally, there was a knock on the door, and I opened it to find my adorable son. After we embraced warmly, he said, "Mom, we're invited to the Rabbi's house for lunch."

"What rabbi?" I asked, as much perplexed as alarmed.

"You'll see. Just come with me," was Richard's not very reassuring answer. This was not what I had in mind for amusement.

After about a 15 minute walk, we arrived at a relatively new apartment building, and Richard led me confidently to the right door. This was obviously not his first visit. A very young Canadian rabbi and his wife from Vancouver (our home town) greeted us as we entered their clean but sparsely furnished apartment. Seated around their dining room table were about ten North American students, both boys and girls, all of whom were spending the year at the Hebrew University.

The impression that I formed immediately was that here were a group of youngsters, feeling lonely and isolated, away from home for perhaps the first time, ripe for conversion by religious zealots, and my son was among them. I remember distinctly wanting to get us out of there as quickly as possible, without being impolite.

When the lunch was finally over and we were just the two of us again, I confronted Richard. "What was that about?" I asked him, my annoyance scarcely disguised.

"Mom, I might as well tell you. I am getting closer to Orthodox Judaism. It feels right for me. I think it contains a lot of truth."

"What truth?" I countered. "You're young and vulnerable and ripe for the picking!"

I left Israel hoping that this was just a rebellious phase and that he'd once again become a good secular Jew.

The discussion/argument continued for a few minutes longer. I soon resolved to let it go, knowing that I would not get anywhere and that to persist would do more harm than good.

The rest of my time with Richard in Israel passed pleasantly, and I think we both silently resolved that it would be best not to raise it again. I left Israel hoping that this was just a rebellious phase that he was going through and that he would come to his senses once back in Canada, and would once again become a good secular Jew.

This was not the case. Upon his return to Canada, Richard stubbornly clung to Orthodoxy. He gave up the nights of beer drinking and partying with his buddies. He no longer ate in non-kosher restaurants. He went to synagogue on a regular basis. He joined a study group. He made my life difficult with rules of kashrut. He went back to Israel for a year to study in a yeshiva.

"What has befallen me?" I lamented to my best friend, Morley. "Where have I gone wrong? It's like I have a kid who lives on another planet."

"It could be worse, Brenda," Morley said by way of comfort. "Richard could have joined a cult."

When I reflected on it, I began to see that Richard's espousing of Orthodoxy was not such a radical departure from who he was. He had always been spiritually inclined. Even as a child, he pondered the big questions, which he would often pose to me. "If God is everywhere, why can't I see him?" "What happens to a person's spirit after he dies?"

I recall that when he was in third grade in Talmud Torah in Vancouver, he brought home a report card full of C's in Hebrew studies. His teachers knew he could do better and were not amused at his self-appointed role of class clown. I told him that if he couldn't do better the next term, he would find himself in a public school. The next term he achieved mostly A's, and a couple of B's. Astonished by this turnaround, I asked him for an explanation. "I didn't want to give up studying Torah," he said. "It's fun."

I began to see that undeniably, he was becoming a happier, more fulfilled person.

Early evidence notwithstanding, as a mother I was more concerned about my son's happiness and well being. Was this new religious path having a good influence on his life? I began to see that undeniably, he was becoming a happier, more fulfilled person. A passion for argument fueled by temper gave way to a well reasoned, respectful exchange of ideas. Blame and accusation were transformed into understanding and acceptance. Impatience and dogmatic opinion were replaced by compassion and tolerance. Equally important, the people in his community shared the same attitudes and values. How could I not be pleased with my son's choices?

My son's "religious conversion" has also had an enormous influence on our relationship. Perhaps initially motivated by the desire to fulfill the commandment of honoring his mother, over the years Richard has created a relationship with me based on mutual respect and devotion. It has opened the door for us to get to know each other in a very authentic way, to discover how similar we are in our humor, outlook, and general sensibilities. Though we live 3000 miles apart, we have developed a closeness and genuine affection. We have a wonderful friendship of which I am very proud. I honestly don't think this would have come about to the degree that it has had he not become Orthodox.

I did have one major area of complaint. Despite many introductions he couldn't seem to meet the right woman. I was worried.

And then he found her, his bashert (soul mate), Orthodox, of course, and a mirror image of his own excellent values.

It gives me great nachas (pride) to see what a wonderful husband my son is, both from a Jewish point of view, and as a measure of who he is as a person. When I asked him where he learned to be such a good husband, he replied, "I am not sure. Either from watching my rabbi with his wife, or from my TV days watching Bill Cosby with his."

It has surprised me to realize that through my son's journey of discovery, my own connection to practicing Judaism has been strengthened in subtle ways. I have a greater awareness of the Sabbath and holiday traditions. I have begun to light Sabbath candles. I hosted a Passover Seder. Richard and I often have stimulating discussions on issues of custom and Jewish law. Although I still view myself as a secular Jew, I am very proud to have a son who mentors and inspires me to a stronger connection to my own heritage.

Victories of the Heart

A Year of Memory