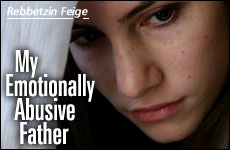 Cruelty and abuse, whether physical or emotional, should never be tolerated.

Q: My father has been absent or emotionally abusive of me throughout my life. Any attempt on my part to connect with him has failed miserably. Even at this late stage, I have been unable to have an adult to adult relationship with him. He is a habitual liar, verbally abusive and appears to delight in disappointing people and creating totally unnecessary chaos all around him.

I do not know what is wrong with him. I only know that his lies and rejection of me and my family have caused me years of pain. As much as I love him and wish things were better with us, at age 50 I realize this may never be. I have made sure our son is not affected by his grandfather’s indifference and unkindness.

Is it okay to stop trying and to detach from him? He is wealthy and does not need anything. I want to do the right thing, but in being good to him I hurt myself, because my father treats me as if I were not even his daughter. He only acknowledges his son, totally overlooking me, my sister and our families.

What is the right thing to do?

We are prisoners of those whose approval we seek. Sadly, you have tried to get into the good graces of your father for the better part of 50 years, and to no avail. It is finally hitting home. The realization is dawning upon you that this situation is unlikely to change. Coming to terms with reality is a major step in the direction of healing and healthy living.

Until now your expectations have set you up for recurrent disappointment and worst of all resentment. Resentment, it has been said, is like drinking poison and expecting the other person to die. In fact, as you know, it is the one harboring the resentment that suffers debilitating pain and anguish. You, my dear reader, have eaten yourself up alive all these years. And now it is time to step back.

You have eaten yourself up alive all these years. And now it is time to step back.

We should not set out to control or even modify the behavior of others. Jurisdiction extends only to our own responses. Your father’s behavior toward you during these many years has proven the verity of this principle, as you stated “all my attempts have failed miserably.”

We often operate with a preconceived script for our lives and our relationships. In this case, you had an expectation of how a father should be. At some point, confronting the truth becomes inevitable. He is who he is and what he is. Certainly there are factors that impact who a person becomes – childhood experiences, parents, teachers, friends, traumas (e.g. Holocaust), etc. Exploring background information, his past, or his formative years may or may not be helpful in generating understanding and perhaps feelings of compassion. Nonetheless, the script as you would have wished it to be is unlikely to ever be realized.

Acceptance would, of course, be the ideal approach. Acknowledging who he is – his limitations and letting go of expectations – would be liberating. It would allow you not to banish him from your life, while at the same time it would remove the shackles of power that he wields over you. This can be done in two ways:

Firstly, a mode borrowed from the martial arts has been suggested to be effective in the emotional arena as well. Physical fighting stances involve balance, alignment, weight distribution and posture. A psychological fighting stance is all about emotional balance – self-acceptance, abiding by your own moral code, forgiving yourself for failing to reach perfection (a rare achievement) and finally, offering yourself as much compassion as you would give a beloved friend.

This works because cruelty, to be effective, has to land on a welcoming spot in the victim’s belief system. In Eleanor Roosevelt’s immortal counsel: “No one can make you feel inferior without your consent.” If we hold onto ourselves, secure in the conviction that we are okay (and that usually requires a lot of work), it is unlikely that others will seriously rock our boat. It is usually the insecurity we live with that allows those who seek to marginalize us to score points.

Another tactic is to be totally upfront and disarming by making statements such as: “Dad, this really hurt me, I need you to stop, I need you to hear me out.” Share your feelings and needs openly. Don’t wait for him to get it on his own. Let him know point-blank how distressing the given comment or interaction has been to you.

On the other hand, you can continue a degree of relationship from afar. Send holiday and birthday wishes, or leave a voice mail when you know he won’t be answering. This allows you to show your respect, without having to directly interact. From your letter it seems that you still yearn to connect, and this means you don’t have to quit cold turkey.

Consider Helen, whose father smothered her and sought to control her with his incessant demands for attention. Nothing she did ever sufficed. Her husband and children found his unending criticisms and complaints oppressive. Helen finally moved to another city. Phone calls were more manageable because she could either not answer or cut them short. Having gotten some distance and perspective, Helen invited her father to join her in counseling so that they might work toward a more mutually satisfying relationship.

Now, some years later, Dad comes to visit but respects Helen’s boundaries – when to come, how long to stay and when to leave. Phone calls are engaged when it is convenient for both of them. On occasion when things get out of hand temporarily, they go back to the therapist for adjustment.

Do not feel guilty for choosing to detach in order to protect you and your family.

Parenthetically, Helen worked very hard for the self-affirmation and confidence that allowed her to hold onto herself and do what she knew was right, and not to allow the fear of rejection and guilt to derail her.

The bottom line is that cruelty and abuse, whether physical and/or emotional, is not normal and should never be tolerated. Do not feel guilty for choosing to detach in order to protect you and your family. Our obligation to honor our parents does not mean putting your emotional well-being in danger.

In the event that the suggestions articulated above have not and would not work for you, I would recommend that you seek professional help. You deserve to find peace, to come to terms, and to assuage the torment of so many years.

Can My Marriage be Saved?

A Woman For All Seasons

The Internet and Intimacy

Toxic Influences
The 21st President of the United States: Failure or Inspiration?
Hiding Their Jewishness
The Jewish Pope: Following the Questions Home
Comments