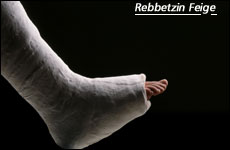 My leg wasn’t the only thing that got shattered that fateful day.

A year and a half ago I was struck by a car during a casual summer walk with a friend. I was fortunate to survive the accident, but my leg was shattered and I needed surgery to reconstruct my leg. Complications followed and, not unpredictably, my recovery has proceeded slowly and sporadically, with many ups and downs. Additionally, the accident had an adverse effect on my immune system, and what might have been ordinary episodes of cellulitis and shingles, turned into prolonged and excruciating ordeals. It is fair to say that the physical residual toll is still being exacted. The post-traumatic emotional scars are less obvious, manifesting themselves in almost imperceptible ways, but are, nonetheless, a reality with which I have to contend.

Life as usual came to a halt. Deadlines to which I was committed had to be abandoned, appointments canceled, and a myriad of other obligations which are generally viewed as non-negotiable, were set aside in deference to healing and recovering. All the must-do’s became irrelevant, non-issues. Slowing down was mandated by a wake-up call, a message sent by Divine providence. This unanticipated respite in the stream of my life provided necessary reflection and contemplation. The following are some of the thoughts and insights born from this experience.

With Body and Soul

My immediate concern following the accident was physical recovery. I gained a new appreciation for the functioning of the body that we tend to take for granted. Moreover, I received a deeper understanding that the body and soul are interdependent. We cannot realistically pursue spiritual goals without the cooperation of the body.

My body for the most part was dictating the terms of my existence.

Like it or not, my body for the most part was dictating the terms of my existence, and I had no choice but to comply. This was a rude awakening, but I took them as my marching orders from above. I had to let go of all other agendas and dedicate my work for this period of time to recovery. So the spiritual and physical merged and became one, a seamless, fused whole. God appointed us as custodians over a physical body that was intended to serve as an eager partner to our exalted souls. The Jewish perspective, rather than promoting the obsession of physicality so rampant in our culture, urges balance as the key element. The Torah encourages a middle of the road approach, eschewing both neglect at one extreme and obsessive preoccupation at the other.

After such an event, clichés become real. The vulnerability of the human being is of no surprise to anyone. However, when one experiences how dramatically life can change in a split second, the cliché describing the fragility of life takes on new meaning. Accidents and serious injuries become life altering events.

The outpouring of well wishes from near and far, the exquisite attention to my every need by my family, devoted friends, and special community, gave caring a new definition, and was nothing short of awesome. I was enveloped and sustained by a virtual sea of warmth. There is no question that when the chips are down and the going gets tough, relationships are what pull us through.

I think it’s fair to say that all of us, to one degree or another, operate under the illusion that we control our lives, and that our lives lend themselves to considerable predictability. Walking out on a beautiful Friday afternoon, all of my Shabbas preparations done, I believed I had everything under control. Instead, I found myself on a stretcher being rushed to the trauma center at Froedert Hospital. The myth of human control was shattered.

The myth of human control was shattered.

It brought to mind the anecdote of a shtetl Jew walking to shul early one morning with his Tallis bag under his arm. Unbeknownst to him, the king was on one of his jaunts through the streets of his domain disguised as a commoner, surveying and assessing the needs of his subjects. Seeing the Jew, he approached him and inquired where he was going with the curious package under his arm. The Jew replied that he really didn’t know. Puzzled, the king repeated the question several times, only to find that the Jew was adamant about the identity of his destination. Furious over what he viewed as deliberate obfuscation, the king ordered that the Jew be arrested and imprisoned.

The king later visited the prisoner, mystified by the illogical answer the Jew had given him. “Your Majesty,” the Jew said, “I knew where I planned to go, and that was to the synagogue to pray, but where I was going in actuality was something I could not know with certainty, because, as your Majesty can see, I ended up in jail instead.”

We all make plans, as assuredly we must. One cannot navigate life without goals and strategies. But it is imperative that we do so with the undeviating awareness that the Almighty runs the world. In the last analysis, there is a Divine plan, and life is such that often times we find ourselves on detours from the mental map we had envisioned and scripted. When this occurs, our assumptions about what should be are challenged. Suddenly everything is quaking, trembling, and falling apart. We have no idea what is happening or why.

When we let go of our futile attempts to force God’s Hand, life becomes more of an adventure.

Surprisingly, after the initial shock I found great comfort in letting go and handing the world over to God. I realized that when we let go of our futile attempts to force God’s Hand to our liking and to our agenda, life becomes more of an adventure, interesting and exciting. One comes to understand that what our next moments will bring are known only to the Divine Orchestrator whose love and concern for us craft the challenges we face. He steers us in directions unanticipated, to roads less travelled. It’s as though a Heavenly Voice rings out on the loud speaker of the universe and exclaims, “Trust me! I alone, your Creator, knows what is ultimately in your best interest. So leave it to me. Fasten your seatbelts and enjoy the ride.”

A by-product of appreciating the unpredictability of life is that one comes to an appreciation of the preciousness of the now, this moment, slowing down and noticing our surroundings. It was Einstein who said, “There are two ways to live your life, one is as if there are no miracles and the other is to live as if everything is a miracle.”

During my convalescence, my son Rabbi Benzion and his children brought beautiful plants of all sorts of flowers and decorated our deck. Not to be outdone, my community treated me to an outdoor patio set. For weeks, it became my favorite place to sit and enjoy the symphony of chirping birds, the quiet company of summer breezes, and the elegant colors of God’s blossoms. Before the accident, I never would have given myself permission, the space, and the time to just be; to relish the simple gifts with which God surrounds us. I walk through my days now much more mindful of my blessings; my husband, children, grandchildren, great grandchildren, friends and the many beautiful sights and sounds of life. They are all huge, and I have learned that I don’t want to run past them.

Rachel Naomi Remen, an author, relates in one of her books that when she was a small child her grandfather shared grape juice with her on Friday night and wished her “L’Chaim,” explaining that it meant “to life.”

She records that his response has been a beacon escorting her through life. “Just to be alive,” he said, “is in and of itself already good.”

The Modeh Ani prayer recited first thing upon awakening in the morning has taken on new meaning for me. Thanking God for returning our soul to us for yet another day represents His great faith in us and His great love for us. It acknowledges that He respects us and needs us in His world. For that I am truly grateful.

Coping With What's Eating You

The Joys of A Large Family

Jewish Mother's Highs and Lows
Why the Sexual Revolution was Bad for Women
The Princess: Sukkot
How Oswego, NY Became a Haven for America’s Jewish Refugees during World War II
Comments
MOST POPULAR IN Family
Our privacy policy
Aish.com Is Looking for Great Writers

Why the Sexual Revolution was Bad for Women
The Princess: Sukkot
How Oswego, NY Became a Haven for America’s Jewish Refugees during World War II
Helping Jews after Hurricane Ian’s Devastation
Kosher Dillin': The Jewish history of Pickles
Judaism and Human Creativity
Jews and Beer: 8 Surprising Facts
After 500 Years, Closing the Circle
Patriotic Jews and the American Civil War
Why Are The Prayers Of Yom Kipur So Repetetive?
1 2 3 … 2,915 Next »