My Path to Getting Engaged 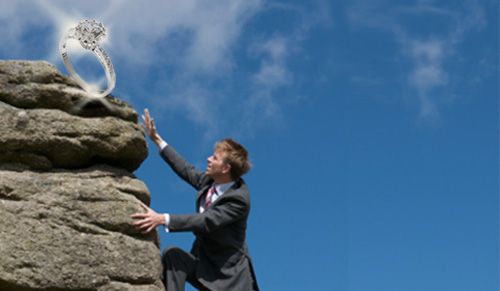 5 critical lessons I learned along the way.

Three weeks ago I got engaged to a vibrant, beautiful woman filled with great character traits, humility, and a witty sense of humor. Since then I’ve been asking myself what exactly happened that allowed for this wonderful and amazing relationship to so easily unfold over the last three months? This has not only been the most rewarding and enjoyable relationship I have ever had, it has also been the easiest, which was one of the indicators early on for me that Megan was indeed my soul mate.

I never found dating to be fun. In fact, to be perfectly blunt, dating is truly an awful experience, unless you are dating “the one”. My own road to engagement is not exactly paved with a red carpet with glowing rainbows and twinkling stars. On more than one occasion during my dating journey, I took roads that were dead ends and just kept going forward even when the pavement had clearly ended miles behind.

I thought these relationships weren’t working because I wasn’t trying hard enough, or doing or saying the right things in the right time. It had nothing to do with the fact that the match was truly a mismatch from the beginning. I can’t even be sure that I was ready to get married in any of these relationships. I was too busy trying to work through my own unresolved issues to even seriously considering marrying any of these women. But I do believe that I learned something important from each dead end I went down that helped me be in the head space to finally attract and have a healthy relationship. Here are five lessons I’ve learned along the way. Maybe they’ll help you find your soul mate.

1. You Must Truly Desire Marriage

Two months before I met Megan, my fiancé, I was having a conversation with a woman at a Shabbat lunch about dating. She said to me, “Doesn’t the idea of marriage scare you?” I responded to her by saying that I was more terrified of not ever getting married and remaining single my entire life. It was at this moment that I realized I was ready to find my “bashert”.

This is an important first step for those who want to get married. It’s not enough to feel like you want to get married; you have to feel like you need to get married. I want to see a movie tonight, but who knows if I will get around to it. I need to get up and go to work in the morning. Without this desire, you’re better off staying home and renting a movie, meeting a friend for coffee, learning Torah, reading a book, watching a game… you’re not ready to date for marriage.

This brings me to another lesson I learned that helped me get engaged: I no longer had time to waste on people who weren’t serious about marriage. The reverse was also true: I no longer wanted to waste another person’s time if I wasn’t ready to get married. This mentality of not being willing to waste another second in dating helped me to focus my attention on someone who was of the same spirit and mindset as me. This means having a keen eye for red flags that can arise early on. Looking back, I was quick to give the benefit of the doubt to people who exhibited behaviors or who said things that quite frankly, made me feel uncomfortable. It’s best to pay close attention to feelings of discomfort that arise from what someone is doing or saying on a date. This is often your intuition communicating to you that something is not right. But be careful not to mistaken your own fears and insecurities for genuine intuitive moments, which leads me to the next point.

3. Remember that Self-Sabotage is Deadly

It’s absolutely imperative that self-sabotaging behaviors and tendencies are purged out of your system before pursuing any kind of goal or dream, marriage included. My self-sabotaging symptoms expressed themselves in job conflict, picking unavailable partners, and stability boredom. Each of these needed to be weeded out of my consciousness before I was ready to meet an available, stable, and healthy partner. A dose of humility is essential here; it takes some pride-swallowing and ego-deflation to admit that your own behaviors and actions are preventing you from actualizing your dreams and goals, especially getting married and raising a family. Therapy, 12-Step programs, honest conversations with God, seeking the counsel of good friends, and “being sick and tired of being sick and tired” are all useful methods of curing self-sabotage.

4. Find Someone You Can Have Fun With

Five months ago, “fun” would not have been the first word I would have used to describe the dating process. Nor would it have been the second, the 10th, the 50th or the 100th. Isn’t having fun while dating for marriage, especially in the early stages of the dating process, verboten? I was sure to be penalized for suggesting bowling, playing pool, having a picnic or going to an amusement park on the first few dates. I became wary of suggesting ideas that could be deemed out-of-the-box or fun. I stuck with hotel lobbies, hikes (which are fun, but in a different way), coffee, or dinner. There was no adventure, little sincere laughter, and plenty of me not feeling like me the way I wanted to feel like me.

I was on the brink of giving up on dating altogether when I decided I needed dating to be fun again. As a result, I decided to take Megan to a local pier on our first date. I decided that no matter what happens, I was going to do something I enjoyed and most importantly, something that I was comfortable doing. We watched the sunset at the end of the pier, and as we were walking back towards the parking lot, I asked her if she wanted to play some arcade games. She won me over a few minutes later playing air hockey.

5. Know What You Need in a Marriage Partner

Shortly before meeting Megan, I figured out what I truly needed to find in a woman I’d consider marrying. It was a short list, something I strongly recommend. I needed three things: a woman on my level of religiosity, a woman who had at least worked through some of her childhood issues, and as mentioned before, someone I could have fun with. This was my checklist. I was unable to compromise on any of these items. Making this short but precise list actually made me somewhat depressed because honestly, I had never found all three of these items in one person, and I didn’t think I was going to. But that didn’t matter; this is what I needed. The important thing here was that this was my list, and not someone else’s list, or a list I thought I needed to have in order to conform to some kind of social or even religious standard.

Getting engaged to a woman as special as Megan was a culmination of these five steps: strengthening my desire to get married, not wanting to waste my time any longer, working extremely hard on removing my self-sabotaging character defects, having fun while on a date, and honoring and understanding what I truly needed in a wife. Once I was truly ready, she appeared as if out of nowhere. She was visiting her family here in Los Angeles, and the rabbi from my shul asked me if I wanted to go out with her.

It was really that easy and I am truly grateful to God for bringing Megan into my life – when I was ready to see her for who she really is: my soul mate.

Mitch Karpp is currently working as an English as a Second Language Teacher in Los Angeles, CA. He earned his BA degree in English at the Hebrew University of Jerusalem and began his teaching career as a teacher of English as a Foreign Language at Jerusalem area high schools in 2000. Since then, he has lived in Boston, Southern Africa, New Mexico, and Los Angeles. He met Megan in July 2013, a day after his 40th birthday and was amazed by how easy dating could be when you find the "right one". He loves writing and now wants to share his story to help others struggling with Jewish dating to persevere and work on themselves so they can also be ready to meet "the right one". You can read more of his writings about Jewish dating and his life experiences on his blog at meirinlaagain.blogspot.com

5 Dating Rules You Should Break

Dating Wisdom from “Are You My Mother?”

10 Questions to Ask Before Getting Married

Where’s the Ring?
The Softball Player
How This 6 Generation Bread Baker Brought Back Israel’s Ancient Grains
Olivia Newton John’s Grandfather was a Nobel-Prize Winning Jewish Physicist
Comments
MOST POPULAR IN Dating
Our privacy policy
Aish.com Is Looking for Great Writers