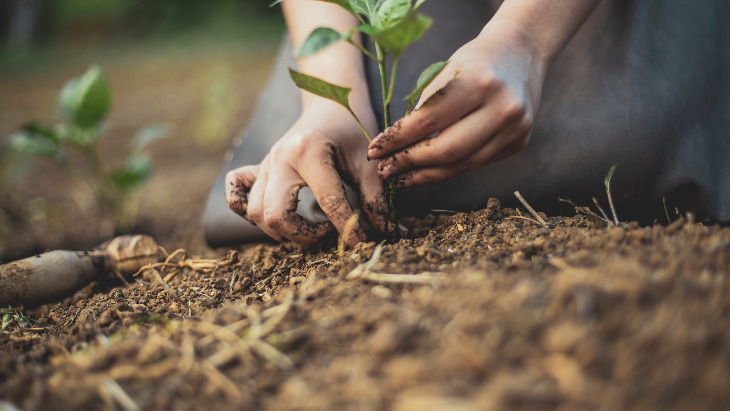 While I am busy with fertilizing the soil, pulling the weeds, and feeding the plants, I am digging for something much deeper.

My mother died and I suddenly became a gardener. I’ve planted flowers, shrubs, and trees. Watering and fertilizing them has become an important part of my daily routine. I love the fragrance of soil and the way it feels between my fingers. I’ve discovered that gardening nourishes me.

My mother’s house had been full of indoor plants and they all flourished. I’ve tried to cultivate her genius for all things green, but any indoor plants I’ve had never survived, except for two which seem to thrive from neglect. The less I water them, the more they grow.

It’s been three months since my mother passed away and my grief has not lessened. Instead, it's become more acute. I think about my mother, her green thumb and my awakened interest in gardening. I'm sure there's a connection.

I started reading about gardening techniques and follow the expert’s advice. One technique is pinching that involves cutting off the top of the main stem. Pinching encourages the rest of the plant to branch outward and grow fresh shoots.

The crisis of my mother’s death has planted the seed for my personal growth, and it’s found expression through horticulture. While I am busy with fertilizing the soil, pulling the weeds, and feeding the plants, I am digging much deeper. The unconscious is a powerful engine that drives our every action. When we make the unconscious conscious, we are rewarded with the insight that facilitates personal growth. I believe I'm on the road to achieving that.

My mother lived with us for the past 10 years. She had a host of medical conditions, but she never let them bog her down and she lived as full a life as she could. Still, she needed considerable attention which we provided daily. After my mother contracted Covid-19, she spent the last six weeks of her life being shuttled between the hospital and the rehabilitation facility. While it was a privilege to be her primary caregiver, it was also a demanding task. It required mental, emotional, and physical stamina, and as my mother’s condition deteriorated, my decline mirrored hers. As I saw my mother become weaker as she edged closer to death, my energy ebbed, too.

During the last few days of her life, she was only semi-conscious, and I was only semi-conscious as to what was happening to her; I saw her condition deteriorate but I did not allow myself to know that she was dying. The truth was inconceivable. My mother had survived the Holocaust and many life-threatening illnesses. After each diagnosis of cancer (she had three), she fought to live. She was not someone who succumbed; she was someone who survived.

During those last few days, she barely spoke, but there were two words she kept repeating: “I can’t, I can’t.” I didn't dare ask what she meant because until then she had shown me she was someone who always “could”. My mother’s skin had taken on a gray hue but I refused to acknowledge the clear signs that foreshadowed her imminent demise.

My mother, the main stem of our family, has been pinched off. Now her buds are encouraged to grow, to flower and to expand.

She died alone, ninety minutes after I left her bedside. Had I known she was going to die, I never would have left. People say that a soul will not depart if their loved one in the room will not let them go. Is that what happened between me and my mother? Had she known I could not let her go, so she was not free to die until I left? Was that the message she was sending me by repeating “I can’t, I can’t”? Or did I leave because I realized she was dying and could not bear to witness it. Both are probably true.

My mother’s transition from this world to the next was a painful one. She endured awful suffering during the last few weeks of her life, and as her daughter, seeing her suffer and being powerless to do anything to make her more comfortable was a greater trauma than her actual death.

Tending to my flowers and shrubs has become my new hobby. My mother, the main stem of our family, has been pinched off. Now her buds are encouraged to grow, to flower and to expand.

This is the time to nurture myself. I need to rest and recover from the strain and anguish of watching my mother die a painful death. And as I rest, I think about pruning my fruitless habits and behaviors. Like the buds that previously rested, I know this period will be followed by one of growth. I know I will wake up and expand. I will turn to the sun and blossom.

Facing the World: A Daughter's Relection