My Husband & the Laundromat 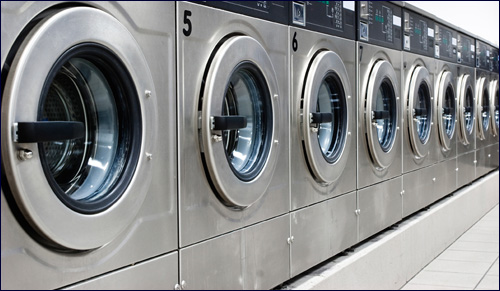 An epic true story of one family and a dryer.

For years I had a dryer that everyone told me was misnamed. It didn’t so much dry the clothes as toss them around for a few hours until we all decided enough was enough and wore them whatever state they were in. I stubbornly refused to buy a new dryer claiming we could live with the situation.

This decision was taken out of my hands however when it became impossible to turn the dryer on. As the rest of the family cheered (I don't suspect anyone of actually sabotaging the dryer…) I marched off to the store to finally purchase a new appliance.

Since it had been years since I had bought one I felt like I had dropped in from another planet. There was steam dry and sensor dry and the non-wrinkle option (as opposed to the wrinkle one?!). It was a little dizzying. I was most concerned with capacity and speed. I had carefully measure the dimensions of the laundry room and I chose the largest one that would fit there.

As we waited for the delivery date, my husband made repeated trips to the local Laundromat, asking me each day to remind him when the new dryer was arriving. It finally arrived, but it never occurred to me to measure my doors (can't they tilt those appliances or something?). It never occurred to me that the doors on my almost 100-year old house might be smaller than doors on houses today. The dryer wouldn’t fit through my front or side door! Back to the store it went and back to the Laundromat trudged (okay he drove but trudged sounds more dramatic!) my husband.

A few days later I returned to the store. I chose a more compact machine and placed my order. I chose a delivery date and we once again eagerly awaited it. The dryer arrived and was hooked up. After a small celebration, we threw in a load of clean clothes and sat down to eat a relaxing dinner, my husband eagerly anticipating an evening that didn’t involve the Laundromat. The dryer went round and round and round but the air was cold and the clothes were wet.

Grimly my husband returned to his (now favorite) local haunt and I called the store to complain. They promised to return early the next day with a replacement model. But somehow that request never made it to the delivery company and, although I waited all day, no dryer arrived. The waste of time was starting to take a toll and my patience was beginning to wear thin.

A very apologetic delivery man arrived the next day. Before removing the new, seemingly defective, dryer, we decided to try it one more time. We discovered that the problem was not with the dryer but rather with the exhaust pipe. It was clogged with lint and needed to be professionally removed and then re-attached to the dryer. Seriously?

This was beyond the scope of the appliance store or its delivery man so I called my local handyman. “I was sick last week and I’ve been swamped. Can it wait a few days?” he asked. At this point, I was reduced to begging and hysteria, joined by my husband whose nights at the Laundromat had quickly lost their entertainment value. Sensing our desperation, he very kindly offered to rearrange his schedule (I apologize to whoever had to wait) and come the next morning. He did, the pipe was cleaned and hooked up and we finally had a functioning dryer. It had taken literally years.

But, like so many things in life, once again I learned the lesson of gratitude. (Perhaps if I weren’t such a slow learner, I wouldn’t need to face these situations over and over and over again.) I actually get excited every time I turn the dryer on and it works.

And I’m appreciative – that I don’t need to hang my clothes outside, that I was able to purchase one, that it actually works well, that all the service people were so kind and helpful.

It doesn’t have the steam option and some of my clothes are still wrinkled, but they’re warm and dry and so am I. And I am also grateful for all the other small things in my life that work – my washing machine, my refrigerator, my freezer and (for all you winter soup makers!) my hand immersion blender….

Our opportunities for gratitude are literally endless; sometimes the Almighty steps in, in a gentle way, to remind us not to miss them.

Appreciating My Jewishness
Vayelech 5783: Regret and Repent
Rabbi Sacks: Focus On the Important, Not the Urgent
Put Your Foot Down: Are Human Feet Poorly Designed?
Comments
MOST POPULAR IN Family
Our privacy policy
Aish.com Is Looking for Great Writers