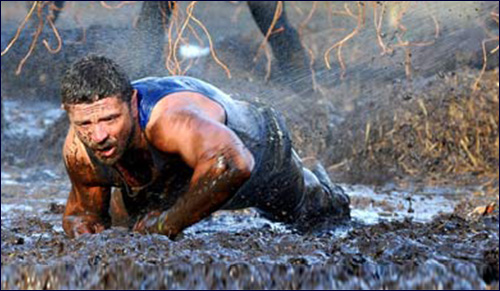 The grueling physical challenge was everything my DNA says I should avoid.

I never figured myself to be the type of man who would want to try Tough Mudder, a popular military-style fitness endurance event. As the heir to a treasure-trove of Polish-Jewish genes of hapless, short men (housepainters, tailors, Talmudists), my father unconsciously imparted to my brother and me that “fitness” was for tall Swedes and Herculean WASPS. We, the descendants of Jacob, were by virtue of temperament, proclivity, and body types to stay home, study the texts, and tend the sheep.

“Lev V’nefesh,” body and soul, my trainer said. “You need to have both.”

But then I started running in my 20s and lost my Yeshiva-bochur weight, and kept it off. Still, upper body strength and feats of derring-do, irrationally, were off-limits.

About a year and a half ago, after having been prodded by my dear wife to “bulk up, man,” I reached out into the world for a trainer. I posted the request on a local listserv and a tall, Syrian-Iranian young man, a mortal with the body of a Greek god, answered the call.

As it turns out, Moshe, too, was an observant Jew. He told me how he had transformed himself from a depressed, over-eating, body-abusing teenager into someone, who, I had to admit, looked like Charles Atlas. “Lev V’nefesh,” body and soul, he told me the first time we met as he pointed to a volume of Talmud on my desk. “You need to have both.”

It wasn’t long before he told me about Tough Mudder. “It’s a blast, you’ll have the time of your life,” he said. I confided in him the silent, unconscious imprecations of my father and his ancestors (and the men in shul: “You’ll die,” they told me) that haunted me: Don’t extend yourself physically. This is the way of Esau. Though I’m almost twice Moshe’s age and half his size, he encouraged me: “You can do it. I see what you’re made of.”

I met him at Raceway Park in Englishtown, NJ, an unholy convocation of bandana wearing, beer-swilling Esau-types. I joined Moshe’s platoon, four Sephardim from Deal, NJ—his friends. There was Noah, a multi-year veteran of the U.S. Navy and a graduate of Torah Academy of Bergen County, and Robert and George, all observant, handsome, marvelously fit, and in their 20s.

“You’re crushing most of the guys here,” Moshe assured me as we ran through the obstacle course, sprinting through the mud while being shocked with 10,000 volts of electricity, jumping through a wall of fire (stopping only to switch off carrying a 45-pound pack), plunging into a dumpster filled with ice water and swimming submerged to the other side. We walked off a plank from a 20-foot high deck into cold, muddy water. (A man died last spring doing this stunt.)

My beautiful 18-year-old daughter Avigayil endured a four-and-a-half hour wait while I completed the event. When I emerged I was unrecognizable to her, caked with mud and grime. I reassured her: My hands are the hands of Esau, but my voice is still Jacob’s.

This article originally appeared on www.tabletmag.com

How to Enjoy a Summer Vacation in Israel

Really Bad Jewish Ideas
Were Adam and Eve Jewish?
How I Learned to Love the Multiverse
10 Big Jewish Inventions
Comments