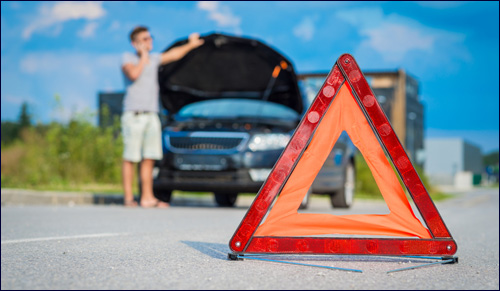 In Israel where miracles happen daily, there’s no such thing as a non-believer.

It’s amazing how many helpful people you meet when your car breaks down along the highway. Especially when you live in Israel. My neighbor as well as a bunch of total strangers stopped to see if they could help. One strapping young man zipped by but quickly doubled back and pulled over. “Don’t tell me you got another flat, Daddy! We just changed one last night! Uh, oh. There was no time to fix it yet, right? No spare, right?”

No one ever said the boy wasn’t sharp. “Right. No air, no spare.”

Not only did I have two flats, but both tires were total goners. And of course, as stated in the International Manual for Getting Stuck on the Road, “No qualified repair center that handles your warrantee shall be located anywhere near your current location.”

I called my wife to report in and aside from some tut, tut, tuts and oy, oy, oys, all she said was, “Don’t worry, you’re exactly where you’re supposed to be at this time. God runs the world.”

I ordered a tow truck and settled in for the traditional three-hour wait. I wasn’t too far from home but the leasing company wouldn’t let me leave the car unattended. They were afraid the car would be towed if I left it while waiting for a tow.

It wasn’t all bad though; you get to wear this cool, yellow reflective vest as required by Israeli law when stuck on a highway. The weather was perfect and my “parking spot” overlooked a picturesque moshav dotted with quaint, red-roofed cottages, surrounded by plush, green fields under a perfect blue sky.

I called in an order for coffee and cookies and before long I was sipping a steaming cup-o-java with home-baked cookies. Fortunately, my other son delivers.

Getting stuck along the highway is hell.

Finally, the tow truck pulled up. Although the driver wasn’t an observant Jew the first words out of his mouth were, “Don’t worry, you’re exactly where you’re supposed to be at this time.” Did he call my wife first?

In Israel, where miracles are our daily staple, there’s no such thing as a non-believer. For some, it’s just buried a little deeper than others.

The driver loaded up the car and we headed on out. No matter your age, riding in a tow truck is a thrill.

After a great bumpy two-hour drive that would make my grandchildren jealous, we finally arrived at the garage where I became the proud owner of two new tires. I arrived at work at 4:30 pm, gulped down a cup of coffee and headed on home. What a day at the office!

My car certainly has had an interesting month. Just a few weeks earlier, I drove from work to a family bat-mitzvah in Elon Moreh, a beautiful Jewish settlement in Samaria, northeast of Nablus. There are some hostile elements along the way who haven’t come to terms with the return of the Jewish nation to its homeland, including the entire village of Chamsa*, so I preferred to drive together with my brother-in-law who knew the way and had neshek (a “six-shooter”). My wife, mother-in-law, daughter-in-law and daughter who were coming from home, travelled with my son in his car. “Careful” is my middle name, so I insisted that they also hook up with our “wagon train.”

While I managed to meet up with my brother-in-law, my son got stuck in heavy traffic. We couldn’t wait that long, so he’d have to make it on his own, carefully. They all arrived safely a while after us, after driving through Chamsa, unarmed and unescorted.

Since I had been in a rush to catch my brother-in-law, I hadn’t taken the time to fill up my gas tank before I left work. I figured I could always fill up when I reached my destination and I had a bit less than half a tank left. The trip turned out to be longer than expected, and my car began to beg for gas about twenty minutes before Elon Moreh, its fuel gauge flashing in panic, but we both made it without any mishaps.

“I didn’t notice any gas stations in the area,” I mentioned to my brother-in-law when we arrived. “ARE THERE ANY GAS STATIONS OUT HERE?” I asked, almost as panicked as my car was. “I DIDN’T NOTICE ANY ON THE WAY.” Sometimes silence says a whole lot. In this case, it said, NOPE.

My detailed silent response was, "Oh."

After a great party, we held a powwow and decided that I should try to make it to a gas station some twenty kilometers away, coasting down hills in neutral whenever possible and driving without passengers to preserve fuel. Our nephew, a local, assured me that the Israeli army would arrive with gas within two minutes if I ran out. I absent mindedly wondered what could happen in two minutes, but once again, my family squeezed into my son’s tiny car and off we went. A few minutes down the road, with the fuel gauge going berserk and the car gasping desperately for a few last breaths of gasoline vapors, I realized that I had zero chance of making it to any gas station. I hung a U-turn and made it back to Elon Moreh to await my gas delivery.

So once again, my son, with a car full of loved ones, drove carefully through Chamsa, unescorted and unarmed, till he reached the closest gas station. He bought a six-pack of water, watered the asphalt with five of them, and filled them with highly flammable gasoline. He then headed back through Chamsa, carefully of course, no weapon, no escort, plastic bottles filled with explosive petrol, family and all, to his anxiously awaiting father. We filled my tank and set off for home, back through good old Chamsa. It was beginning to feel like home to them.

I am told that my family found their shuttle rides quite amusing, oblivious to the possible danger lurking on the outside, except for my mother-in-law who slept through the entire adventure. Personally, I didn’t find it funny at all, especially since I was the culprit. I recited Tehillim (Psalms) the entire hour it took for my family to return.

Who knows? Maybe the whole business happened so that a Jew would say Psalms for an hour? Maybe someone, somewhere needed it? Or maybe I was a jerk for not filling up before I left work! Or maybe both!

One thing I do know. The next time we head out in that direction, I’ll fill-up first, and then of course I’ll drive carefully.

* Name has been changed