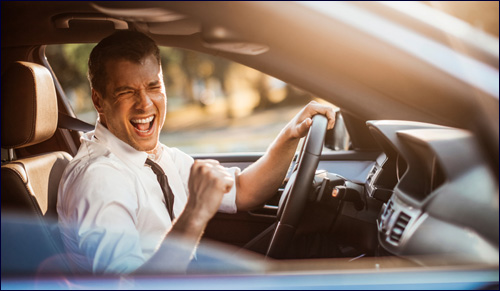 How to handle traffic jams when James Corden isn’t sitting in the car next to you.

I live in New York City where traffic is a given. There I was, stuck going North on the Van Wyck Expressway. I was stuck and I was late. I tossed a jealous glare out my window towards those lucky folks going south (racing along at an unthinkable speed of 40 MPH). I turned on the traffic report (it felt as useful as listening to the weather report during a rainstorm) and looked over at the clock on my dashboard – I was really late now – and then I peeked back over to those lucky southbound drivers.

Then I asked myself the two questions I ask myself when my life hits a skid, big or small:

I’ve been through harder things than traffic, and whatever the scenario, when I ask myself these two questions, it gives me the perspective that the difficulty is only temporary. This, too, shall pass.

In the big picture there is so much to be thankful for, even while sitting trapped in the car watching the minutes roll by: my wife, kids, the class I just taught, the sunset, great music…. In the thick of a setback it pays to focus on the positive rather than to wallow in a negative. Sometimes we hit some bumps in the road but that’s all they are – bumps! We’ll get over them and even if we get stopped in our tracks, eventually we'll get moving.

The traffic thinned a bit and I was gratefully moving at a pace faster than a limp. Then I realized how silly I was to even look at the traffic on the other side of the divide. They're traveling the opposite direction that I want to go. The only thing worse than getting stuck trying to reach my goal, is moving further away from it. All I saw was their speed, not their direction.

Life sometimes lands us tough and uncomfortable situations. We may question the path we are taking, which can sometimes be a very good thing, but when we are clear about our goal and know what direction we want to take, we shouldn’t think about doing a U-turn just because we crave an easier route. We need to stick with it and keep moving, even if the progress is difficult and slow.

I was happy to be moving in the right direction. I switched off the traffic report and turned on some music, performing my own little carpool karaoke, thankful for the time God was giving me to reflect, get centered and appreciate my blessings.

Simcha Loiterman tries to see the world through a critical yet open perspective and tends to think in colors, sounds, shapes and moving images. Simcha is interested in a variety of things and is hopelessly curious. He also feels very strongly that you can learn from everyone; everyone one has stories to tell, lessons to teach and kindles a spark of goodness inside of them. Visit his blog at thisisloit.wordpress.com.

Growth or Death: Ethics of the Fathers 1:13