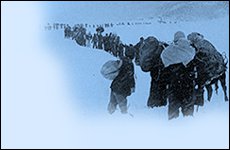 My diminutive grandmother was larger than life.

All my life I heard larger-than-life-stories told about my grandmother. There were stories of surprising strength of character. Stories of incredible selflessness. Stories of amazing heroism.

Most of these stories happened when my Bubby fled her home in Poland, along with my grandfather and six young children. They were running from the Nazi juggernaut which raced eastward through Europe. After successfully crossing into Russian controlled territory they were arrested as Polish spies. Eventually their three youngest daughters died from disease, malnutrition and the sheer exhaustion of the many months of being on the run.

They were sent deep into the Russian gulag where extreme cold, hunger, fear and oppression were the only things reliable enough to always count on. Bubby was thrown together into this hellish existence with a group of rabbinical students (her future son-in-law, my father, was one of them) and other Jewish refugees of World War II who were all inmates of the same prison camp. This happened during the time that millions of Russians were starving to death and it seemed that the same fate awaited this ragged collection of Jews as well.

But Bubby would have none of that. Somehow, the five-foot-tall dynamo charmed, sweet-talked, bribed, and cajoled the authorities into giving her extra large food rations which literally kept the entire group of many tens of people from starving to death.

My grandfather was arrested and questioned for days on end. Bubby came to the rescue.

Life was awfully cheap in those days; a Jewish life cheaper still. Anyone suspected of even the smallest crime could be summarily executed. Under these conditions my grandfather was arrested and questioned for days on end. Bubby came to the rescue. 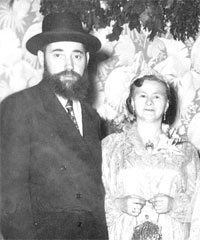 She somehow managed to acquire several small vials, each containing water dyed with a different color. She arrived at the jail where her husband was incarcerated and began a one woman world war of her own. Using her own blend of boundless courage, limitless faith in God, sheer cunning and enough charm to turn icy stares into melted mush, she marched right into the heavily guarded prison and announced, "We both know that you have arrested a completely innocent man, and on top of that he is also terribly ill." Showing none of the fear she must have felt, she continued, "At 8:00 A.M. he's got to have two teaspoons of this red medicine followed by a half teaspoon of the green." Ignoring any protest from the jailers, she continued, "Then at 2:00 P.M. the process must be reversed. At 4:30..." She risked her own life and kept right at it until my grandfather was released that very same day.

After settling in to a comfortable life in the United States where my grandfather was a pulpit rabbi and shochet (ritual slaughterer), he and Bubby decided to make aliyah to Israel in 1968. I was fortunate enough to study in Israel for two years in the early seventies and spent every other Shabbat, holidays and vacations with them.

During one holiday break I met a tall, refined gentleman who came to visit Bubby. He was a high ranking executive in Israel's largest insurance company. I asked him how he came to know Bubby. He told me that when the Nazis invaded his town, they viciously stormed into every Jewish home and rounded up everyone they could find. He left his wife and children to try to find them a hiding place, but in the ensuing mayhem and panic he was unable to find them again.

He spent month after month on the run from the Nazis, but eventually he, too, fell into the hands of the Russian police and was sent into the gulag. After many months of forced hard labor, he met a new prisoner who had first hand knowledge of how this man's entire family was exterminated.

"Your bubby gave me a whole new life."

"I didn't have much to live for before I received this news," he said wiping a tear from his cheek, "and afterwards I made the decision to leave my hopeless life and I tried to drown myself in a sewage ditch. When your grandmother found me I was more dead than alive. I don't know where she got the strength. But that little lady pulled me from the stench, cleaned me up, fed me for weeks and somehow convinced me to live."

Silently, he pulled out his wallet and showed me the pictures of the children, grandchildren and even great grandchildren who were born to him and his second wife in Israel. "Your bubby gave me a whole new life."

Whenever I stayed with my grandparents, I noticed that Bubby would disappear and leave the apartment for about 10 minutes every other morning. When I'd ask her about it, she'd say with mock seriousness, "You don't have to know everything. I've still got a few secrets I like to keep to myself." My curiosity mounting, I decided to find out what her big secret was.

I woke up very early one morning and just after she left the house, I ran over to the window facing the street in time to catch sight of her leaving the building. She was carrying a paper bag which she brought to the very edge of the sidewalk. Bubby tore open the bag, flattened it against the concrete and laid out its contents on top of the paper. A fresh roll, a yogurt and a small thermos bottle were all neatly arranged on the makeshift table cloth. And, as if right on cue, a bearded Yemenite Jew came down the street pushing a large waste basket on wheels with an old broom in his hands. He sat down on the sidewalk, smiled at Bubby and devoured every morsel.

Bubby, who spoke no Hebrew, kept up a steady patter of conversation with the elderly man, who certainly spoke no Yiddish. But Bubby's big heart could bring good cheer to anyone, anytime and did not suffer the limitations of language.

Bubby passed away at a ripe age on the seventh day of Adar, which is both the birthday and yahrzeit (date of passing) of the great Moses.

A fitting epitaph for someone who created miracles of redemption and hope for the downtrodden wherever she went.

Gluckel of Hameln: A Mother for the Ages

The Joys (?) of Passover Cleaning
Don’t Believe in Other Gods Versus God is One
Seeing Without Eyes
Why Shouldn’t We Eat Whatever We Want?
Comments
MOST POPULAR IN Family
Our privacy policy
Aish.com Is Looking for Great Writers