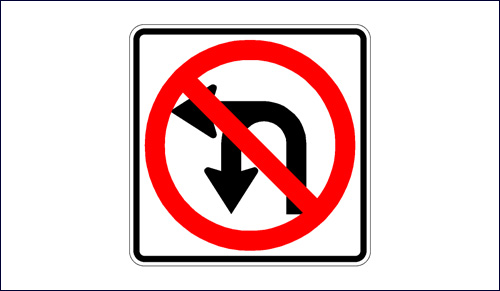 Some traffic signs that We Jews can understand, from my JTB (Jewish Traffic Blog).

After I wrote Part One, we, at Jewlarious, got this response from a dear reader, Zvi. “About 50 years ago I was at an intersection in Hartford Connecticut with a one way street going to the right. There were two traffic signs. The one directly ahead said "Do Not Enter"; the one on the right hand corner said "No Right Turn." Well, our brave Zvi did a U and looked for a bar that sold Manischewitz by the case (I’m paraphrasing).

So, for those of you who may wonder “When I write to writers to they look, read, care?” Hello, Zvi!

I asked, but my editor told me the shikker-liquor I wanted to send is over our budget.

Now, in my never-ending attempt to end the meshugas in the world by turning everything into something We Jews can understand, here are more traffic signs for my JTB (Jewish Traffic Blog). Fortunately bicycles are not our business.

WE CAN’T BELIEVE YOU ATE THE WHOLE THING

In an effort to fight zaftignicity, the JHD (Jewish Highway Department) provides us with scale check every 15 miles. (They double the number of signs after the major “We Eat” holidays, such as Rosh Hashana and Pesach.) This effort is not only healthful, but helpful in eliminating minor spats. Listen …

“What are you talking? I only ate a morsel of kugel!”

IT’S 10 O’CLOCK. DO YOU KNOW WHERE YOUR MOTHER IS?

This is a friendly reminder from the JHD that it’s not only getting later, but mama’s not getting any younger. She could be lying on the floor, like the ferkrimpted lady in the nightgown on the commercial screaming “HELP, I FELL!” What kind of child doesn’t care if her mother might or might not be on the linoleum? Call already! If she can’t crawl, at least you tried.

OY … BE PREPARED TO FLEE 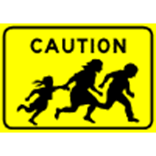 I learned this at my late bubbe’s knee-highs. Whenever we drove on a Sunday to “wisit” family and she saw (or thought she saw) something like this, she grabbed her “setchel” – a purse the size of the cargo hold on the good ship “Exodus” – and did inventory. Out would fly two briskets (with sides), bottles of chicken soup mit matzo balls, five pounds of chopped liver, a slew of seltzer bottles, three washcloths and four pairs of rubber running shoes with Dr. Scholl’s inserts. The woman was ready should there be a pogrom on Queens Boulevard.

You’re entering an area with winds over 20 mph. Now, this should be a nice day, however, not for those of us who bought hearing aids from LignerLots online. One slightly open window and the thingy will poof its way from your ear canal to the Suez one. CLOSE all windows if cheap Uncle Shmooie with the “WHAT? WHATS?” is napping in the backseat. 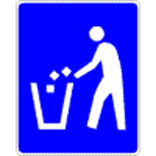 Ok. You took all the free samples from the bakery or slipped the leftovers (including other people’s) into your tote bag. The lady at Whole Foods or Tante Tilly, who aren’t “quirky” like you, have hit their Goniff app, and the JHD is alerting you to toss your stash before the G-patrol stops and cites you for EG “Exaggerated Gonifery.”

This particular sign is to alert some seniors, the British and impatient Jewish people that you MUST IMMEDIATELY STOP DRIVING ON THE SIDEWALK and get back on the big black road. Yes, all those other vehicles can be annoying, but then, so can driving through their houses.

Let’s say you picked up the I-95 to take you to Miami … or Route 90 in Israel to get to Eilat. Somewhere around either New Jersey or the Galilee, you’ve had it, especially on Sunday after the bagel buffet. These are very bad places to shluf while driving (although the other drivers in New Jersey are shlufferating). Should you nod off, assign a passenger to poke you, then, shluf away when you get to Trenton or the Dead Sea.

LISTEN TO YOUR WIFE ALREADY! 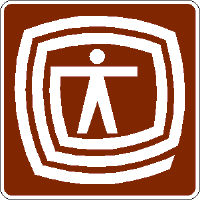 You’ve bought 36 maps, and the GPS lady has laryngitis. For three hours “she’s” stuck on: “Take-first-right. Destination-left 0.1 miles.” You’ve circled Utah (which is OK, if you weren’t going to Arizona). Your wife is screaming: “There’s another Chevron … Ask already.” Do NOT say: “But the GPS lady says we’re only 0.1 miles away!” or she’ll throw herself on the hood screaming “Vi tsu derleb ikh im shoyn tsu bagrobn!” (“I should outlive him long enough to bury him.”)

This sign, sensitively created by the JHS, is telling us there are trucks around with toxic chemicals that, when in the presence of human grepsers have the capacity to wipe out small third world nations. Should you see it, quickly do a U and leave great uncle Morris on the soft shoulder – with a week’s supply of Sen-Sen. 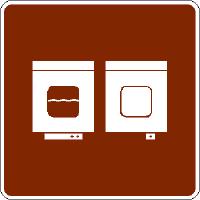 You’re in the car and do you know where your hot water bottle is? No? And this, with your back?! Go home immediately and bring it before your start shvitzing from the spasms, and ruining yet another Sunday with your mechutonim. A normal person would understand if you’re two hours late. Right?

AND WHILE WE’RE ON THE SUBJECT …

DID YOU TAKE THE CLOTHES OUT OF THE DRYER BEFORE WE LEFT?

Of course they didn’t, never mind adding 5 fabric sheets! Face it. By the time you get home, your favorite tops will resemble a relief map of Mongolia. The rule is: if you’re 50 miles or less from you destination, turn back. If you’re more than 50 miles away from home … adopt the basic sigh throughout your visit, and leave two hours early to “re-do.”

THE FEDS ARE ON THE JOB

This sign was created NOT by the JHD, but by The Federal Highway Administration in Washington D.C. Unless you have two lazy eyes, enough said?

Jewbama-mania
Near Death Experience Panel
The Western Wall: The Heart of the World
Ask the Right Question: Tisha B’Av
Comments
MOST POPULAR IN Jewlarious
Our privacy policy
Aish.com Is Looking for Great Writers