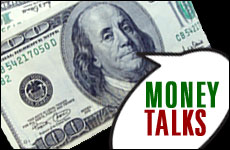 If you loved someone who refused to answer your calls, how would you get their attention?

One day I woke up to find that I had lots of money. I’m not even sure where it all came from. A year earlier I had almost no money, scraping together enough spare change to buy myself a loaf of black bread and jam. But I didn’t feel poor. As a 19-year-old American kid living alone in eastern Europe there was a pleasure in seeing what would happen to me from one day to the next. Where would I end up living? What would I end up eating? I had dropped out of college, started my own business, and was beyond that point in life of asking my parents for money.

Then suddenly the money started pouring in. Like a ball floating on water, I was being carried along the stream of a prospering life, a bit in awe of the force propelling me forward. I was hardly spiritual, but it was pretty obvious that Someone up there was helping me. Someone had given me a marketable talent and bumped me into all sorts of great business contacts. Here I was in Russia, advising the new so-called democrats how to capture the youth vote to get Yeltsin re-elected, creating rave parties stretching from Siberia to the Black Sea beaches, and promoting concerts off Red Square.

The money started pouring in. Then one day the Russian government defaulted on all its international loans.

I was no stockbroker, but it was the 1990s and Russian oil stocks were rising ten times in value in a day. “Security Exchange Commission” was a term that had not yet made it to Moscow and I had young venture capitalist friends with tips on major deals. I was suddenly invested. One of my friends and I shared a portfolio, and our Armenian broker was happy to let us buy on the credit we had from other profitable stocks.

Then one day the Russian government defaulted on all its international loans. The entire economy was halved overnight. Major dealmakers suddenly didn’t have enough cash to buy basic food items.

I had no idea what he was talking about. As far as I knew I was all paid up on the stocks I bought on credit. What I did not know was that my friend who had co-invested with me was not paid up, and the stocks were listed under my name.

The Creator of the Universe has lots of ways to send messages, but when you are busy day and night inventing new ways to entertain yourself, it’s hard for Him to get through. If you ran the universe, and very humbly and subtly wanted to make your presence known in someone’s life, where would you send the message? One of the most direct lines is to tamper with one's finances.

Maybe you’d put $100,000 into their bank account. Or maybe, if you could, you would freeze their account so they would start calling you.

The Almighty first filled my account with cash literally from nowhere. He got no return call from me. Then He emptied it. It took me a while to figure it out, but I eventually got the point and made the phone call. Russia in the 1990s was notorious for its “creative” debt collection methods. I had extra motivation to call. “God help me!!”

I set up a meeting with Arshak. We met on neutral ground, in a busy restaurant. I asked a friend to scout out the area before I arrived to make sure the “collection agency” wasn’t waiting for me, and to wait throughout the meeting to make sure no one whisked me away in a dark car.

I didn’t have the money, but they had mercy and agreed to give me time to pay.

During the years that passed it became clearer and clearer to me that everything that happens in our financial life, good and bad, is a message from Above.

I spent a few years in contact with Arshak. During that time I made a few lifestyle changes, including taking my savings and moving to Israel to learn more about getting a direct connection with the One who runs the world and its economy.

One night, not long after I’d arrived, a friend dragged me to a chassidic shul in the Mea Shearim section of Jerusalem. A chassid stopped me and asked: “You a business man?”

“How did you know?” I asked, impressed.

“You want stocks that will only go up in value and never crash?” I was smiling and urged him to continue.

“Every mitzvah is a stock” he whispered. “Live like a Jew. Every day is only up, up, up. You won’t lose, you’ll only gain.”

About a year later, an old friend called from Moscow. He was working at a large venture capital fund.

“You still own Tumyen Neft Oil Company? They are about to skyrocket. Listen, I’ll make you a deal. I’ll cover half of your old debt, and we’ll split the oil profits.”

I hung up the phone and thought about it.

"It was an honor doing business with someone as honest as you."

“What would my Sponsor want me to do?” I asked myself. The answer came quick. I uttered the following prayer to God:

“I got the message. I am not and was never a trader. I know that You want me to get on with life. I know that You don’t want me to spend my savings getting sucked into this game again, even if one day I might “strike it rich.” So let’s make a deal. If You agree to get Arshak to cancel my debt, I’ll sign him over all my stock. Let him make the money five years down the line. That’s his business, not mine. You’ll give me the money I need some other way. You always have.”

I got Arshak on the phone. He was very surprised to hear from me. “Let’s make a deal… what do you say?” We sat in silence for a few minutes, while I silently whispered a few more prayers. And he answered: “It’s a deal.”

After we closed the deal -- relieving me of $80,000 of debt without having paid a cent -- Arshak said to me, “I just want to let you know, it was an honor doing business with someone as honest as you. Next time you are in Moscow, we have to toast on champagne.”

For the first time in my life I felt I’d used my money like a true Jew.

I haven’t checked what happened to that Russian oil stock, but I do know that since then, the Jewish stocks I invested in have only gone up.

The Jewish Ethicist - The Whole Truth

The Jewish Ethicist - Respect and Suspect
Korach 5782: Visit to Lift the Spirit
That Time The Ivy League Found A Way To Limit Jewish Enrollment
Would You Rather Be Right or Happy?
Comments
MOST POPULAR IN Current Issues
Our privacy policy