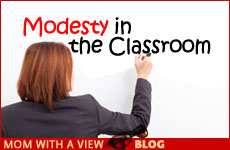 In today’s over-sexualized society, some school official are trying to bring some decorum and learning back to the classroom.

When I was in junior high, there was a strict dress code. This was not a religious mandate; the administration felt it was necessary in order to create a serious academic environment. Boys’ shirts needed to be buttoned all the way. Girls were forbidden to wear floor-length dresses or skirts (it was the early seventies, the era of the granny dress!) and any young lady caught wearing make-up was immediately sent home to wash it off.

So the recent story of a junior high in Petaluma, California that has instituted a ban on girls wearing pants that are “too tight” and distracting the boys struck a familiar chord.

In today’s “anything goes,” over-sexualized society, some school official are trying to bring some decorum and, dare I say it, learning back to the classroom.

And boy, are they getting attacked for it.

The arguments are not new – as Yogi Berra would say, “It’s déjà vu all over again.”

“Why should we have to dress differently just because the boys are distracted?” runs the tired yet familiar line from parents and teens. “Let them just control themselves.”

This line of reasoning disturbs me on two accounts.

One is the attitude of the parents, the experienced grown-ups in this scenario, the ones who are supposedly guiding their daughters to adulthood. What message do they want their girls to convey about who they are? How do they want members of the opposite sex to view their young daughters?

Yes, everyone needs to learn self-control. But basic human nature can’t be changed. It boils down to a simple idea that can’t be repeated often enough. “If you don’t want to be treated like an object, don’t dress like one.” It’s not sexism; it’s reality.

The other issue I have with the defiant response of the parents and their offspring is that it sets up an ‘us versus them’ dynamic rather than encouraging a spirit of cooperation.

Let me reiterate: Yes, boys (and men) need to exercise self-control. But we live in a world alongside boys and men. Most of us have people we love who are boys or men – fathers, brothers, sons and husbands. We want to make it easier for them to function and even thrive in this world of ours. We don’t live in a vacuum. We can’t dress with complete obliviousness to our impact on men (and the truth is that most girls wearing “too tight” pants are not oblivious at all!).

And before you attack me in the comment section, please get this straight: I am not saying the boys are not responsible to learn self-control. They are! This is a two-way street. But I am saying there is something we women can do as well, and it’s not just for the boys’ sake, it’s for our girls’ sake as well.

After all, we want to teach our daughters self-respect and a focus on their inner selves. We also want to teach them to appreciate and understand the men in their lives.

Junior High isn’t too early to teach this lesson and to encourage a sense of self among males and females that reflects character and not physicality. Let’s get the “too tight” pants, “too short” skirts, “too provocative” blouses out of the way so that their true beauty can shine through and the serious learning can occur. 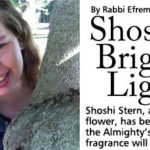 How Can You Defend Israel?6 min read