Your Mission for the Coming New Year 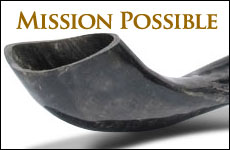 There can be no greater joy than successfully answering the question, "Who are you?"

Rosh Hashana is a day of paradoxes. On the one hand, it is the awesome Day of Judgment. The entire framework within which we will function in the coming year waits to be determined. Yet on Rosh Hashana night, as we dip our apples into honey and partake of the other symbols of all that we hope for in the coming year, a joyous, even playful, mood prevails.

The laws of Rosh Hashana further remind us that within the judgment itself there is cause for rejoicing. We enter the day freshly barbered as a sign of our confidence in a favorable judgment. On Rosh Hashana, we do not recite the vidui confession. Rather than focusing of past sins and seeking forgiveness, we look forward with optimism to the future.

When we properly understand the nature of the judgment on Rosh Hashana, however, the apparent paradox of rejoicing in judgment evaporates. We recognize that it is we who require the Divine Judgment, the annual opportunity for spiritual stocktaking. We summon God to judge us with the blasts of the Shofar that herald the convening of the Divine Tribunal. (Our voluntary submission to judgment arouses Divine Mercy; that is the secret of the Shofar.)

The Mishna describes every living being as passing before God "k'bnei Meron." The Talmud offers three understandings of this puzzling phrase, but the common thread running through all of them is that of our singularity. Either we are likened to sheep passing one by one under the staff of the shepherd to be counted, or to those traversing a steep ascent that allows only one person to pass at a time, or to the soldiers in the army of King David, each receiving their individual commands.

The task of Rosh Hashana is to help us identify the mission for which we were created.

Each of us will stand absolutely alone before God. And He will ask us one question: Who are you? What makes you different from anyone else who ever lived or ever will live? Why did I create you? The question terrifies us because we are so unaccustomed to thinking deeply about ourselves.

But we need this intense self-examination. For there can be no greater joy than successfully answering the question, and identifying the essence of our individuality. When we define that which makes us , we recognize that our lives have purpose, that we exist in order to reveal some aspect of God that no one else has or can ever reveal. Our existence is not accidental, but essential.

That is what we mean when we say in the Mussaf prayers that every created being passes before God – ‘'a man's actions and his mission." Each of us has a mission, and the task of Rosh Hashana is to help us identify the mission for which we were created, and in the process attach ourselves to the Almighty.

The Shofar reminds us of that original moment of literal inspiration in which God blew into Adam's nostrils the breath of life, and Adam became a truly living being. It is the voice of the soul struggling to become aware of itself.

But how do we identify our mission? First, we must know our strengths and talents. Rabbi Yisrael Salanter, the founder of the Mussar movement, used to say that it is tragic for a person not to know his weaknesses, but it is doubly tragic if a person does not know his strengths. The latter are the basis of our primary divine service in the world.

Just as we have to view our talents as gifts from God to enable us to fulfill our mission, so too must we know that our passions, those activities that give us a feeling of pleasure and fulfillment, are also given by Him. The world's greatest cellist Yo-Yo Ma relates that as a child he began playing the violin. But he felt no love for the violin, and was at best mediocre. Only when he took up the cello did his musical gifts fully manifest themselves.

And finally, we have to provide a social context for our gifts and passions. Each of us inevitably looks around at his community and sees much in need of improvement. Often, however, we tell ourselves that if we noticed the problem that everyone must have noticed, and those more talented, or energetic, or with more time on their hands will take care of it.

Yet the fact that we identified a particular situation in need of repair may itself be an indication that rectifying the situation is part of our mission. Shortly after he arrived in America, Yossele Rosenberger was asked by a fellow immigrant, who knew that his parents had run a clothing store in Vienna, how one checked for shatnez (a mixture of wool and linen) in America. He investigated and determined that no one knew the answer to that question.

It would have been the easiest thing in the world for Mr. Rosenberger to say to himself that many great rabbis had preceded him to America, and if they had done nothing about the situation there must not be a problem. But he understood that if he had been asked the question, it had fallen to him to find the solution. He devoted the next five or six years of his life to finding a cheap, efficient, and accurate test for shatnez, and then to convincing purchasers to avail themselves of his test. Through his efforts, knowledge of a Torah commandment, and the ability to observe the mitzvah, was revived among American religious Jewry, and eventually throughout the world.

By identifying the point of intersection between our talents, passions, and that which the society needs, we can begin to identify the mission for which we alone were created. The result of our inquiry need not be as grand as discovering a test for shatnez – it may be no more than raising our children as happy, alive Jews, a task for which we are both better suited and more committed than anyone else in the world.

By identifying the point of intersection between our talents, passions, and that which the society needs, we can begin to identify the mission for which we alone were created.

The judgment of Rosh Hashana looks forward, not backward; the focus on the day is on our mission for the future, not our past failures. Indeed until we have fully become aware of all that we can be, we cannot even appreciate the extent to which we have fallen short of the mark in the past. Without an alternate vision of our potential, we are unable to make the effort to extricate ourselves from all the patterns of past failure.

Now, armed with an awareness of our own ness, we can plot a new direction for the coming year. And with that vision for the future comes a renewed sense of purpose, a feeling of attachment to the Source of all life.

May we all be inscribed for a sweet and good year.

Climbing to the Top

A Womb for the Soul

Flying Low
How to Become Immortal
Judaism and Mental Health
Jews and the Chocolate Trade
Comments
MOST POPULAR IN Growth & Renewal
Our privacy policy
Aish.com Is Looking for Great Writers