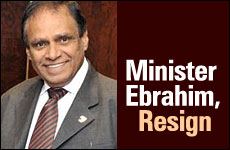 South Africa's Deputy Minister Ebrahim has been discouraging South Africans from visiting Israel. I sent him the following open letter, calling for his resignation.

You are a minister of the South African government, appointed to advance the interests of the Republic and the people of South Africa in an impartial and rational manner. As a citizen and as a national religious leader of South Africa, I object to the way in which you are abusing your high office to promote your own personal agenda. You obviously have a ‘blind spot’ when it comes to Israel; you lose your sense of objectivity and rationality when dealing with the Jewish State.

Most recently you have used your platform and title in an active campaign to prevent South Africans - and especially members of government - from visiting Israel. This is but one example of your irrational obsession with Israel to the detriment of the proper execution of your governmental duties. You have acted in breach of your government’s own foreign policy, in terms of which South Africa and Israel have full diplomatic relations.

Your actions hark back to apartheid-style control of information and censorship. Why would you try to prevent South Africans from travelling to Israel and seeing the situation for themselves? Do you think, Mr. Ebrahim, that the South African people are not as clever as you are, that they cannot think for themselves and that they need to be protected from the facts?

Are you worried that they will see that, in fact, there is no apartheid in Israel?

Maybe you are afraid - and rightly so - that if people go to Israel and see the situation for themselves their perspective will be completely different. Are you worried that they will see that, in fact, there is no apartheid in Israel? South Africans visiting Israel will find a multi-racial, multi-ethnic vibrant society where more than 1.5 million Arabs live as full and equal Israeli citizens, vote as part of a single national voters’ roll and have full legal rights in all areas of society. Are you concerned that when South Africans travel on buses, visit parks, malls, hospitals and university campuses, attend the Israeli Parliament and the Supreme Court they will find Jews and Arabs living and working together in complete equality?

Are you worried that our fellow South Africans may learn that successive Israeli governments have supported the establishment of a Palestinian State as part of a negotiated peace agreement? Are you concerned that South Africans may speak to Ehud Barak, the dovish former Prime Minister of Israel who desperately tried at the Camp David and Taba negotiations to create a Palestinian State, only to be rebuffed by the Palestinian leadership? Are you concerned that South Africans might hear for themselves directly from the current Israeli government how it seeks to return immediately to the negotiating table without preconditions, and that it is the Palestinian leadership that refuses to do so?

Maybe you are worried that our fellow South Africans may discover that the so-called “separation wall” is actually a security fence, that prior to its being erected waves of suicide bombers killed over 1,300 Israelis and wounded over 10,000, and that since its erection these attacks have stopped. Maybe you are afraid that South Africans might speak to members of Hamas, who openly call for the destruction of the State of Israel and the murder of all Jews and around the world.

Mr Ebrahim, your personal bias against Israel prevents you from fulfilling your legal and ethical duties as Minister of International Relations, who, with impartiality and sound judgment, is supposed to further peace, justice and South African strategic interests in the world. Your actions to discourage South Africans from travelling to Israel are but one manifestation of your extremist views. In so doing you are jeopardizing South Africa’s international credibility and strategic interests. It is indeed the ideological allies of Hamas and Hezbollah – Israel’s sworn enemies – who have also launched a terror campaign against Christian communities throughout Africa.

You are jeopardizing South Africa’s international credibility and strategic interests.

In recent months scores of churches have been burnt and hundreds of Christians have been murdered because of their faith. Nigeria, one of our key African partners, has borne the brunt of some of the worst attacks. As a leading African nation, South Africa must condemn these attacks and express support of and offer assistance to its fellow African governments in Nigeria, Somalia, Sudan and elsewhere. To South Africa’s shame, you have remained silent. You have been too hesitant and weak in condemning Syrian President Assad’s actions which have resulted in the deaths of more than 20,000 of his citizens and the displacement of nearly 150,000 refugees.

These are but a few examples of how your prejudice precludes you from fulfilling your role as a minister of this government. You seem to forget that your mandate is to serve the interests of the people and the government of South Africa and not your own personal allegiances. A judge who is biased or perceived to be so is legally and ethically required to remove himself from the case, in the interest of integrity, justice and truth. These same values require that you do the same and resign. Especially during such turbulent times, how does a minister of international relations discourage people from travelling and seeing for themselves? Why do you repeat the sins of the apartheid regime and shun dialogue with and understanding of the “other”?

Peace cannot be achieved by withdrawal and isolation; as the Book of Psalms (34:15) says: “Seek peace, and pursue it.” The dream of peace will only become a reality when people pro-actively pursue it, and move beyond their prejudices and preconceptions and truly understand the complex realities of the Middle East in an open-minded and balanced way. Your actions support the forces of extremism, hatred and violence, and undermine the forces of tolerance, freedom and peaceful negotiations. For the sake of peace and justice, we need more information, not less; we need more dialogue, not less; we need more connections with other societies, not less.

You clearly do not believe so, and hence you are unfit to hold public office. Do the honorable thing: resign.

Arafat's Personal Record
Korach 5782: Visit to Lift the Spirit
That Time The Ivy League Found A Way To Limit Jewish Enrollment
Would You Rather Be Right or Happy?
Comments
MOST POPULAR IN Israel
Our privacy policy