Michelangelo & the Meaning of the New Year 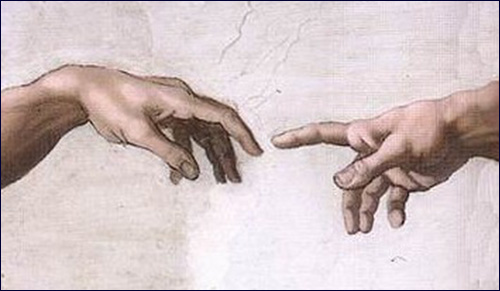 5774 or 2014? The theological debate behind the artist’s masterpiece.

Of all the masterpieces created by Michelangelo surely none is more universally acclaimed than his fresco on the ceiling of the Sistine Chapel depicting the creation of Adam.

What most people don’t know, however, is the fascinating story behind Michelangelo’s choice of subject matter – a decision motivated by the artist’s disagreement with the Pope of his time that has relevance to this day as we welcome a new year on what is commonly called the secular calendar.

Together with most of the Western world, we will start dating our checks and our schedules with the indication that we have moved on from 2013 to 2014. As part of a much larger society’s way of noting the passage of time, I too simply have no choice, even though it doesn’t agree with my reckoning. For me it is now 5774 on the Hebrew calendar. And this discrepancy points to a profound difference of perspective about God and about the meaning of history.

Jews and Judaism are the ones who brought the concept of monotheism to the world. One God created the entire world and all those who inhabit it. The first human being was created in His image and all those who came after carry within them this mark of divinity.

The concept of universalism is intrinsic to the biblical story of creation.

Why did God begin the story of mankind by creating only one person? The Talmud answers so that no man should be able ever to say to his fellow man, “my father is greater than your father” (Sanhedrin 37a). We are all related. One father for all people on earth makes everyone brothers and sisters in the truest sense of the word. Adam was not just one man – he was every man. Christian and Jew, black and white, American and Asian – we are all created by God “in his image.”

The concept of universalism is intrinsic to the biblical story of creation. And that is why Judaism maintains that the record of history must mark the beginning of time from the creation of Adam. It is humanity that gives meaning to creation.

Our calendar does not start counting years from the birth of Abraham, no matter how significant his life might be as our first patriarch. Nor do we claim that the past only becomes worthy of recognition from the time we became a people or even from the moment we received the Torah at Sinai. The year is now 5774. It is the number of years that frame the shared years of the human family.

But that is not the message of the calendar year 2014, whose meaning is steeped in a theological concept. 2014 chooses the birth of Jesus as the moment which offers all subsequent history meaning. By beginning the count of years with this event, there is a clear statement made: What happened before is insignificant.

Christianity replaced a Judaic calendar rooted in a universalistic vision with a particularistic view. Christianity for the longest time taught that salvation can only be achieved through acceptance of Jesus.

Michelangelo’s Defiance of the Church

And that’s where Michelangelo came into the picture.

It was in the early part of the 16th century that Pope Julius the second, wanting to leave an everlasting legacy of his papacy, commissioned Michelangelo to beautify the ceiling of the Sistine Chapel. His instructions were clear. He told the prominent artist he wanted frescoes painted that would illustrate the illustrious lives of Jesus and Mary.

Michelangelo had other plans. To achieve them he had to employ a daring ruse. He accepted the task only on condition that no one be allowed to interfere with his work while it was still in progress. To ensure that no one was able to view what he was doing during the 4 ½ years it took to complete the entire project, he had a canvas placed underneath him as he worked on a 60-foot high scaffolding, ostensibly to prevent any dripping of paint to the floor.

Michelangelo completely disregarded the Pope’s orders. 95% of its themes were taken from the Jewish Bible.

When the time came for unveiling his masterpiece, the Pope was dismayed to see that Michelangelo had completely disregarded his orders. The Sistine Chapel ceiling has no Jesus or Mary, nor for that matter any New Testament figures. 95% of its themes are taken from the Jewish Bible, and 5% are pagan!

How Michelangelo was able to get away with his life in the aftermath of his open disobedience to a papal mandate is a fascinating story in its own right, which I develop at great length in the book I co-authored with Roy Doliner, The Sistine Secrets: Michelangelo’s Forbidden Messages in the Heart of the Vatican. What I want to clarify here is Michelangelo’s motivation.

As a young boy, Michelangelo was adopted by Lorenzo de Medici, probably the wealthiest man in the world at the time. Because of his obvious brilliance, Michelangelo was granted the same tutors as those who taught Lorenzo’s own sons. The most prominent of these tutors was Pico della Mirandola, recognized not only for his genius but for his commitment to universalistic ideas and ideals that were far from commonly accepted in his time. Pico acknowledged that many of his views were shaped by his study of Torah and Jewish texts, and these - as well as his great interest in Kabbalah - he passed on to Michelangelo.

Michelangelo’s commission had been to have the Sistine Chapel ceiling convey the same concept as the Christian calendar: history begins with Jesus. But Michelangelo could not allow the reality of mankind’s common beginning, the spirit of universalism that infuses the first chapter of Genesis, to be rendered mute in the most famous of the church’s chapels. And so Michelangelo dared to feature most prominently in his frescoes the stories of the opening chapters of the Bible, beginning with the creation of Adam.

That is how perhaps the most famous painting of Western art came into being. If Michelangelo had to choose the date for this year he would likely agree that 5774 is preferable to 2014.