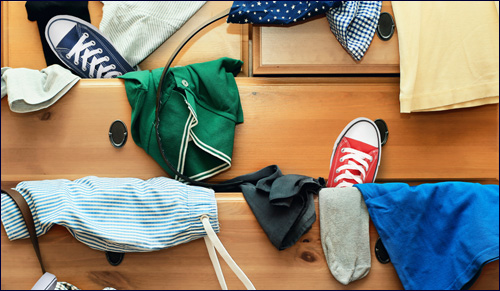 My grandfather had a Shed, my father has a Drawer, my brothers had their Room, and my husband has his Shelf. What these items have in common is that they are storage spaces for important possessions. For men.

I remember once opening my father’s Drawer. I didn’t really know what the Drawer contained; I just knew that occasionally, my father would remove some papers from the Drawer and pore over them with great concentration. At these times, we all knew not to disturb him. It didn’t make a difference if we did; my ‘daddy, do you want some supper?’ was answered with a vague, ‘purple is fine, dear.’ When dad perused the contents of the Drawer, he was in his own little world.

So when I opened the hallowed Drawer one day, I was disappointed not to find papers of great significance (no shocking wills or deathbed confessions). In fact, all that the Drawer contained was... bills and receipts. From, like, over a decade ago. Therefore, I did what any dutiful daughter would – I helpfully sorted them out. But when my father came home that day and opened his Drawer, he was beside himself.

‘Where’s that bill from 1990? The one from my landlord when I was in Yeshivah? Where’s the receipt for that Walkman I brought in 1985? What if I ever need to return it?!’

‘Oh no, oh no,’ my poor father moaned, clutching his now-graying hair. ‘I’m going to have to sort it all out again, aren’t I?’ and he proceeded to thoroughly mess up the order I had imposed in his Drawer.

Fine, I thought, feeling unappreciated, and went on to my next project; tidying my brothers Room. This was no simple task and it took me a good few hours while they were in cheder one Sunday. Feeling tired but accomplished, I greeted them that day with a cheerful, ‘guess what? I tidied your room for you!’

My brothers looked at me, speechless, then without a word ran upstairs to assess the damage.

‘Where’s all my stuff?’ the little one choked.

‘What stuff?’ I asked. I had sorted what was needed and threw out what was useless. Tidying up is that simple.

‘THE WIRE!’ yelled my other brother, ‘where is THE WIRE!’

‘What wire?’ I was confused. Who needed a wire? ‘I probably trashed it,’ I admitted.

‘My collection of rusty screws,’ my little brother sighed.

‘The spiders,’ both boys mourned, and marched upstairs to plaster a huge NO SISTERS ALLOWED sign on their bedroom door.

These unfortunate incidents came to mind when I noticed the accumulated mess on my husband’s Shelf. As we live in a small half-apartment in Israel, one shelf is all the space the poor man gets to store his personal belongings. The Shelf was just begging for a quick tidy-up. I started crumpling ancient receipts for coca-cola into little balls, when I remembered. My father’s Drawer. My brother’s Room. And now, my husband’s Shelf.

Taking a deep breath, I smoothed out the receipts, put them back on the Shelf, and closed the cupboard door.

That evening, upon opening the cupboard, my husband asked me why the receipts were not in the (incomprehensible) order he’d put them in. ‘I’m trying to compare the price of Coke over time,’ he said seriously, ‘I think they’re putting it on sale every so often.’

‘Really?’ said I, relating how that little project almost ended up crumpled in the bin. My husband paled when he heard.

He hasn’t gone so far as to put up a NO WIFE ALLOWED sign, but I got the message anyway. At least I’ve learned this about the men in my life: some things are sacred – apparently, Walkman and Coke receipts among them.

Don’t Ask the In-Laws This