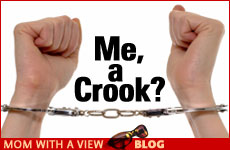 A librarian had the chutzpah to insinuate I'm a thief.

I visited my local library last week. My family and I are frequently library users and very excited that our community’s habits recently convinced the city to close the library on Saturdays and open it on Sundays instead!

But as thrilled as I am with that response that is not what sparked this column. I noticed that a book I had returned (actually a book on CD; my secret to getting on the treadmill every day!) was marked overdue. Something was wrong.

I am a familiar figure to the librarian at the checkout desk. But this problem fell under the responsibilities of the reference library with whom I had no prior relationship.

I explained the situation and while she called the library branch where the book belonged, I went (at her suggestion) to search the shelves to see if it had perhaps been misfiled at this branch instead. Sure enough, there it was. I was thrilled by how easily I found it. Mystery solved, problem cleared up, CD’s now on their way to their proper home.

Everybody happy – well, not quite.

“Since we don’t know when the book was returned,” the librarian informed me, “you still have to pay the fine.” I will confess up front that the fine was minimal ($1.40) and it was, as they say, the principle of the thing. I was puzzled and I (politely) said so. “I’m confused; if it’s your mistake, why do I have to pay the fine?”

“It’s not our mistake,” she asserted. “But I’ll reduce the fine by half.”

I wasn’t going to argue about 70 cents. I paid and left. But I was still puzzled. If it wasn’t their fault, how exactly did the book make it to the shelf? Who was to blame?

I certainly couldn’t have done it. Then I realized that was the only other possible explanation. Was she really suggesting that, in an effort to save $1.40 I had walked in with the CD’s, deliberately stuck them on the wrong shelf and then gone to her with my falsified sob story? I couldn’t believe it. I’m not that creative and frankly such an action would never have occurred to me. And even if, in some wild, diabolical moment it did, I certainly would never have acted on it.

Is her assumption that the library patrons are dishonest? Are guilty until proven otherwise? Has that been borne out by experience? Is it an appropriately cautious attitude or just a cynical mistrusting one? Is that reflective of library policy or her individual views of humanity?

Either way I was troubled and saddened by the experience. I love going to the library. I put tremendous value on the public service they provide. And I hate to think that the librarians view the users as deceitful criminals as opposed to enthusiastic readers.

The head librarian really just needs to train her employees to be more careful when reshelving the books. And she needs to train herself to give others the benefit of the doubt. What’s the point of being surrounded by all those books if you aren’t learning the most valuable of life’s lessons from them?

Marriage & Me
It Takes A Lot Of Faith To Be An Atheist
How Instagram Brought Back This Nostalgic Soup
What Makes Eli Run?
Comments
MOST POPULAR IN Family
Our privacy policy