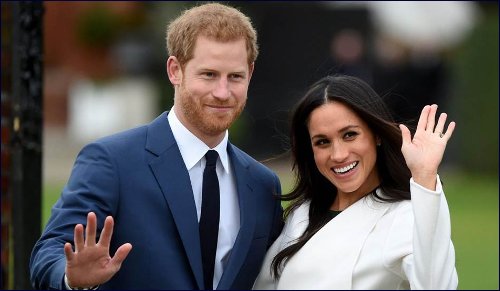 Five things we can learn from Prince Harry and Meghan Markle’s engagement announcement.

The internet is full of stories positing that Meghan Markle is Jewish. Some British tabloids have referred to Markle’s supposed “Jewish background”, especially in reference to a statement issued from Britain’s Westminster Abbey that, following church rules adopted in 2002, Markle, an American actress, would be able to marry in the historic church. (The couple recently announced they will wed on the grounds of Windsor Castle, instead.)

Left out of these speculative reports is the fact that it’s Markle’s previous divorce, not her supposed Jewish heritage, that would have disqualified her from marrying Prince Harry in the past. Markle’s first husband, Hollywood producer Trevor Engelson, is reportedly Jewish, but Meghan Markle decidedly is not. The daughter of a black mother and white father, even if her father is Jewish, which some publications have mentioned, according to Jewish law Meghan is not Jewish. And the actress's publicist has written, "Just to clarify… she is not Jewish."

When Prince William wed Kate Middleton in 2011, there was similar, and similarly mistaken, speculation that Kate was a Jew. One former BBC reporter went so far as to write a letter to The Times of London, erroneously declaring that she was. Even Birthright playfully fed into speculation about this imagined Jewish heritage; when Kate Middleton gave birth to Prince George in 2011, Birthright made him an outfit reading “His Royal Highness. Future Birthright Israel participant, 2031”.

2. Harry and Meghan are bucking a trend.

In getting engaged and planning their May 2018 wedding, Prince Harry and Ms. Markle are very publicly backing the institution of marriage, which is increasingly being sidelined in much of the world today.

According to a 2017 Pew Research Center survey, marriage is falling sharply out of favor in the US: from a peak of 72% in 1960, only half of Americans today are married. One of the fastest growing demographics are those who will never be tying the knot at all. About 20% of Americans over the age of 25 today have never married, more than double that figure from 1960.

Harry and Meghan’s engagement is something we should all celebrate.

3. They had a Jewish matchmaker.

Matchmakers are an old Jewish tradition and it seems that a Jewish matchmaker was responsible for introducing Prince Harry and Ms. Markle. In recent interviews, Prince Harry refused to reveal his matchmaker’s identity, saying only “It was through her” that the couple met. However, Britain’s Jewish Chronicle revealed that the royal shadchan was Misha Nonoo, a Jewish fashion designer who is close to the royal family.

While many people think of the negative stereotype of the meddling matchmaker in Fiddler on the Roof, Jewish matchmakers today are thriving, both online and in person, and countless couples owe their matrimonial happiness to matchmakers who helped them find the right one. Sometimes we all can use some help in finding and connecting with this special person.

While Prince Harry was planning on how he would pop the question a few weeks ago, Jews around the world were listening in synagogue to the story of the Torah’s first matchmaker, Eliezer. Abraham knew his son Isaac was special and wanted to help him find a woman who would match his unique qualities. Abraham asked his trusted servant Eliezer for help. Eliezer prayed to God for guidance, and soon after, he set eyes on Rebecca, Isaac’s bashert.

Like Harry and Meghan, we all can benefit from having a Jewish matchmaker in our corner when we need it.

4. The royal engagement is an answer to rising prejudice and hatred.

When I first read about Harry and Meghan’s engagement online, I scanned the “comments” section at the bottom of the article and did a double take. The venom and racism of the comments was so intense I had to check that I didn't accidentally stray onto a neo-Nazi website.

Meghan Markle is bi-racial; her father is white American and her mother African-American. She is also American and is divorced. For many people, it seems these qualities make her ripe for horrendous insult. In 2016, Prince Harry issued a rare public statement, saying that Meghan Markle had been subject to “a wave of abuse and harassment” and that the racism of opinion pieces and media trolls made him fear for her safety.

The racist bile being directed at Ms. Markle is part of an overall resurgence of hate that’s targeting not only her, but Jews, in much the world today.

Against this rising tide of hatred, it’s important to take a stand and speak out, condemning racism, anti-Semitism and prejudice, whenever we encounter it. Harry and Meghan’s engagement is a vote for optimism and the future, and a rebuttal of some of the loathing and bile in the world today.

While it might sound strange in English to respond to the news of “I got engaged!” with a reply of “Good luck!”, this response actually makes a lot of sense. By wishing someone mazel tov, we’re really saying a prayer: asking for good fortune and for Divine help in someone’s future endeavors. Saying mazel tov recognizes that none of us are truly alone, that we all require help as we try to accomplish our goals. It also forges a connection, as we join with others in earnestly wishing another person well and to pray for their success.

With that in mind, we can all wish Harry and Meghan a huge, hearty Mazel Tov!

Pharaoh, Putin and Why This Passover is Different
Don’t Believe in Other Gods Versus God is One
Seeing Without Eyes
Why Shouldn’t We Eat Whatever We Want?
Comments
MOST POPULAR IN Current Issues
Our privacy policy
Aish.com Is Looking for Great Writers